Denis O’Donovan, his wife Collette, and their son Eoghan farm on the Wild Atlantic Way between Rosscarbery and Glandore where their Jersey cross Friesian herd produce high solids of milk of superb quality from grazed grass on Roury Hill Farm. The family are part of a group of West Cork farmers and hoteliers who form West Cork Farm Tours – an experience that showcases Irish farming practices and West Cork food produce to tourists from all over the world. Although West Cork Farm Tours is taking a break this season due to Covid-19, the farmers hope to welcome back visitors again next year.

Despite the fact that farming life remained relatively normal during lockdown, the O’Donovan family did cocoon with Denis’ parents during the three months. “My dad DJ is very active around the farm,” explains Denis “so we decided it was safer to cocoon together. It’s a very busy time of year for us anyway on the farm with calving, so it suited us. The only thing I really missed was being able to have the chat with the drivers who collect the milk for the co-op!”

Roury Hill is very much a family-run business with Colette and Eoghan rearing the calves in the spring. Calving thankfully went well this year with the good weather also playing its part in favour of farming conditions. “The cows go back in to calf easily so we run into very few difficulties,” says Denis. “As well, as soon as lockdown started, the weather improved,” he says “which was a godsend after such a bad February, not only for farming conditions but also for people’s mental health. It was the best spring we’ve seen in a long time and we were very lucky in West Cork that we got some rain as well.”

The cows on Roury Hill Farm graze grass for in and around 300 days a year and, as a result are very high in milk protein and butterfat.

Denis milks 160 cows so of course the milk price was a concern at the beginning of lockdown. “It took a small hit but the latest news is that it’s stabilising, so that’s very reassuring,” says Denis. “McDonald’s closing was also a concern as we had some dry cows to sell but that’s eased off now.

“A lot of milk producers don’t see where their product ends up. We’re very lucky in West Cork that we get to see the products made with our milk coming out of Carbery. Every last drop of our milk is used now.”

“The Greens in government is something we’re all interested in right now,” he emphasises. “There seems to be a lot of common sense to their approach although I believe the devil will be in the detail in regards to these micro-renewables they’re talking about.”

There are three key environmental issues that are pressing for farmers right now Denis points out.

The first is Carbon footprint. “We’re actually world leaders in this,” he explains.

Ireland’s carbon footprint for food is good and has improved through better animal breeding, grassland management and utilisation of animal manures.

“Ninety per cent of the world’s milk is produced from grain fed cattle,” says Denis. The ground has to be ploughed every year to grow this grain and every time you plough the field you release carbon into the atmosphere.” Irish cows spend as many as 300 days of the year grazing on grass.

However total emissions from agriculture are increasing and this is where the main pressure lies for Irish farmers. “This is where we get caught out,” says Denis. “We have a bigger cattle herd since the ending of milk quotas but cutting the national herd might be a great idea in theory – you might cut the emissions straight away but from a global point of view the milk will be produced somewhere else at a much higher carbon footprint and higher water usage – but it makes no sense in the bigger picture.”

There are a number of ways in which Irish farmers can reduce greenhouse gas emissions.

“We need to spread fertiliser smarter for a start,” says Denis.

He continues, “You may have noticed that there isn’t the strong smell or black fields like there used to be before with slurry spreading and this is because more and more farmers are now using LESS.”

Ninety per cent of slurry on Roury Hill Farm is now spread using LESS and Denis aims to increase that amount to 100 per cent in a few years.

Fertiliser nitrogen also plays a role in emissions and water quality so farmers are now being encouraged to use protected urea nitrogen fertiliser. “It’s a little coating put over the granular fertiliser, which helps the grass to grow,” explains Denis, “which stops the emissions leaking up into the atmosphere. We’ll all be spreading this eventually and it will be a big win for emissions.”

The second environmental concern for farmers explains Denis is water usage. “Water is one of the world’s most limited resources and a lot of people don’t realise how quickly it’s actually running down,” says Denis “but here in Ireland farmers have the lowest water usage in the world. It only takes us seven litres of water to produce one litre of milk, which may sound like a lot, but the next best in the industry are the Californians who use 340 litres of water to produce one litre. We don’t realise how good we have it here and we need to mind it.”

“We’ll definitely be growing more clover,” says Denis, who has already introduced it into his pastures. Although he does note that there are a few problems still to be ironed out. ‘Bloat in the cattle is one,” he says, “and if you want to establish clover you have to kill off the other weeds; the spray for that has now been banned here.”

The last Common Agricultural Policy penalised farmers for having unproductive land or a hedgerow. This has now changed with farmers now being encouraged to grow trees and encourage biodiversity on their land.

“We live and work off the land and 99.9 per cent of farmers want to protect their environment,” says Denis passionately.

For now Denis, Collette and Eoghan are looking forward to some down time after a busy calving season. Although disappointed that the third season of West Cork Farm Tours, which was looking to be a busy one, has been put on hold, the family is looking forward to what next summer will bring, and they’ll be ready to showcase West Cork farming practices and food produce. They may even get in a family camping trip in the meantime!

Where the crow flies

Mon Jul 6 , 2020
Hungry Crow are five years in the markets. It was the May Bank Holiday five years ago when the Clonakilty purveyors of decadent delights in dark chocolate wandered through Skibbereen Market offering tasters.  The markets were shut down on their fifth anniversary this May Bank Holiday, so Niamh and Mark […] 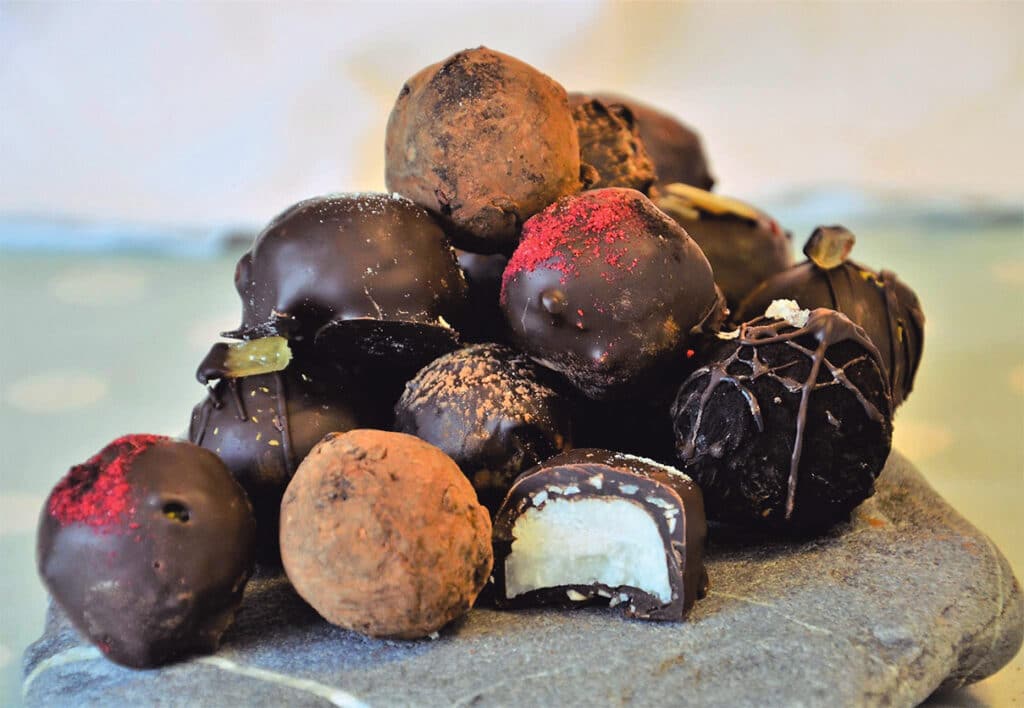