RIC officer John Hodnett, a native of Ardfield Rathbarry, lost his life at the Rineen Ambush in Co Clare 100 years ago. Conor Nyhan recounts the life and death of Constable Hodnett, a story that is symbolic of so many others in the Irish War of Independence but one that has been largely forgotten.

John Hodnett was born on June 13, 1889 in the townland of Camus, Ardfield to James Hodnett and his wife Mary Corcoran. The couple had married in 1884 in Ardfield Catholic Church and the 1911 census verifies that they went on to have nine children, five of whom survived to adulthood, including John, their only surviving boy.

We know that the family suffered great loss, which was not untypical for the times. One son, James, died in infancy and we know that the first-born son, Richard, a sprightly boy full of the joys of life, also died young. According to family lore, every afternoon, when returning from school in nearby Rathbarry, Richard would sing a song on the bridge across the road for his neighbour, known affectionately as Jamesy Jack, who lived in the bordering townland of Ballylibert. On one of those afternoons in 1893, Richard was suffering from a terrible headache and, on meeting his neighbour on the bridge, stopped briefly to say that he ‘couldn’t sing for him today as the pain in his head was so bad’. Richard had contracted meningitis and passed away at the end of a 12-day fight against this deadly illness. Just eight-years-old, he was buried in the family plot inside the old ruin at Old Rathbarry Cemetery, along with his aforementioned brother James and two other siblings who have yet to be identified.

John: Joining the RIC and the Rineen Ambush

On his RIC record John Hodnett is noted as a farmer by trade and first registered with the RIC on December 14, 1911. On June 19, 1912 he was stationed in Glasson, Co Westmeath and remained there until he was transferred to Ennistymon, Co Clare on September 11, 1917. Constable Hodnett was known to have been kept busy at the Petty Session Courts and was generally well liked in the area.

Three years after his posting, on Wednesday September 22, 1920 John was one of a party of RIC officers who travelled from their base in Ennistymon to Milltown Malbay. The RIC lorry passed safely through the IRA ambush position on the road between the two towns due to some confusion in the IRA over the numbers they faced. However, when it became clear that there was only one RIC lorry, it was attacked on its return journey from Milltown Malbay at a place known as Drummin Hill near Rineen. The lorry was hit by a grenade and blasted at close range by rifle and shotgun fire. The shooting was over in seconds, with four out of the six RIC men killed outright, including John Hodnett. Sergeant Michael Hynes (29) from Roscommon, survived for two days but died of his injuries. The sixth man managed to run about 300 yards before being shot dead. Five of the dead were Irish RIC officers: John Hodnett, Michael Hynes, Con Michael Harte (28) from Sligo, Con Michael Kelly (32) from Roscommon and Con John Maguire (21) from Mayo. The driver was an English Black and Tan, Reginald Hardman (21) from London. The IRA took their weapons and burned the lorry.

Not long after the lorry had been set ablaze, 10 more lorries of British Army troops arrived on the scene. They had been sent out to search for Alan Lendrum, the local magistrate who had gone missing earlier that day. A running fight developed, as four IRA riflemen kept the troops at bay while the other volunteers made their escape. Two IRA volunteers and several British soldiers were wounded in the firing but none were killed.

News reached the Hodnett family in Camus that John had been tragically killed in the initial ambush and Michael Hurley of Ballyva (who would later marry John’s sister Kate) made the journey to Ennistymon to formally identify and accompany the body back to West Cork.

It is important to understand the context of these events, in a time when this part of West Cork was a hotbed of IRA activity. At the height of the struggle to gain independence, the Hodnett family would have been well aware of the local atmosphere; the Kilkerranmore company were an active unit in the vicinity and drew volunteers from the very area where John Hodnett was born and reared.

For these and other reasons, John’s requiem mass did not take place in his native parish of Ardfield. Instead, on the following Sunday, a mass was held in Clonakilty. Nine motor lorries of RIC officers and other military accompanied Constable Hodnett’s remains to the church, which were then taken to the family grave in Rathbarry Old Cemetery, where John’s father James had been buried only 18 months previous.

John’s mother Mary died in 1939 aged 77, having spent her final years with her daughter Ellen. John’s four surviving sisters all married: Ellen inherited the farm and married Jeremiah Moloney in 1932 – Jeremiah was an active IRA volunteer during the troubles in his home place of Timoleague; Bessie married David White from Grange in 1924; Kate married Michael Hurley of Ballyva in 1929; Mary married Patrick O’Donovan of Ballyluck in 1936.

In 2010 members of the family, including John’s direct niece Mary Ellen Eady, attended a 90th commemoration event of the ambush, which involved a full military presence from the State. While it was a commemoration to honour those IRA volunteers who took part in the ambush, the descendant families of both John Hodnett and Michael Hynes were treated with exceptional sensitivity at every stage of the proceedings.

Unfortunately, Mary Ellen, along with John Hynes, who was a nephew of Sergeant Michael Hynes, did not live to see the centenary event this year, which has been marked but deferred for the moment. However, John Hodnett has a niece and nephew still alive and well, along with many grandnephews and grandnieces. A memorial plaque to the Hodnett family, including John, was recently laid at Rathbarry Old cemetery on the previously unmarked grave.

A memorial to the RIC members who died between 1836 and 1922 can be seen in St Paul’s Cathedral in London and another memorial can be viewed at Dublin Castle, which also includes those who perished in the Great War of 1914-1918.

John Hodnett was just 31-years-of-age when he was tragically shot. He was unmarried but family lore suggests that he may have been in a relationship with a local girl in Ennistymon. He joined the RIC long before the advent of the troubles at a time when the force was generally well respected.

1916 and the subsequent war of independence changed everything and attitudes hardened against the RIC. They found themselves in a difficult position as the struggle for independence evolved around them. In the words of Tony Killeen, the then Minister for Defence, at the 90th commemoration: “these were Irishmen who were victims of circumstance and bad timing”, finding themselves in a predicament that they could hardly have envisaged when joining the force. This is one view that can be taken but, of course, not the only one and people are free to interpret the events of the past in their own way.

It would appear that John Hodnett was not keen to continue the family tradition of farming at Camus. When his father passed away on New Year’s Day 1919, John remained with the force, despite being the only surviving son of the family. This would indicate that he was quite happy to remain in the RIC, relinquishing his entitlement to continue the family tradition of the generations that went before him and leaving the duty of continuity to his sister Ellen.

When the troubles ended it was common for people to not discuss the happenings of the past, as some events weighed heavily on people’s minds. However, in these years of important centenaries of our history, it is important to remember all those who lost their lives, and the heartbroken families that were left behind. All parts of our past should be acknowledged, however difficult that may be.

After 100 years John Hodnett’s grave has now been marked.

The dancing epidemic of 1518

Mon Dec 7 , 2020
“I do think it’s worth pointing out that epidemics of dancing had always been very rare – a big gap, for example, between the 1370s and 1518; so perhaps it is not all that surprising that the events in Strasbourg were not repeated soon after.” – John Waller With the […] 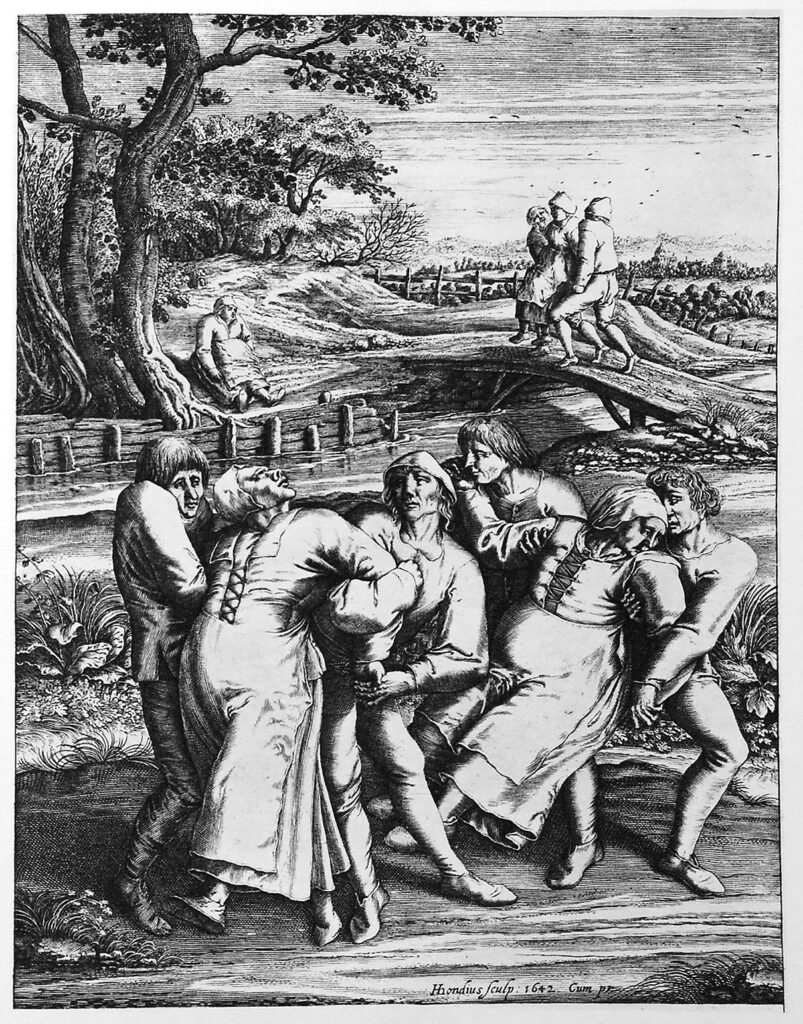