“I do think it’s worth pointing out that epidemics of dancing had always been very rare – a big gap, for example, between the 1370s and 1518; so perhaps it is not all that surprising that the events in Strasbourg were not repeated soon after.” – John Waller

With the news last month that Pfizer, BioNtech and Moderna have created effective Covid-19 vaccines, it should not be long before the Coronavirus is eradicated. The pandemic, ongoing since March, has changed all our lives irrevocably. It has given us habits that will long live with us, if not stay with us permanently. Soon, with some luck, there will be a safe worldwide vaccination program implemented. It will add Covid-19 to the long list of viruses that have been eliminated by vaccinations in our lifetime. Viruses such as polio, tetanus, bacterial influenza, hepatitis A, hepatitis B, rubella, measles, to name a few. All these viruses have been eliminated thanks to vaccines. Eliminated, not eradicated. The difference being, when a disease stops circulating in a region, it’s considered eliminated in that region. Polio, for example, was eliminated in the United States by 1979 after widespread vaccination efforts. If a particular disease is eliminated worldwide, it’s considered eradicated. To date, only one infectious disease that affects humans has been eradicated. In 1980, after decades of efforts by the World Health Organisation, the World Health Assembly endorsed a statement declaring smallpox eradicated. Proof beyond doubt that vaccines work. However, there is one case in history of an epidemic that is unexplained. In 1518 one of the strangest epidemics in recorded history struck the city of Strasbourg.

On July 14, 1518, in the French town of Strasbourg, a woman named Frau Troffea stepped out of her home and began dancing involuntarily. Soon, she had a large crowd around her. Some clapped, some laughed while some just gazed in awe. The event was intriguing since Troffea had no control over her dancing. Neither did she start out of choice, nor did she know how to stop. Rather, she was suffering from what came to be known as the ‘dancing mania’ or ‘dancing plague’. To everyone’s horror, Troffea kept dancing for six days. She would collapse out of exhaustion each night; her shoes soaked in blood, but would wake up the next morning only to start dancing again.

In Europe of the 16th century, dancing mania was not a new disease. It had been in existence since the seventh century, occurring in phases with long gaps in between. It is said to have reached its peak in the 15th and 16th centuries though, infecting thousands of people, and killing hundreds; historical documents from the time suggest as many as 15 people a day died from the illness. There are several cases where a dancing epidemic is recorded, places such as the German town of Kölbigk on Christmas Eve 1021 or another in the German town of Erfurt in 1247. Shortly after, 200 people are said to have danced impiously on a bridge over the Moselle River in Maastricht until it collapsed, drowning them all. Likewise, dozens of medieval authors recount the terrible compulsion to dance and note that in 1374, the dancing epidemic swept across western Germany, the Low Countries, and north eastern France. Chronicles agree that thousands of people danced in agony for days or weeks, screaming of terrible visions and imploring priests and monks to save their souls. A few decades later, the abbot of a monastery near the city of Trier recalled “an amazing epidemic” in which a collection of hallucinating dancers hopped and leapt for as long as six months, some of them dying after breaking “ribs or loins” but it was in France that the most famous and well-documented case occurred.

On a far larger scale was the outbreak that struck the city of Strasbourg in 1518, consuming as many as 400 people. One record states that it claimed, for a brief period at least, about 15 lives a day, as men, women, and children danced in the punishing summer heat. Having begun in July, by August the dancing epidemic had claimed as many as 400 victims. With no other explanation for the phenomenon, local physicians blamed it on “hot blood” and suggested the afflicted simply gyrate the fever away. A stage was constructed and professional dancers were brought in. The town even hired a band to provide backing music, but it wasn’t long before the marathon started to take its toll. Many dancers collapsed from sheer exhaustion. Some even died from strokes and heart attacks. The strange episode didn’t end until September, when the dancers were whisked away to a mountaintop shrine to pray for absolution. They prayed to St. Vitus, who was a Catholic saint who pious 16th century Europeans believed had the power to curse people with a dancing plague. They also believed he could absolve them of the disease. The epidemic is also sometimes referred to as St. Vitus’s dance.

With no known reason or cure, but with deaths mounting day after day, it seemed praying was the only resolution to this mysterious illness. But what could cause people to literally dance themselves to death from exhaustion? The most widely accepted theory is that of American medical historian John Waller, who laid out in several papers his reasons for believing that the dancing plague was a form of mass psychogenic disorder. Such outbreaks take place under circumstances of extreme stress and generally take form based on local fears. In the case of the dancing plague of 1518, Waller cited a series of famines and the presence of such diseases as smallpox and syphilis as the overwhelming stressors affecting residents of Strasbourg. He further maintained that there was a local belief that those who failed to propitiate St. Vitus, patron saint of epileptics and of dancers, would be cursed by being forced to dance.

When combined with the horrors of disease and famine, both of which were tearing through Strasbourg in 1518, the St. Vitus superstition may have triggered a stress-induced hysteria that took hold of much of the city. Other theories have suggested the dancers were members of a religious cult, or even that they accidentally ingested ergot, a toxic mould that grows on damp rye and produces spasms and hallucinations. Epidemics of ergotism certainly occurred in medieval Europe when people ate contaminated flour.

Ergotamine is the main psychoactive product of ergot fungi; it is structurally related to the drug lysergic acid diethylamide (LSD-25) and is the substance from which LSD-25 was originally synthesised. The same fungus has also been implicated in other major historical anomalies, including the Salem witch trials, although ergot alone would not cause unusual behaviour or hallucinations, except when combined with opiates. But this theory doesn’t seem tenable, since it is unlikely that those poisoned by ergot could have danced for days at a time. Nor would so many people have reacted to its psychotropic chemicals in the same way. The ergotism theory also fails to explain why virtually every outbreak occurred somewhere along the Rhine and Moselle Rivers, areas linked by water but with quite different climates and crops. We do know, however, that the victims of dancing epidemics were experiencing altered states of consciousness – this is indicated by their extraordinary levels of endurance. In a trance state, they would have been far less conscious of their physical exhaustion and pain throughout their bodies.

Moreover, these outbreaks nearly always struck in, or close to, cities affected by earlier dancing epidemics. In short, the epidemiological picture is strikingly consistent with a form of cultural contagion. Only where there was a pre-existing belief in a dancing curse could psychological distress be converted into the form of a frantic dance. Every so often, when physical and mental distress rendered people more than usually suggestible, the spectre of the dancing plague could quickly return. All it then took was for one or a few poor souls – believing themselves to have been subject to the curse – to slip into a spontaneous trance. Then they would unconsciously act out the part of the accursed: dancing, leaping, and hopping for days on end.

On why the dancing plague did not occur after the 16th century, Waller explained: “This is an area for speculation alone. I do think it’s worth pointing out that epidemics of dancing had always been very rare – a big gap, for example, between the 1370s and 1518; so perhaps it is not all that surprising that the events in Strasbourg were not repeated soon after.

“And, by the late 1600s, the educated were less likely to lend credence to cursing saints,” he said.

Mon Dec 7 , 2020
Fightin’ Tom Sweeny, a US Army General and Fenian, was born in Dunmanway town on Christmas Day two centuries ago. He now lies in Greenwood Cemetery in Brooklyn, New York. Pauline Murphy shares her research on the extraordinary life of this born survivor . Thomas William Sweeny was born in […] 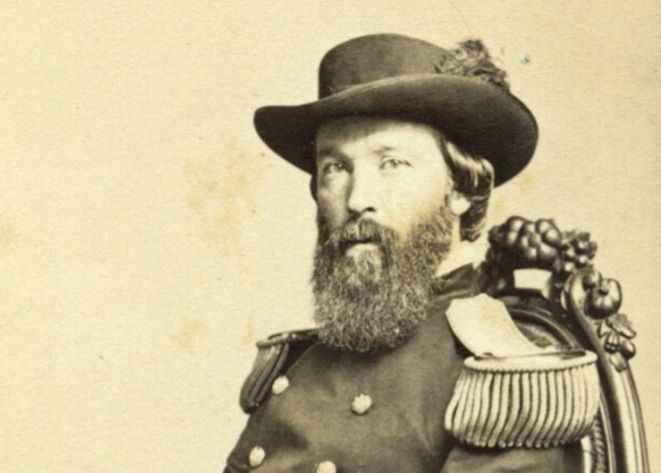