This morning I noticed the above plant growing on the wall of an old stone building. It is a familiar plant and its botanical name is ‘Umbilicus ruperstris’. It is more commonly known as wall pennywort or ‘Cornán chaisil’, ‘Cornán Leacáin’, and ‘Lus na Pingne’ in Irish.

This is a very useful herb to demonstrate the diverse sources that contribute to our knowledge of a herb today.

Before the fall of the old Gaelic order in the seventeenth century, the hereditary medical families were busy translating the new European medical texts, from the universities of Salerno and Montpelier, into Irish for use in Irish medical schools. These translated texts would build on the oral tradition that formed the basis of indigenous medical learning up to this point and would add another layer of expertise. Wall pennywort is one herb mentioned in a manuscript written in 1415 and it is one for which no Galenic tradition exists. The writer of this manuscript, Ó Cuinn, tells us that wall pennywort is cold and wet and that it softens and disseminates swelling. He also advises the application of this herb in a salve…there are other herbs in the formula also…for all chest troubles.

However, Culpeper’s herbal, written in 1653, tells us that wall pennywort is useful in hot distempers of the liver, that it provokes urine and takes off the heat and sharpness thereof. Culpeper also tells us that the juice applied externally helps shingles, St. Anthony’s fire, and the ‘pin’ and inflammation of the piles. It was also deemed helpful against kibes (ulcerated chilblains especially one on the heel) and chilblains.

The seventeenth century was a tumultuous time in Ireland and by the middle of that century the Irish medical schools were no more. A lot of land had changed hands and the immigrants had no knowledge of Irish or the flora of the Irish countryside. We may assume that Culpeper’s herbal, written in English, was a very useful item to have in one’s baggage coming to this ‘barbaric isle.’ The lack of Irish must have been a problem for these early settlers because if they could not identify a herb, not being versed in Irish, they had no way of finding it. Keogh, a clergyman in Mitchelstown, resolved this problem when he wrote his herbal in 1735, as he spelt the Irish word for the herb phonetically. This allowed his reader to pronounce the word correctly, or at least in some fashion, thus allowing them to ask an Irish speaker to locate it for them. Keogh’s information on wall pennywort is much the same as Culpeper. Three centuries on, Allen and Hatfield’s excellent tome on ‘Medicinal Plants in Folk Tradition’ tells us that this herb was used for,

And Wyss in ‘Ireland’s Generous Nature’ (2014) adds to this account by telling us the following.

• Mixed with ivy to treat warts, corns in Waterford, and bladder stones (Williams 1993)

I love the idea of using pennywort for corns, which are hard and dry. As Ó Cuinn says, this herb softens and disseminates, so it is the perfect antidote to those little hard pebbles that plague us at times.

The table at the end of this article shows how the use of ‘Umbilicus rupestris’ for chest complaints continued in the oral tradition for over five centuries and reappears in the National Folklore Collection in 1938, which is also cited by Allen & Hatfield. It is also possible to see in this chart how Culpeper’s use for this herb entered into vernacular use or may reflect an Irish indigenous tradition.

Current research into this herb is rather sparse but the leaves are eaten raw in Sicily; (Garacia et al 2018) and Massinissa et al (2017) have concluded that it has a “significant effect on urinary excretion of electrolytes but the molecules responsible of this effect have to be determined”. Whether this experiment on rats will be the same with humans remains to be seen.

All in all tradition, and current research is telling us, there is a lot more potential in this common plant than we realise.

At-home treatments while we wait for salons to re-open

Tue Apr 6 , 2021
It’s safe to say we are all in need of a little self-care right now and while you might not be able to escape to a real-life retreat and have a professional work their magic on you, here are a selection of products you might like to try at home […] 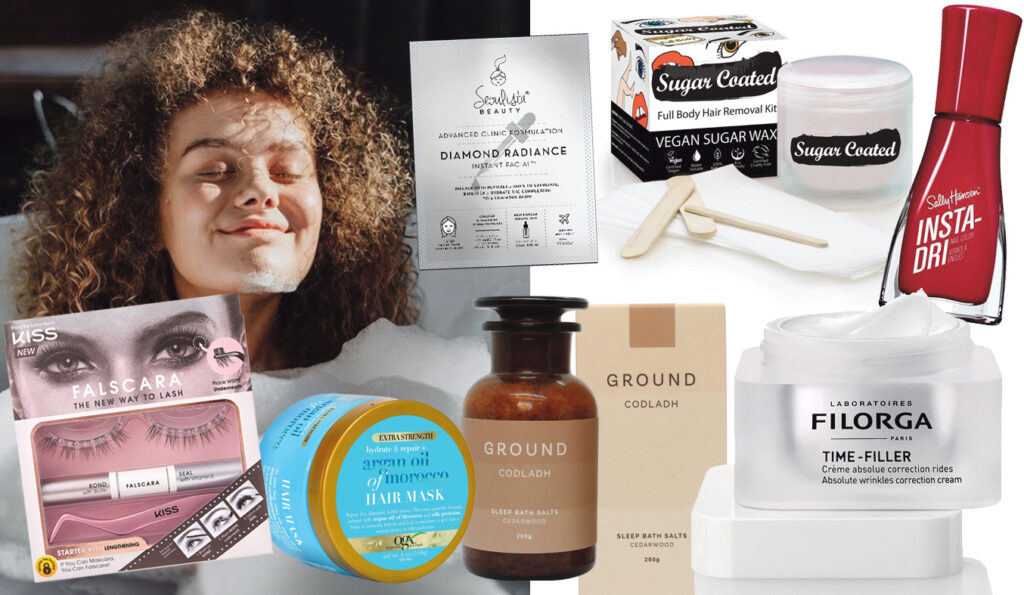