Kelly Mellerick, one of the volunteers who helps run the My Lovely Horse Rescue (MLHR) Cork centre, talks to West Cork People about why the charity is calling for a ban on animal tethering.

Based in Cobh, on the family farm of Jeannette O’Connell, My Lovely Horse Rescue centre is currently home to around 30 equines. A number of other horses rescued by the charity are fostered out to homes in Cork and Kerry.

Kelly, a full-time property manager, started fostering horses seven years ago. “Over the last 15 years or so I’ve become very aware of the equine crisis throughout Ireland and particularly in my own area in Cork City and County,” she explains. After attending a seminar that highlighted the plight of urban horses, Kelly’s interest and awareness increased and, in October 2018 the My Lovely Horse farm was set up when Jeanette O’Connell donated a seven-acre farm, along with 22 acres of land donated by Louisa Heckett in Cobh to My Lovely Horse Rescue.

“We’re very lucky that our team has grown and we now have a 12-strong volunteer group in the Cork centre,” she says. “Everyone pulls their weight and it’s only because of the number of volunteers we have that we can house the number of horses we have.”

Fundraising activities have been severely impacted by the pandemic so the charity has had to rely on public donations to keep it going.

“It doesn’t take a lot to look after an animal properly,” says Kelly passionately. “When it comes to the urban horse, our biggest concern is that they are being tethered in unsuitable sites and injuring themselves as a result. In some cases, they are even being taunted and abused by kids.

“Horses are flight animals and get scared easily, by loud noise or quick movement and their instinct is to run, which is impossible if they’re tethered,” says Kelly.

They are also grazing animals and need a constant supply of grass, which at this time of year doesn’t provide enough nutrition and needs to be supplemented by hay. Some of the lands that horses are kept on in urban areas don’t provide adequate foraging and they should always be subsidised with hay.”

Worming or rather lack of it is also an issue for horses. “Worms can cause serious blockages in the gut, causing colic, and death, if not treated in time,” explains Kelly.

“Tethering is not illegal and doesn’t get sufficient coverage in the Animal Health and Welfare Act,” she says. The My Lovely Horse Rescue team had to deal with a horrific case involving a tethered cob pony in March. “We were called out to a little cob pony that was tied in a 20-acre field.” The horse, which the volunteers named ‘Lady Jane’ had become so tightly bound up in her rope for a week or more, that the rope had cut through three of her legs. “She was cut so badly on one of her forelegs that the cannon bone was exposed,” says Kelly.

The little pony was saturated in bog mud and suffering from hypothermia when spotted by a man out walking his dog. “It took seven of us to get her up out of the bog and back to the Rescue,” says Kelly. “I’ve never felt a horse so cold.”

“Obviously whoever tied her up and left her there, walked away and never looked back,” she says. “We found no evidence of buckets for water and the area she was confined to with the rope was pure muck. It was heart-breaking to see.”

Unfortunately it was too late for ‘Lady Jane’, who had to be put to sleep two days after being rescued.

“We want a ban on tethering; we’ve had too many cases of hurt horses come our way because of it. There is no reason that any animal should be tethered. At the end of the day it goes against the ‘five freedoms’ that an animal should be granted.” Under the Animal Welfare Act 2013, people are obliged to provide the ‘five freedoms’ to animals under their care: freedom from hunger and thirst, freedom from discomfort (by providing adequate living conditions), freedom from pain, injury and disease, freedom to express normal behaviour, and freedom from fear and distress. “‘Lady Jane’ was denied every one of those freedoms,” says Kelly. The Act isn’t sufficiently covering those freedoms. We come across so many animals that have choked to death, severed through tissue to the bone or suffered permanent damage to ligaments or tendons. It’s just crazy that there isn’t an all-out ban on any kind of tethering.”

Kelly’s advice to the public on seeing a tethered animal is to report it to the ISPCA or the Department of Agriculture who then, if necessary, liaise with the My Lovely Horse Rescue team.

“A tethered horse should be ideally checked two or three times a day and that’s not happening. The sickening thing about Lady Jane is that she was tethered in the middle of a 20-acre field, without shelter, exposed to the elements. She couldn’t do anything to save herself and her injuries were horrific.

“A horse can drink up to 50 litres a day and these owners are just leaving them there without sufficient drinking water or food and unable to defend themselves from animal or human because they are tethered. It’s just wrong on every level,” she says passionately. We have an over-supply of horses in Ireland with indiscriminate breeding. There isn’t enough resources for successful enforcement of the current licencing laws and this needs to change.”

Kelly is appealing to anyone in the West Cork area with the land and inclination to foster a horse. “West Cork is very supportive of us and we already have a number of people fostering horses in the area,” she says. “We recommend one acre per horse but we do a home check and give support and advice.” Anyone fostering a horse has the full support of the My Lovely Horse team behind them and veterinary charges and so on are all covered by the charity.

For more information or to make a donation go to www.mylovelyhorserescue.com

The return of the Swallow

Tue Apr 6 , 2021
Skimming low over our fields and lakes in pursuit of insects, the swallow is a familiar and welcome sight. Its confiding nature and its habit of building a nest so close to our homes endears it to everybody. We eagerly await the return of the swallow each spring and its […] 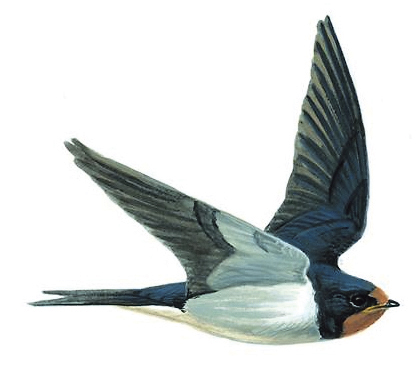