With the world watching on in horror as Iran hands out death sentences to anti-government protestors, the Iran of today under supreme leader Ayatollah Khamenei, where women are treated as second-class citizens, forced to wear the hijab (Islamic head covering) in public and punished by Morality Police for non-compliance, is a very different Iran to the one that Parvin (Gholami) Branch grew up in. The longterm West Cork resident is praying that the arrest and death of Mahsa Amini and so many other women protestors will not be in vain and the women of Iran will know the civil rights that she took for granted growing up in her home country.

Parvin, 74, reflects to Mary O’Brien on her childhood and the path that brought her to Rossmore in West Cork, where she raised her two children Samira and Robert with her husband Martin, and where for many years the couple ran a busy ceramics business together.

Parvin grew up in Abadan, a port city and oil refining centre in the southwest of Iran. Her childhood was during the period of the last Shah of Iran’s reign, a time when women’s rights had improved significantly.

“You were free to do what you liked then, to dress as you wished, to be religious or not religious. Nothing was forced on people, there was a lot of freedom,” she remembers.

One of seven children, Parvin says her mother and father were affectionate, caring parents. “If they rowed, it was never in front of us,” she shares.

Her father, an engineer, did not practice any kind of religion. He encouraged his children to choose their own beliefs. “He was the very opposite of my grandfather, who prayed five times a day and insisted the women in his family wore a chador,” says Parvin. (A chador is a large piece of cloth that is wrapped around the head and upper body leaving only the face exposed).

“My father was very liberal, never interfered and I think because of that we children always behaved,” says Parvin.

“He had a very good job so we were quite well off but he was not at all materialistic,” she says. Parvin’s father preferred to spend money on his family’s education, also supporting many of his relatives and their families. “We were given two pairs of shoes in a year, one for school, the other for Nowruz, the springtime celebration.”

Celebrated today by Iranians and non-Iranians all over the world, the roots of the Nowruz celebration are as a feast day in Zoroastrianism, a religion practiced in ancient Persia that viewed the arrival of spring as a victory over darkness. The holiday survived the Islamic conquest of Persia in the seventh century.

Traditionally the new year begins the second the vernal equinox does. “I remember being woken up by my father in the early hours of the morning for the feast,” says Parvin nostalgically. “The table would be laid with all sorts of sweets, fruits, delicious dishes; and always seven food items beginning with ’S’ for good luck.”

Parvin was a passionate dancer and gave dance classes – the Tango, Cha Cha and Square dance – to students at the University in Abadan.

“In those days, where we lived was very influenced by the West,” she says. “Women wore western-style clothing, went to nightclubs, fancy dress parties, and while women didn’t really drink, alcohol was not prohibited,” she says.

In 1967, after completing a Diploma in Natural Science with a dream of becoming a botanist, Parvin left Iran for England. “There was only one university in Iran offering a course in botany at the time so the choice was very limited,” she explains.

In England, her path changed course and she went on to train as a nurse and midwife. “I fell in love with London, the nightlife, pop festivals, I was a big Rolling Stones fan,” she says. She joined a soup round for the homeless, got engaged to an Irishman, a match that didn’t work out, and met her husband Martin.

“I met Martin at a pop festival,” says Parvin. “He was the brother of the girl I was sharing an apartment with. I remember thinking at the time that he very rigid really,” she laughs. “He was dressed in a suit jacket and tie.”

Her first impression of him softened as they got to know each other and the pair became good friends before falling in love. “We ended up hitchhiking around Africa together,” says Parvin.

Martin still wears a suit jacket today. “It’s not the style he likes, it’s the pockets…he carries his office in them,” says Parvin smiling.

Martin is a ceramicist. “He made sculptures and fantastic big vases in those days, he was always pushing the limits,” says Parvin.

In 1974, the couple married in a simple ceremony at the Iranian embassy in London. They honeymooned in Iran. “At the time it was mandatory for women to serve for a period of time in the army in the Iran and, as Christian marriages were not recognised there, Martin became a Muslim before our marriage, so I could go back without the risk of being conscripted,” says Parvin.

Five years later, in 1979, the Islamic Revolution happened in Iran, with women’s rights restricted almost overnight: Women lost the right to divorce, custody of a child, had to adhere to a strict public dress code and the age of marriage for girls dropped from 18 to nine-years-old.

“My parents managed to get out just in time,” says Parvin. “They actually left the same day as the Shah, amidst all the confusion.” Parvin’s parents joined some of her siblings in America.

After getting married and living in the UK for a time, Martin and Parvin bought a van and came to Ireland on holiday with their young daughter Samira. They landed in West Cork to visit one of Martin’s college tutors, which is when the seed of the idea of settling here permanently was planted. “Our friend suggested we look for an old house to do up in the countryside, which is exactly what we did,” says Parvin.

After the holiday, Martin returned and found a property on half an acre in Rossmore. “After renovations, we moved out of our tiny terraced house in Rochdale, Lancashire, packing our bags and the children into the van and coming back to live in West Cork for good,” says Parvin.

She recalls the moment they drove up to the house in West Cork. “I remember being over the moon,” she says. “I stepped out of the van and my heels sank into the mud…I was so happy I shouted ‘I love this place in the mud’” she laughs.

Now retired from their pottery business, Martin and Parvin both still share a love of music and are passionate members of a local choir.

In 2001, Parvin experienced a very different Iran to the one she grew up in. “I took my daughter Samira with me to visit family. It was awful. Women had no rights, we had to cover up all of the time and were constantly fearful of doing something wrong when we did go outdoors.”

A nephew and a niece are the only members of Parvin’s family remaining in Iran today. “They have applied to get out,” she says. “I really hope they do and I hope that the bravery of the women protesting in Iran will be rewarded with change. I pray for it.”

Mon Dec 5 , 2022
The Museum of Song, an uplifting song collecting project, co-created by artists Tess Leak and Sharon Whooley, has now been expanded to include members of the Ukrainian community in West Cork. Mary O’Brien finds out more about this collaborative project. A Museum of Song Ireland and Ukraine, which debuted at […] 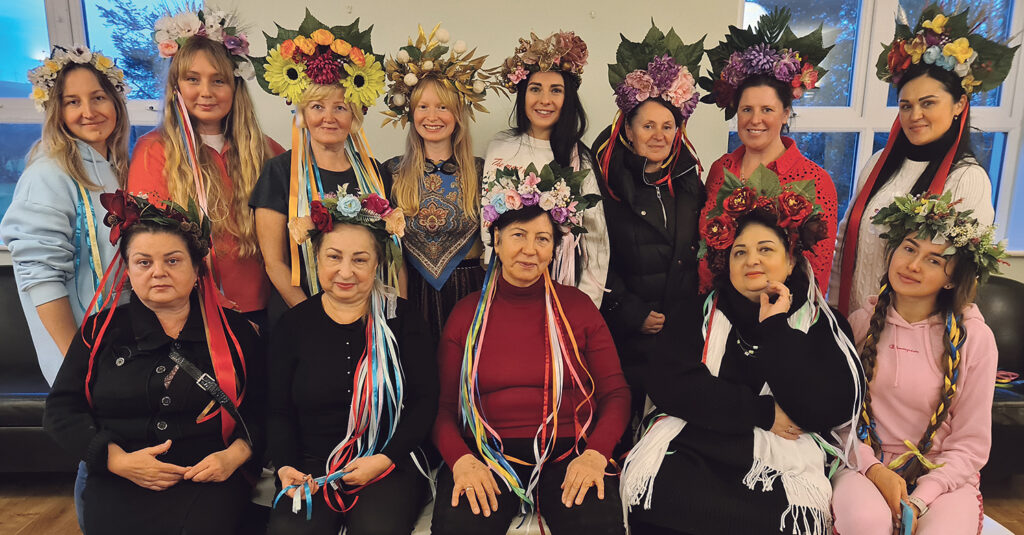