Seven years ago Claire O’Sullivan and Eli Tanner caught each other’s eye on a ferry trip to Whiddy Island. “It was my first trip to Whiddy,” explains Claire. “I was going to a Famine commemmoration mass with my Auntie Mary and Eli was driving the ferry. “Claire was the only person on board who looked up, smiled and said hello to me,” says Eli.

Since that first encounter, Claire and Eli have become partners in life and business. Wild Atlantic Seaweed Ireland (WASI) is the successful marriage of land and sea. Claire and Eli ethically hand harvest wild seaweed in Bantry Bay adding ingredients like sesame and ginger, garlic and lemon, or chilli and lemongrass to create their delicious and nutritious seaweed pestos.

Claire was raised on a small family farm in Bantry. An animal lover, she became a vegetarian at the age of 12 after inadvertently visiting a local abbatoir. As well as running the business with Eli, big-hearted Claire keeps what she refers to as an old folks home for sheep on some family land in Glengarriff.

Eli could swim pretty much before he could walk! From the age of ten, he and his younger brother would sneak out of home before the morning light to go to work on the fishing boats in Bantry. By twelve he was skipper and has been working on boats and the sea ever since.

A trained massage therapist and qualified architect, Claire is a woman of many talents. However the outdoors is what calls to her. “It was the way we were reared I guess; there’s no feeling as good as the one you get at the end of a hard days work, you know that feeling when you’re really physically exhausted and sore.”

After their first meeting on Whiddy, Eli invited Claire to join him one morning on his regular 6am swim in the sea. Things heated up from there and the early morning swim is now a routine for the couple!

“We took our time at the beginning,” says Claire “I didn’t want to introduce him to my family until I was really sure about him,” she says laughing. “It took my mam a while to warm to him, as he’s not an Irishman by birth, but she adores him now.

“We both love the outdoors,” says Claire. “When we first started going out, Eli brought me on a hike up Carrauntwohill; I think he was subconsciously testing my mettle!” “When we got to the hill,” says Eli “I was more than a bit embarrassed when she took off up it like a mountain goat with me trailing behind!”

In 2017, Claire made the decision to leave her job as an architect with Cork County Council to concentrate solely on their business. Together Eli and Claire make all the WASi products – hand harvesting, mixing, bottling and blending at home in their kitchen in Bantry. The couple now supply health food stores all over Ireland.

“We have so many things going on,” says Claire. “Eli would love to give up the sheep but that’s what keeps me sane. If there’s a lull, I feel the need to fill it straight away.

“We did say we’d try to make more time for each other and do a date night once a month,” she continues. “So Eli arrived home, told me to pack a small bag and get in the car; he then drove us all the way to Dublin where he had dinner and tickets to a concert (Ben Howard at the Olympia) booked. I love Ben Howard so I was thrilled. That was five years ago but it was one of the most romantic things ever.

“But it’s the little things like bringing me a cup of tea in bed in the morning that really count!”

“I am romantic,” says Eli “but with big gaps in between,” he admits laughing. “If I see something during the year that I know she’ll like though, I’ll just get it for her. I don’t believe in waiting for birthdays or Christmas.”

And Claire has her moments too. “One of the first things she did for me was write a poem,” says Eli. “She’s very thoughtful.”

“Sometimes I’ll kayak out to Whiddy (takes an hour each way) when he’s working just because I miss him,” says Claire.

Eli and Claire share a love of travelling and a sense of adventure. On a recent holiday to Crete, when their accommodation didn’t work out, they didn’t bat an eyelid; both were happy to sleep in a cave on the beach.

“I think what makes us work so well is that we accept that neither of us are perfect,” admits Claire “we have plenty of failings and weaknesses but we overcome them as a team and take turns in pushing and motivating each other along the way.”

“We also give each other space,” says Eli. Claire has recently travelled on her own to volunteer in a refugee camp on Lesbos. ‘I’m very impressed that she’s doing it,” he says.

“Claire is amazing; she loves helping people and is always bringing home stray animals. We listen to each other and always sit down together to work through a problem. I think we complement each other; our strengths and weaknesses,” says Eli.

Like their relationship, Claire and Eli’s pestos are a perfect balance. “The pestos are full of vitamins, minerals and trace elements so it’s like taking a multivitamin,” says Claire “except better, as they’re easier to absorb.”

Love, life and a red door welcome in the village

Mon Feb 4 , 2019
Originally built in 1820 by the Earl of Shannon to accommodate retired sea captains, Travara, a Georgian-style house in Courtmacsherry has been run as a luxury guesthouse since the early 2000s by owners Brendan Murphy and Richard May. Also partners in life, Brendan and Richard have been together for almost […] 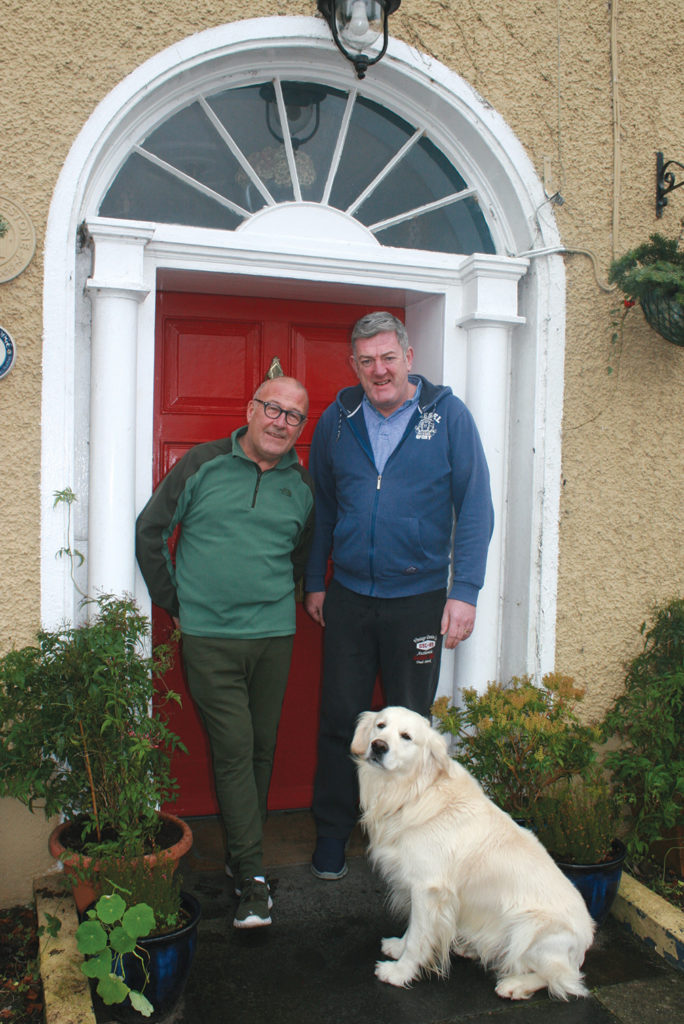