Dr. Owen O’Flynn is a 23-year-old trainee doctor from Bantry who spent time at the ICU in Cork University Hospital as a critically ill patient with Covid-19. Dr O’Flynn, will share his experience at the Covid-19 National COVID Research and Scientific Meeting on September 5, which will be attended by medical professionals working in intensive care throughout the country, who will discuss the management of critically ill patients with Covid-19.

Owen, who is currently working in University Hospital Kerry as a first year SHO on the GP South West training scheme, speaks to West Cork People ahead of the event about his illness and treatment

From a farming background, Owen is the middle child in a family of seven children. After training in undergraduate medicine for five years in University College Cork, he graduated in May 2019. During his time there, he experienced many of the Irish hospitals including University Hospital Waterford, South Tipp General Hospital, SIVUH, Mercy University Hospital and CUH. He was also lucky enough to be given the opportunity to travel to Zambia and work in Mission Hospital Lubwe with Surgeon Noonan Society who helps provide medical equipment to many countries in Africa. During his intern year after graduating, he spent nine months working in CUH and three months working in Bantry General Hospital.

An all-rounder when it comes to sports, there aren’t many that Owen hasn’t thrown his hand to, most notably football and hurling with Bantry Blues, as well as playing rugby with UCC J2 Bulldogs. His most recent interest is hiking, having climbed Carrauntoohil this time last year and Kilimanjaro three years ago.

The very fit and active doctor doesn’t know how he contracted the virus and explains how a post viral syndrome resulted in his hospitalisation.

“During what we think was the actual viral infection back in late March my only symptom was anosmia,” he explains “meaning I couldn’t taste or smell anything for about eight to nine days. My first symptoms before admission were stomach pain, sore joints and muscles, vomiting and nausea, diarrhoea, extreme fevers and chills and a diffuse rash.” It was at this point that Owen was admitted for management of his symptoms and then after two days, admitted to ICU. “During my admission I was swabbed for Covid three times and each time it was not detected,” he says. “I was however antibody positive, which gave us the leading diagnosis, as it takes approx four to six weeks post infection to develop antibodies.

“We are unsure but the most likely thing that happened is a Kawasaki-related disease (also known as PIMS) process that resulted in my lungs going into acute respiratory distress (ARDS), as well as an acute cardiomyositis, which resulted in my heart function becoming a third of what it should be in the space of a few hours.”

Owen’s treatment consisted mostly of supportive management and excellent nursing care. Medication-wise, he was given antibiotics, as is the case with any hospitalised Covid patient to cover for superimposed infection. He was also started on cardioprotective medication, which he is still taking. “I was also on a high dose of anti-coagulation, to reduce my risk of getting a clot in my lungs or a stroke, both of which have an increased risk in Covid infection,” says Owen. “Most importantly, I was on high flow humidified oxygen up to 60 litres/min at 60 per cent, and I received inotropic support in order to keep my blood pressure stable, as a result of my poor heart function. I would like to thank all involved in my care both while I was in and out of the hospital, as I did feel very included in my care and every decision that was made.”

Owen says that he felt frightened every day while in ICU and he feels fear every day since. “The scariest parts were first going into ICU on Tuesday because my deterioration was so quick and on Thursday and Friday when I really felt the effects of my heart failing,” he explains. “The things that kept me somewhat sane while I was lying face down were the messages of support from family and friends across the world, as well as the doctors looking after me, as they were all very concerned for my wellbeing. I remember trying to stay strong while phoning home every evening, sometimes struggling to complete a sentence with the shortness of breath.”

Physically Owen’s recovery took about eight weeks from admission to returning to work. He is aware that eight weeks is not a long time to be out sick given the fact that he was admitted to ICU, however he feels that his recovery was very well managed. “Physiotherapists phoned me everyday to give me advice and answer any concerns I might have had. I am still on medication for my heart and will be for the foreseeable future. I don’t know if I’ve mentally recovered from it yet as I was very sick at the time. I know that on any given day in the ICU I could have died and it is very tough to live with that knowledge.”

His fear now lies in the long-term effects the virus may have on his health. “We don’t know what the future holds. We have very limited follow-up data on antibody response, we know very little about these post viral syndromes and we don’t know how long outside of primary infection they can happen,” he says. “Personally my biggest fear is a long-lasting cardiomyopathy that result in heart failure. My scans show us that my risk of that is the same as if I never got the infection but we have a knowledge base for this virus that is infantile in the grand scheme of things and we don’t know what’s around the corner.”

He says he couldn’t be prouder of the people of Ireland for gritting their teeth and doing all they needed to flatten the curve in the first instance. “I know that the government has had to make some very difficult choices in the past seven months and I’m sure there will be even tougher ones to be made in the coming months.”

Owen would like to encourage people to continue to social distance and keep their contacts down to as minimum as possible. “I would also like to thank both the local people of West Cork and nationwide who prayed for me and had mass said for me during my illness.”

Hosted by The Intensive Care Society of Ireland, the Joint Faculty of Intensive Care Medicine of Ireland and the College of Anaesthesiologists of Ireland, the Covid-19 National COVID Research and Scientific Meeting on September 5 will focus on the experience and learnings of Irish Intensivists (ICU doctors) and Anaesthesiologists during the ongoing Covid-19 pandemic. They will explore what happened, the learnings, the best treatments options from an Irish and global perspective, and ethical issues surrounding the management of this new and challenging disease.

The online event is free for the public to attend. However, as numbers are limited online registration closed on Wednesday evening. To check if there is still availability, you can email Rebeca Williams at rwilliams@coa.ie.

The meeting takes place the day after the ICU 4 U Charity Cycle, which will see ICU doctors, nurses and staff cycle from all over Ireland to Dublin to raise €100,000 for people particularly affected by the Covid-19 crisis. The cycle is in aid of four charities – Breakthrough Cancer Research (cancer patients), Aware (mental health), ALONE (older people), and ICUsteps (ICU patients). The concept came about because ICU staff are uncomfortable at being called frontline and heroes.  They want to put the focus back on those most in need.  For more see www.icu4u.ie.

Mon Sep 7 , 2020
Severe flooding wrecked havoc across many towns and villages in West Cork in recent weeks. Bantry, Skibbereen, Bandon and Rosscarbery were all badly hit with flooding also taking place at Dunmanway, Connonagh, Clonakilty, Drimoleague, Leap and Ballydehob. John Bohane hears from business owners and local representatives about the damage and […] 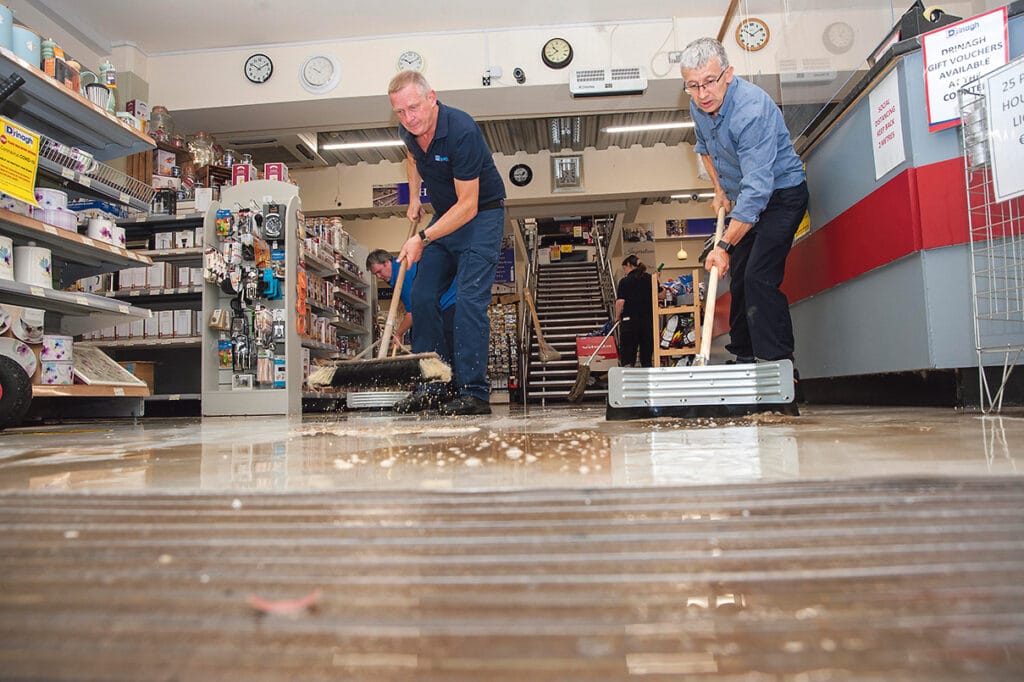