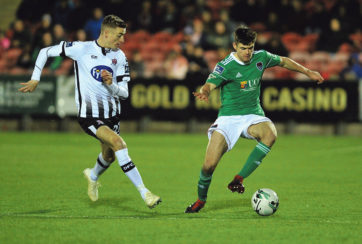 The Schull teenager, who played with all the various Cork City underage teams, first broke into the first team at the end of the 2018 season. Ronan stepped up and impressed on a consistent basis last season. He is delighted with the new contract. “I’m buzzing. I can’t wait to be back training again, playing games and helping the team as much as I can. There is no better place to play in than Turner’s Cross, so I’m buzzing to be back playing there again,” declared the left back.

Pre-season training for the Cork City senior squad resumed on January 2. Ronan loved getting back and working with his teammates again. “We had a few running sessions during December, so we were at the right fitness coming into the start of pre-season training. It is important to get a break at the end of the season to recharge your batteries, so you’re ready to go again. I had been going to the gym and doing a few running sessions to stay on top of my fitness during the off-season. It is important to hit the ground running when pre-season training resumes.”

The talented West Cork soccer player is hoping to enjoy a successful league campaign with Cork City this season. Cork City begins their league campaign with a home game against Shelbourne on February, Friday 14. Ronan, who enjoyed a great debut campaign last season, is determined to push on and enjoy another successful campaign. “I can’t wait for the season to start. Hopefully I can push on now this year. Last season was my first full year playing professionally, so now I feel I can step up and show what I can do. I want to play as many games as I can and improve my game, focusing on my strengths and improving my weaknesses. My main aim is to win as many games as possible and contribute to the team as much as I can.”

The soccer ace was thrilled with the success of his debut season operating as a professional. The defender cemented the left back role and he earned rave reviews for his consistent performances. “I was happy enough with how it went. Obviously the start of the season was tough for me, as the competition at left back was very high with Shane Griffin and Kevin O’Connor there, so I was struggling with game time. Around July then I got an opportunity in the team and I thought I took my chance. It was an unreal experience playing in the Europa League and also to get my first professional goal. I was a bit disappointed with how the season finished as I picked up an ankle injury which kept me out for a few games, but hopefully I can push on now again this year.”

The Cork City senior team ultimately endured a disappointing league and cup campaign last season. Ronan is confident their young players will benefit from the experience they gained last year. “It was a very disappointing season. Obviously at the start of the year we were hoping to be challenging for both the league and the cup, but unfortunately that didn’t happen. We knew it wasn’t good enough. It wasn’t where Cork City should be in the table, so hopefully this year we can get things right and get up that table. Our aim is to get Turner’s Cross buzzing again. The most disappointing aspect was the Europa League game. We were the better team away and ended up winning the game, but lost on aggregate, as we lost the home game. Lots of young players made the step up to the first team, which is great. Colin Healy is the Head of the Academy. He knows exactly what its like to play for Cork City and what’s expected of the players. Hopefully more players will make the step up this season.”

Cork City appointed Neale Fenn as their new manager in the final few weeks of last season. Ronan is confident they have made a great appointment. “It is a very good appointment. He has played for Cork City before, so he knows the club inside out. He is a modern manager, who likes to play ball on the deck which I think suits my game. He came in late enough last season, so he couldn’t change the whole system to what he wants. I think we’ll see most of his changes this season. We’ve a young team this season with quality players. I’m confident we’ll get up that table again.”

Ronan was given his debut by the previous long-serving manager John Caulfield. Ronan will always be indebted to his former manager. “Ever since I joined Cork City for my underage career, he was the manager. He believed in me and gave me my first contract, so I’ll always be grateful. He is a great manager and he showed it with the success in the league and cup with Cork City.”

The star soccer player is balancing his soccer commitments with college life. Ronan is currently studying Commerce in UCC. He is thriving in both his sporting and academic careers at present. “I might miss a few lectures because of training, but most of the lecture notes are put up online so you won’t miss out. Winter exams were held during the off-season, which gave me time to cram in my study. They are both going well at present.”

Tue Feb 11 , 2020
OpenOut is a new West Cork based business that is providing an innovative solution to a common problem in our region – poor mobile coverage and broadband connectivity. One of the founding partners is well-respected businessman Peter Walsh. Peter speaks to West Cork People about the service OpenOut provides.  “We […]