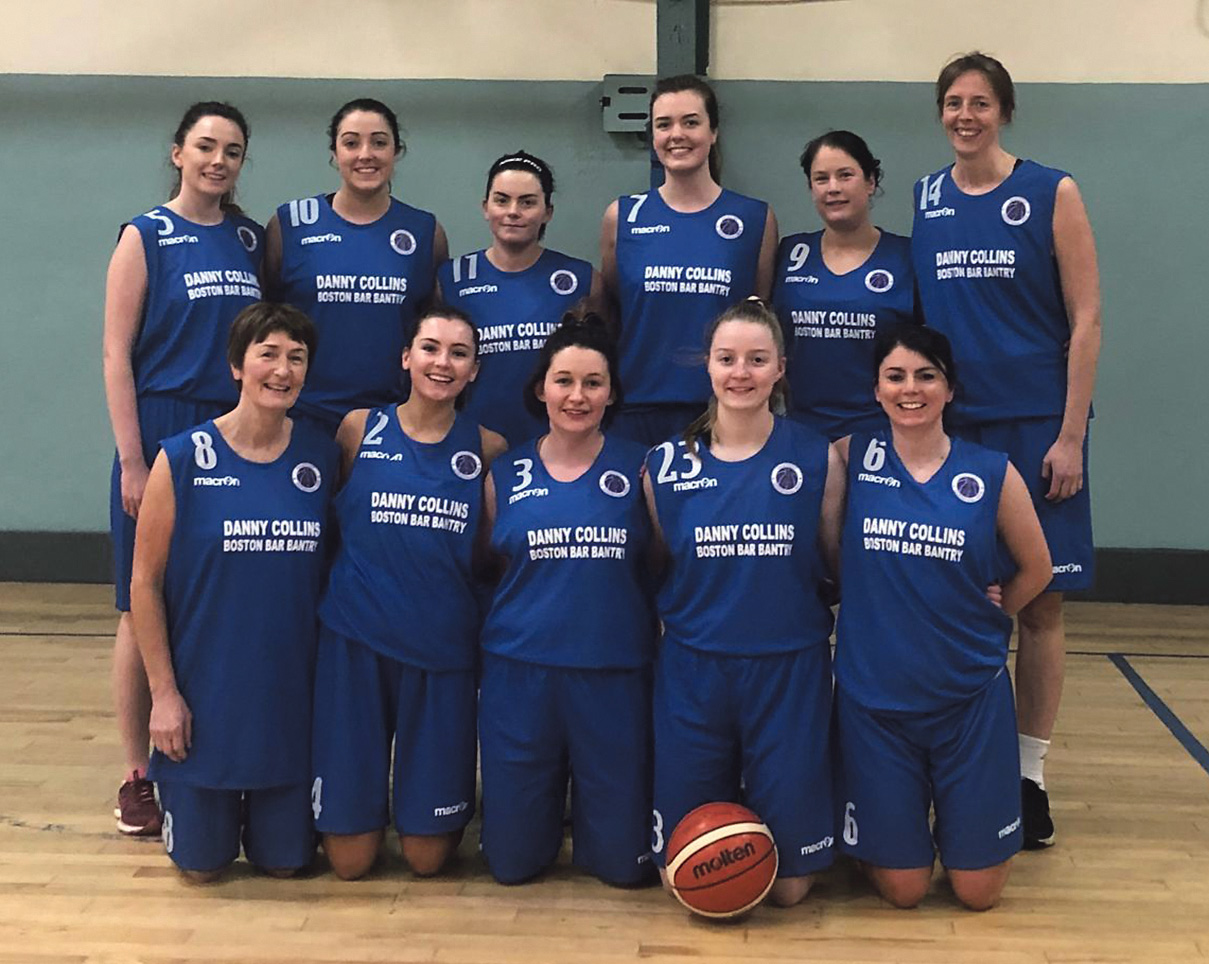 Bantry ladies basketball club fielded an adult ladies basketball team this year in the Cork Basketball League following an absence of twenty years. They have subsequently enjoyed a great season, as they recently secured their place in the championship final. The ladies team are also on the cusp of securing their place in the top four of the league, which maintains their hopes of automatic promotion. John Bohane reports on the great success they have enjoyed this season.

The Bantry adult ladies basketball team entered into Division One of the ladies league this year with a mixture of enthusiasm and nerves following their lengthy exile. They have enjoyed a great journey so far. Their league form has been scintillating, with the club still maintaining hopes of securing promotion. They have embarked on a great odyssey, which will culminate in them taking on Donoughmore in a championship final in Neptune Hall on Saturday, March 7. A huge crowd from West Cork are expected to travel to the city to cheer on their local heroes and heroines. One of their key players is Niamh O’Neill, who is eagerly looking forward to the occasion. “It will be a great experience. We are all looking forward to the final. There will be a few nerves, but hopefully we will enjoy the occasion. We have trained hard and we are ready for the big game. It is a huge achievement for the club to get this far. There will be a big crowd and great atmosphere in Neptune Hall.”

There has always been a very strong tradition of basketball in Bantry. In recent years, the Bantry adult men’s team have enjoyed great success, while the local secondary school team Colaiste Pobail Bheanntrai have reached All-Ireland finals in successive years. The adult ladies team however, for a variety of reasons, didn’t re-enter competitive basketball until the start of last season. They initially reformed seven years ago, as a social club, but such was the demand from the players for a return to competitive action, they were determined to return to league action this year.

Niamh O’Neill, who also acts as the coach with the adult ladies team, originally came up with the ideal of re-establishing an adult team for the ladies club. Niamh was delighted with the positive reaction to her idea. “It’s been twenty years since Bantry had a competitive ladies team. My mother and sister both played on that team. Seven years ago I set up a social basketball group for ladies in Bantry. As time went by we ended up getting many old club members back. Last year, we decided to take the plunge and enter into the Cork Ladies Division One league,” revealed the basketball ace.

The weekly social meetings sparked a renewed hunger amongst the players to get back into competition action and attract new players so they could return to league action in the Cork Basketball League. Niamh was thrilled with the re-establishment of the adult ladies team. “When I moved back to Bantry, I wanted to get back into playing basketball. We would meet up every Thursday evening for a run around. We often spoke about entering the Cork league, but it never seemed to take off as many of the social players at the time had young families. It is a big commitment to re-enter the league, as there is a lot of mid-week travelling. Last year our social numbers were incredible with a great mix of players ranging from secondary school students, college students, local football players and the original group who have been playing basketball down through the years. The demand and interest from the players was there and the mix seemed right so we decided to go for it.”

The Bantry adult ladies team features a nice blend of young and hungry players, coupled with a number of established and experienced players determined to enjoy more success with their local basketball team. Twenty-six players registered for the team for this season’s league campaign, a great indication of the desire amongst the players to play competitively. Niamh, who recently returned to competitive action, is very pleased with their dedication and attitude. “We have a great mix of players on the team. There was a big turnout to the registration night. Six of our players coach at underage level and two play with a Cork Masters team. We had one player who played for Limerick Celtic. The younger girls are fantastic. Their fitness levels are exceptional and they just want to play the game. They want to be on the court. They really are a great bunch of women. The team spirit, enthusiasm and support for each other is fantastic.”

To set up a team in a competitive league requires a lot of planning behind the scenes with regards sponsorship and registering players. A lot of hard work from various people goes on behind the scenes, which has ensured they have enjoyed a successful season. Niamh is grateful to all who have helped make their dreams come through. “We were starting from scratch as a team and many players had to transfer back from other clubs. We were delighted to bring them back. Danny Collins from the Boston Bar did not hesitate when we approached him to sponsor our team. His generosity set us up with regards getting gear and basketballs. Our goal for the season was to be competitive. Our main aim was to try and make the top four play-offs. We have only lost one league game all season. If we win two of our remaining league games, we will also be promoted which would be great. Our success this season has totally surpassed our expectations.”

Bantry Basketball Club at both adult and underage levels is thriving at present. Their adult men’s team captured a unique treble last season. They won the league, championship and top four trophy. Their underage teams boast very strong numbers, which augurs well for the club going forward revealed Niamh. “Basketball in Bantry is flourishing at the moment. We have excellent coaches who give so much time to their teams. We have underage boys and girls on Cork Academy teams and many are in the process of attending trials for Cork development squads. Every underage team in the club is full. We have two adult men’s teams who also have great numbers. The younger members really enjoy seeing their parents and coaches playing. They really get behind the teams. The basketball committee put in great work behind the scenes and their work often goes unrecognised. The future is very bright for the club.”

RAWR : a decade of commitment to animal welfare

Mon Mar 9 , 2020
2020 marks the 10th anniversary of the foundation of Rural Animal Welfare Resources – RAWR for short. The idea was conceived in 2010 by a group of like-minded people, who had all volunteered in animal welfare and animal rescue. They saw the overpopulation of feral cats in the towns, villages […] 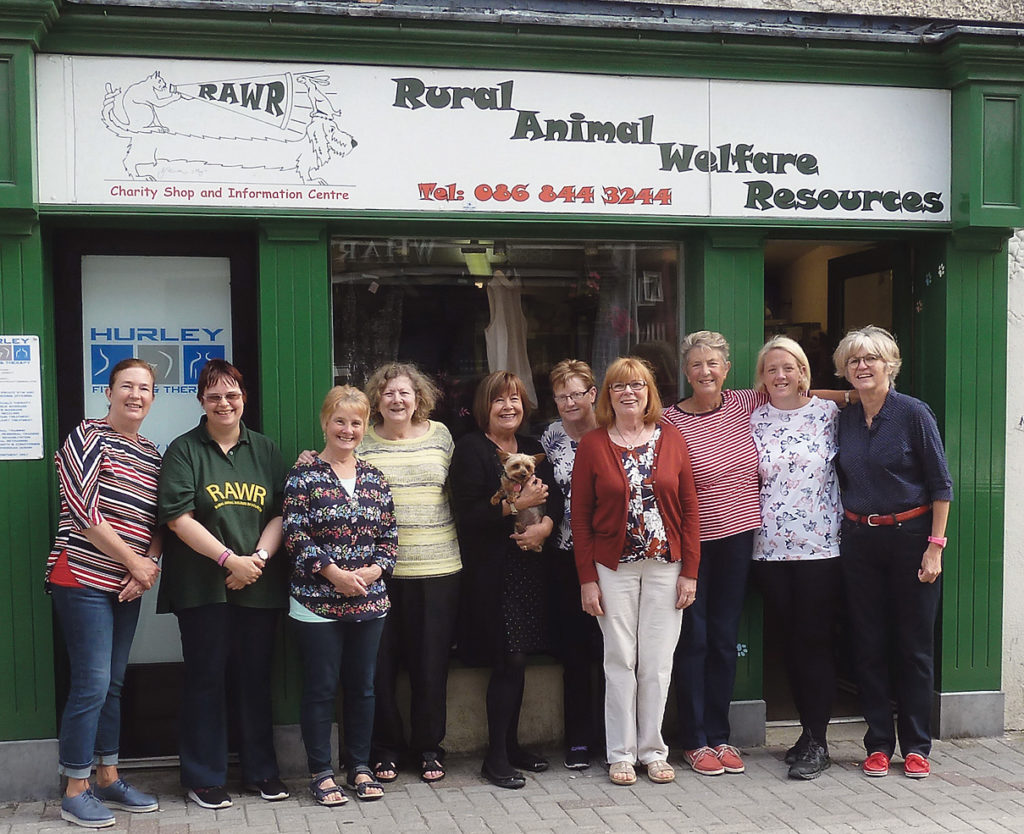