The sunshine is warm on his shoulders as he walks, in rhythm with the steady gait, of the beautiful, imposing, golden retriever beside him. He can walk smartly, this is the incredible gift his dog has given to him, no white cane getting stuck in gratings, under wheelie bins, or in the street furniture littering his path; the obstacle course his dog can negotiate, but a long cane user trips over, bumps into and injures themselves. His enjoyment of the aroma of blossoms wafting from a garden is unceremoniously halted by a leafy, twiggy, spiky smack to the side of his face; a hedge left too long without trimming.

He is meeting a friend in town. His dog knows the route. It is altering each day with outdoor dining, but his dog somehow manages. He needs to cross the road, the kerb is blocked…“Find the way” he encourages his dog. A hand grabs his arm, startling him, grabbing him, almost dragging him, in a well-intentioned silent effort to assist. The concern, of the voiceless hand, is appreciated; however, the type of assistance is misplaced. “I cannot see but I speak, ask me. I would love to explain, what I need, if I’m in need, the assistance I need.”

He needs to pass through a shared space. Disaster zone. No reference points for his dog. No kerb, just a wide abyss, with people, chatting, laughing, oblivious to what is around them. A sharp edge strikes his head before he has even left the footpath. His hand automatically checks his head, then feels to find what has struck him. Low-flying flower baskets. They were not here ten days ago. Noted. He edges on the route he has learned, to allow him to traverse around the misnamed shared space. It is so intimidating, scary. People are all around him, he is shoved sideways, trying to regain balance, trying not to lose balance, trying not to affect his dog with his loss of balance, they could both be injured. “Hey, you just swung your backpack into that guy” someone shouts.

The park beckons, he can hear children shouting, playing. His friend calls to his dog and pets him as he approaches. He has explained to his friend, so many times, that it is not fair to distract his dog, to cause him conflict, when he is working and in harness. He can pet and chat to him to his hearts content when his harness comes off, then he is an everyday pet dog, like any other.

Their usual spot is vacant. He asks his friend for his arm and takes a gentle hold of the back of his elbow to be guided by him, as they stroll over the grass to a spot, which has some cool shade for his dog to stretch out in, while they eat. He removes his dog’s harness and reminds his friend that petting time has arrived, as he clips an ordinary lead on his dog. His dog snoozes in the shade.

His dog is veering slightly to the left of the tactile paving, as they approach the junction to cross. He is puzzled but trusts his dog’s judgement. His free hand collides with the iron frame of a sandwich board, on the tactile paving. He would have no hope if he had a long cane, he would have just collided, perhaps fallen.

He reflects on how odd it is, how little, sighted people can really see.

He is thankful for the four paws that his two shoes follow; however, it is a constant concern to keep them both safe. It is after all, only courtesy, respect and consideration or lack of it, which can put them at risk.

The weed you won’t want to be without

Tue Jul 6 , 2021
The herb Plantago major (greater plantain) or weed to most people, is a familiar sight in gardens presently. The leaves may be quite large, and it is just ready to harvest. A versatile plant, it has been used as medicine and food since ancient times and has many benefits. It […] 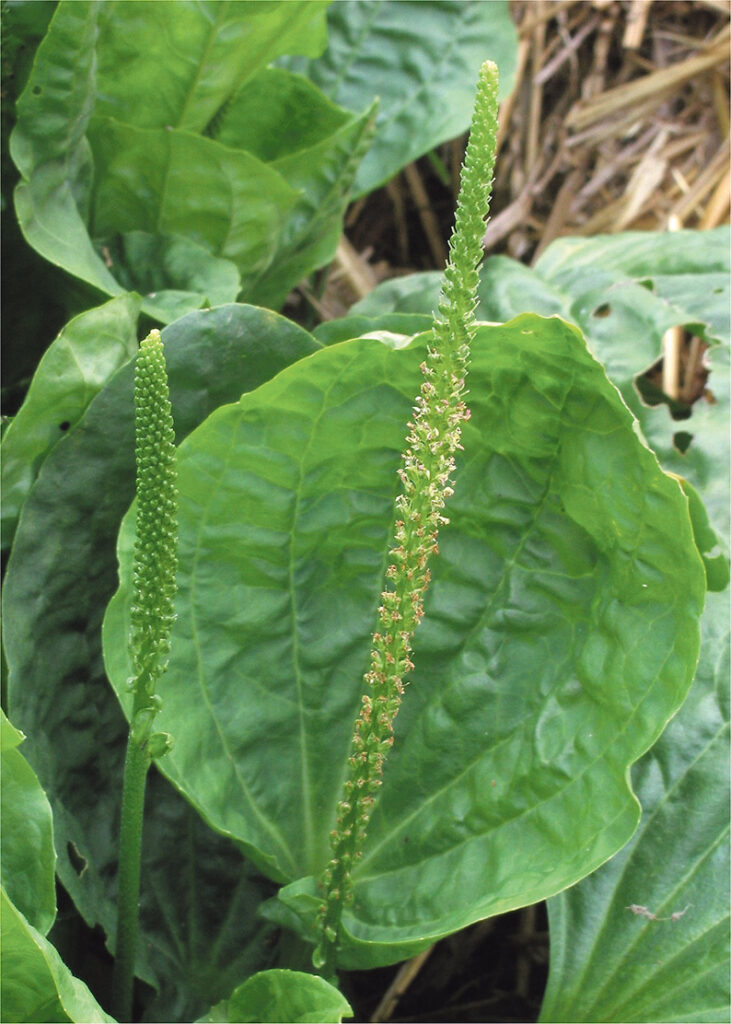