During the lockdown period of restricted travel one widely remarked phenomenon countrywide was the large increase in the numbers of people of all ages out walking and cycling. A desire to retain that peace and freedom, together with the promise by the new coalition government of an annual €360 million spend on walking and cycling infrastructure has led to the formation of a new Rural Cycling Collective. Comprising an array of groups and individuals under the umbrella of the wider national Cyclist.ie advocacy network, the group is focused on making rural communities (towns, villages, and rural roads) cycle-friendly for all ages and abilities. It aims to rebalance the debate on active travel so that everyday journeys by bike across rural Ireland are enabled and supported.

At a recent family fun cycle in Clonakilty, as part of the multi-location launch of the Vision for Cycling in Rural Ireland, over 70 bicycle lovers, young and old, turned out to launch the Vision and celebrate Kinsale-based cycling inspiration six-year-old Harry, who is cycling 3km each day for 33 days to raise much-needed funds for his heroes at local autism support centres. “People clapped us all the way up the main street, it was amazing, such a positive experience,” said Allison Roberts. “So many of the kids on the day said things like ‘I love my bike’ and ‘I want to be able to cycle more’.”

“Safe cycling is good for everyone,” she continues. “For people who live here, people who visit. It’s 2020…it is time to make change.”

Launching the manifesto with events in Clonakilty, Skibbereen and Bandon, and speaking on behalf of the Clonakilty Bicycle Festival, Allison said “Today, we launch our vision document which aims to promote and celebrate everyday cycling in, towns, villages and their surrounding areas. We are launching the Rural Cycling Collective to highlight the needs of areas outside of major cities. We are campaigning for fair distribution of transport funding to regional parts of the country to make cycling for all ages and abilities a reality.  Our eight identified priorities have the potential to completely transform communities.”

The collective is calling on Local and National Government to –

1. Create an environment in our towns, villages, and rural roads where cyclists are expected and respected

3. Implement best practice design so that routes are safe and comfortable for all ages and abilities

5. Lower Speed Limits to make our roads and streets safer and more accessible for everyone, and to reduce casualties.

6. Ensure clear and timely access to funding by improving capacity at all stages of local and national government

7. Collaborate with all stakeholders including cycling and community groups at all stages of planning and design

Taken together these measures would transform active travel throughout Ireland. The co-benefits would include improvements to health, safety, congestion, air-quality, noise levels, and the public realm.  More cycling will also help us to meet our climate change obligations. Katie Mann from Cycle Sense added “We can be a voice for areas of Ireland that have not realised the potential of cycling for everyday activities, cycling to school for children and students, to work, to the post office for your pension or even to buy a litre of milk. We need to change how we develop our towns, villages and rural roads and we need our collective voice to be heard.”

There is overwhelming evidence that lower speed limits make streets safer for cyclists and pedestrians and make them more pleasant places for children and adults to live, socialise, work and play. The Love 30 Campaign is a new group campaigning for lower speed limits in urban areas.

“Speed limits are being dropped all over Dublin City as a result of this campaign,” said Allison. “It’s a no-brainer. One of the easiest ways to make our roads safe for cyclists would be to drop the speed limit.

“There’s a really good Dutch approach called Sustainable Safety. They have three ways of classifying roads; high speed, residential and connecting roads and there are very simple, straightforward guidelines for using those roads. Because it’s rural Ireland, we’re unlikely to get separate bike paths soon, but we can choose roads that can very easily be converted into safe cycling routes by doing things like lowering speed limits and introducing signage in urban and rural areas.”

For more information on what’s happening in Clonakilty this summer visit The Bike Circus or facebook.com/clonbikefest.

In Skibbereen, head to The Bridge every Thursday for the next four weeks (started July 30) at 2:30pm, to meet Cycle Sense who are hosting cycles to Loch Eine or Tragumna alternatively. Under-12s must be accompanied by adults and a cargo bike will be on hand to carry your rucksack. Contact Katie 087 758 9716.

In Bandon, each Sunday at 11am, there is a family cycle along the Quay Road, meeting outside the Old Still Pub Bandon mart hosted by Bike Friendly Bandon, contact Lucy 087 970 1674.

This summer, the West Cork Development Partnership in conjunction with Cycle Sense is running Bike Doctor Clinics in Dunmanway, Clonakilty, Skibbereen, Bandon and Bantry – find out when they will be near you on their website.

The Rural Collective are calling on everyone – cyclists, non-cyclists, want-to-be cyclists, mums, dads, planners, councillors… – to get involved in shaping this vision and helping to make it a reality. Get in touch with your local group for information on upcoming, training and the use of cargo bikes.

To find out more, add your support, share your feedback go to cyclist.ie/ruralvision/

Tue Aug 11 , 2020
Two years ago Conor and Bernadette Hegarty took the first steps in a new adventure together. Newly-married, the couple decided to combine their honeymoon with a research trip for their business idea – their dream was to create a purpose-built glamping site overlooking the Atlantic at their home in Ardfield […] 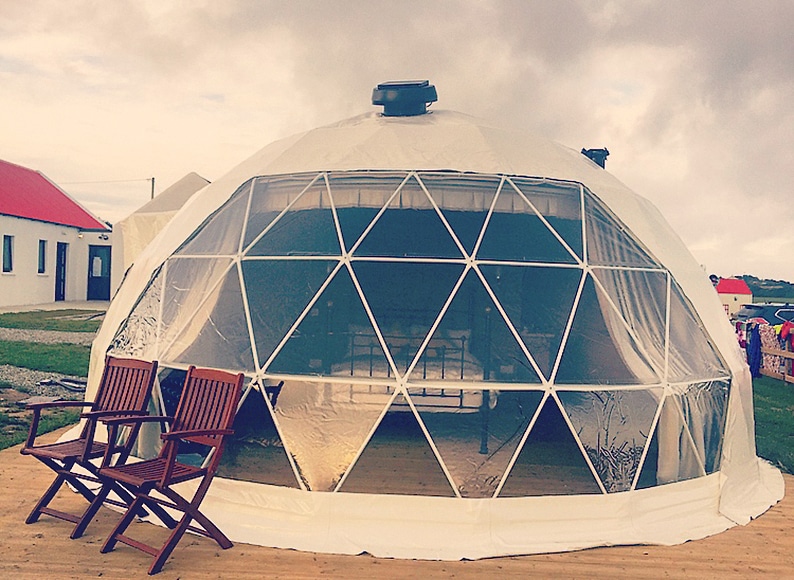