Niamh Whitty purchased her home in Clonakilty a little over a year ago. Able to see the potential in the four-bedroom 1930s farmhouse that was still firmly stuck in the past, the property photographer from Longford, who has lived in West Cork for a number of years, had the creativity and knowhow needed to bring a project like this to fruition. In Niamh’s vision, walls would be knocked, carpets pulled up and wallpaper taken down. By the end of the renovation, the traditional farmhouse, converted to a three-bedroom, would exude warmth and tranquillity. Light now dances on walls that before were cloaked in shadow.

Niamh started the renovation project in September 2019 – immediately after purchasing through local auctioneer Hodnett Forde – hoping to be finished in time for Christmas. “My expectations were just a bit unrealistic,” she says. “These kind of projects always take longer than you think. And then of course we had lockdown too to contend with.”

Niamh employed Clonakilty-based builder Frank Burke to do the renovation. “He got me straight away, “ she says “Frank said he’d make it cosy for me, which is exactly what I wanted. I couldn’t fault him, he was very flexible, and although we did go over budget, this was mostly due to a few unexpected surprises along the way.” Fortunately for Niamh, when her bank was unable to grant a loan due to her being self-employed, Clonakilty Credit Union offered the extra finance she needed to finish her forever home.

The entire house was insulated, plastered, replumbed and rewired.

One of the main issues Niamh had with the farmhouse was the stairs opening into the living area. This opening was closed off and the stairs redirected into the hallway. “It almost put me off buying the house but I’m really glad it didn’t,” she says. “Anything is possible once you set your mind to it.”

The house had been reroofed a few years ago, which was a big selling point.

The existing farmhouse kitchen consisted of just a few presses and a sink. Niamh decided to knock the wall between the kitchen and living area, which really opened up the space. She also put in double glass doors from the kitchen into the courtyard area so that natural light could flood the space. When the ceiling came down during the renovations, Niamh decided to use it to her advantage and raised the ceiling height in the new kitchen area. “It changed everything,” she says.

The room off the new living space became a smart office with the stained glass originally over the front door repurposed as an interior window. It’s these little nods to the past that give the house its charming character and prove that old can very successfully marry with new. Niamh had the original kitchen door rebuilt around a piece of glass reclaimed from a church and it now separates the kitchen from the hallway. “The glass was free but rebuilding the door cost me a small fortune,” she says. “It was worth it for the kaleidoscope of light the glass throws out.”

The double doors from the kitchen open out onto a courtyard area with a collection of old stone sheds that used to house a smokery and now ooze potential. “A future project,” says Niamh pragmatically. “When funds have built up again. The first thing I need to do is knock the one that has a tree growing out through its roof!”

The floor is uniform throughout the house, covered in grey laminate, and Niamh has painted all of the walls white with pops of colour in carefully chosen places.

The hallway, which used to be four different levels, is now completely wheelchair accessible. Off the hallway, behind a sliding door is a good size bathroom where a tub is revealed; at the end of the hallway is the sunlit master bedroom with walk-in wardrobe and views of the garden – the only sound is the birds.

Upstairs, the two bedrooms are just as bright and inviting. The beautiful white woodwork on the ceilings is the result of hours of caulking and painting by Niamh. Currently the bedrooms are being used as storage but once she finds some nice bookcases, the boxes will empty.

The privacy enjoyed by the garden was very appealing when Niamh first viewed the property. “I’m really looking forward to getting stuck into the overgrown beds,” shares the keen gardener. She has already introduced some of her own favourites; the cosmos and gypsophila planted over the summer are still flowering happily.

Niamh finally moved in once Covid restrictions relaxed a little; and while the major parts of the renovation were complete, there was only one working socket, no floor coverings in most rooms, bare plaster on most walls and a house that was still drying out. She didn’t mind at all, she was so happy to be in!

Today there is still lots of cosmetic work to be done and a few bits and pieces of furniture to be sourced, like a sofa bed and a bookcase. At time of writing, she had just purchased a new coffee table from Sheehy’s of Clonakilty and Bandon.

Niamh’s advice on furnishings is to wait before purchasing until you find something you really love and then save up if you have to, in order to acquire it. She also says don’t be afraid to fight for what you want; talk to your tradespeople.

When she’s not working on her own home, Niamh is busy taking photographs of other houses. Niamh’s photography business is Picture It Sold and she works with estate agents and private clients to bring out the best in each property.
www.pictureitsold.ie.

All photos by Niamh Whitty.

Mon Oct 5 , 2020
Already boasting a 12,000 sq ft showroom, the completion of a new, expanded storeroom last year couldn’t have come at a better time for Glentree Furniture & Carpets in Dunmanway. This extra space enabled husband and wife team, Paul di Rollo and Evelyn Keane, to order in much bigger volume […] 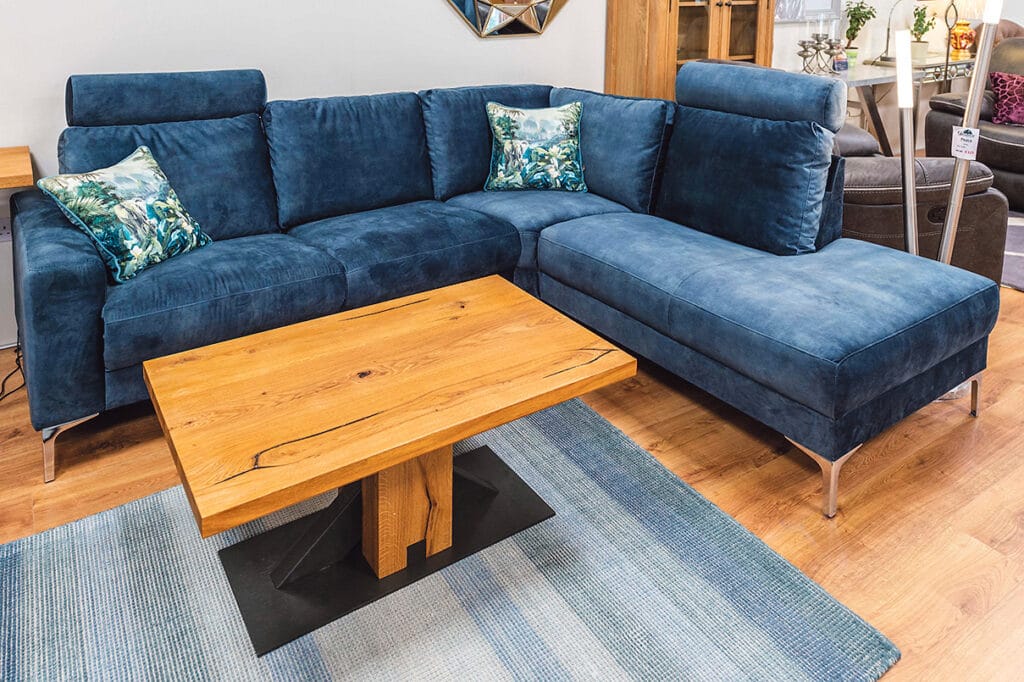