Dr. Brenda Moran is a recognised BMS (British Menopause Society) accredited menopause specialist, with an interest in conditions associated with hormone sensitivity such as premenstrual disorders. The founder of the Danu Menopause and PMS Clinic in Cork, her aspiration is for all women to be able to avail of good quality sexual and reproductive healthcare throughout their life transitions. She chats to Mary O’Brien about recognising the symptoms of perimenopause, deciding if Hormone Replacement Therapy (HRT) is the right treatment for you and why it’s imperative that specialist menopause care for women is funded in general practice.

For the majority of women perimenopause will begin in their mid-40s (45-50) but according to Dr Moran this transition can start much earlier or even later for some women.

“During this time, PMS can start for the first time or it can worsen,” says Dr Moran. “This is a characteristic trait of perimenopause, as are headaches, migraines or worsening of such physical symptoms, palpitations, brain fog, lack of focus or difficulty concentrating.

“Some women who are experiencing declining hormones can have menopausal symptoms such as hot flushes, night sweats and sleep issues.”

Anxiety triggered by fluctuating hormones is very common in perimenopause. “Anxiety and loss of confidence are the most common symptoms presenting to me,” shares Dr Moran.

Then there is vaginal dryness, vaginal burning, overactive bladder, recurrent UTIs  and a whole array of vagina-related issues due to declining oestrogen, or as Dr Moran explains what is referred to as Genitourinary Syndrome of Menopause (GSM) – prevalent in menopause and post but it can also start in peri.

These are just some of the more common symptoms. Non-classic symptoms can include burning tongue. “That’s a big one,” says Dr Moran “and as a GP one that I didn’t make the association with perimenopause for a long time.” It’s a long list but burning mouth and tinnitus are two others at the top.

With the conversation around women’s health focused so much on menopause at the moment, Dr Moran stresses the importance of recognising that other things can present with these symptoms as well. “It’s important that other things are ruled out first and it’s our job as doctors to put the clues together.”

Post-menopause is a “retrospective diagnosis – only diagnosed after periods have stopped for at least a year and they are not on a form of hormone therapy”. The majority of women will be postmenopausal by the age of 55. There is no reliable marker to decipher the ‘exact moment’ a woman has gone through their menopause, therefore it’s diagnosed in retrospect as periods need to be stopped for a year.

Not everyone will get symptoms of menopause. “It’s an area we still don’t know everything about, why some women experience symptoms when their oestrogen is a certain level and others don’t.”

Low progesterone can occur before the decline of oestrogen for some people and how that often manifests is in the change to your menstrual cycle, for example heavy periods or flooding. “Some people get on well with progesterone and some don’t,” explains Dr Moran. “A lack for some might be associated with anxiety and poor sleep but for others it won’t have any impact.”

High oestrogen can be seen quite often in perimenopause. “That’s the ovaries working really hard to try and release the egg,” she explains. “It’s like an engine beginning to tire. At times there can be a high production of oestrogen and this can cause irritability, mood swings, or nausea, stomach or gastrointestinal issues.

“There is no right or wrong script to this…it’s very individual but obviously if you’re post-menopausal, it’s a case of giving you back your hormones to relieve or resolve your symptoms.

“I find perimenopause more difficult to treat from a HRT perspective, as most people will still have ongoing hormone production themselves. It’s a case of giving a little back to try to balance things.”

Hormone Replacement Therapy (HRT) is used to replace hormones that your body no longer produces in menopause in order to relieve symptoms. The two main hormones used in HRT are oestrogen and progestogen but there are many different types of these hormones available in HRT.

“For some people the narrative is that HRT is a panacea but it’s not as simple as that,” stresses Dr Moran. “It can be tricky. People can have very different responses to HRT and you can get complications on it as well.”

While a supporter of HRT, Dr Moran puts a lot of value on optimising lifestyle, which she says can have the knock-on effect of improving a response to HRT. Exercise, a good mediterranean diet and reducing sugar intake are incredibly important. “Fluctuating blood glucose levels will exacerbate any hormonal swings going on in the background,” she says.

If someone hasn’t had a good response initially to HRT but still feels it is the right treatment for them, Dr Moran’s recommendation is go back to basics.

“I do this with some of my patients: stop it for a period of time, and then reintroduce it and try a different regimen, a much lower dose, increasing it up gradually.”

The two types of HRT treatment plans are cyclical (or sequential) HRT and continuous HRT.

The way in which progestogen is taken along with the oestrogen determines whether or not the HRT will lead to bleeding. By adding progestogen for 10 to 14 days a month, a bleed occurs similar to that of a natural cycle. This form of HRT is called ‘cyclical’ or ‘sequential HRT’ and is advisable in perimenopausal women.

Forms of hormone replacement that give continuous progestogen with the oestrogen have been developed to avoid bleeding altogether. This method is called ‘continuous combined HRT’. “It tends to be given post-menopause,” says Dr Moran.

“HRT can cause bleeding and it’s important that this is recognised as a side effect,” she continues. “You get leeway with that for the first three to six months but after that time, if you still have irregular bleeding, it needs to be investigated to make sure there isn’t another cause.

“If a woman is switched over to a continuous regimen too soon in the perimenopause and they have ongoing hormone production themselves, this may lead to irregular bleeding,” she emphasises.

For a woman in the perimenopause stage, Dr Moran says the Mirena coil combined with oestrogen can often be a good option. “You can still get pregnant in perimenopause and the Mirena offers a contraceptive, it’s very good at controlling bleeding in most women and it gives good womb protection,” she explains.

There can be a number of issues present when someone starts HRT, and Dr Moran has seen progesterone cause problems for some of her patients. “If you’re not getting on with it orally, my first line would be to try inserting it vaginally (Utrogestan), which can work; the Mirena offers a low does of progesterone; or changing the type of progesterone can be an option. Sometimes it can take a year to finally get the right regime,” she says.

Dr Moran believes there is a need for pathways into clinics, ideally public clinics, for people with complications or anyone struggling with menopause symptoms.

With the right support, menopause should not be a debilitating transition for women.

“We need to avoid fear-mongering, particularly in women in their 20s, 30s, 40s, who may not be experiencing any symptoms but are dreading what is ahead,” she says.

While the primary sex hormone in men, testosterone is also produced by women and contributes to sex drive, bone health and muscle strength. While it’s not licensed for women in Ireland, Dr Moran offers reassurance that the safety data for its use in women is good. “In women, we’re replacing testosterone back to pre-menopausal levels, not increasing it and the available data does not show increased breast cancer rates or cardiovascular events, although further studies in this area would be beneficial”

Dr Moran relates that it’s important to test a person’s levels to make sure they not too high before prescribing testosterone. The test involves measuring total testosterone and something called sex hormone binding globulin, which gives an index called the free androgen index.

While Ireland’s first publicly-funded menopause clinic opened this year at the National Maternity Hospital in Dublin, it is only accepting patients from its catchment area with complex needs. Another clinic is due to open in Cork, hopefully in the next year.

“There should be help out there and it should simply be a case of getting that help when you need it,” says Dr Moran.

For anyone interested in doing some research before going to their GP, Dr Moran recommends going to the Women’s Health Concern website, the patient arm of the British Menopause Society (www.womens-health-concern.org); on facebook ‘The Irish Menopause’ group, Dr Caoimhe Hartley (menopausehealth.ie); and Dr Hannah Short has some excellent podcasts on instagram and is due to release a book called ‘The Complete Guide to Premature Ovarian Insufficiency in Early Menopause’.

Not everyone will need or want HRT and Cognitive Behavioural Therapy can be very beneficial for women suffering from symptoms such as anxiety in menopause. Dr Moran recommends looking up Prof. Myra Hunter or go to the www.womens-health-concern.org website for more information.

Tue Jun 7 , 2022
Known for its eclectic style and statement colourful pieces, Violette in Skibbereen has now gone a step further for its customers with an entire room upstairs dedicated to bringing accessorising to a whole new level and perfecting the final touch. Fun, quirky, bold, sombre, strong, sexy… whatever signal you’re hoping […] 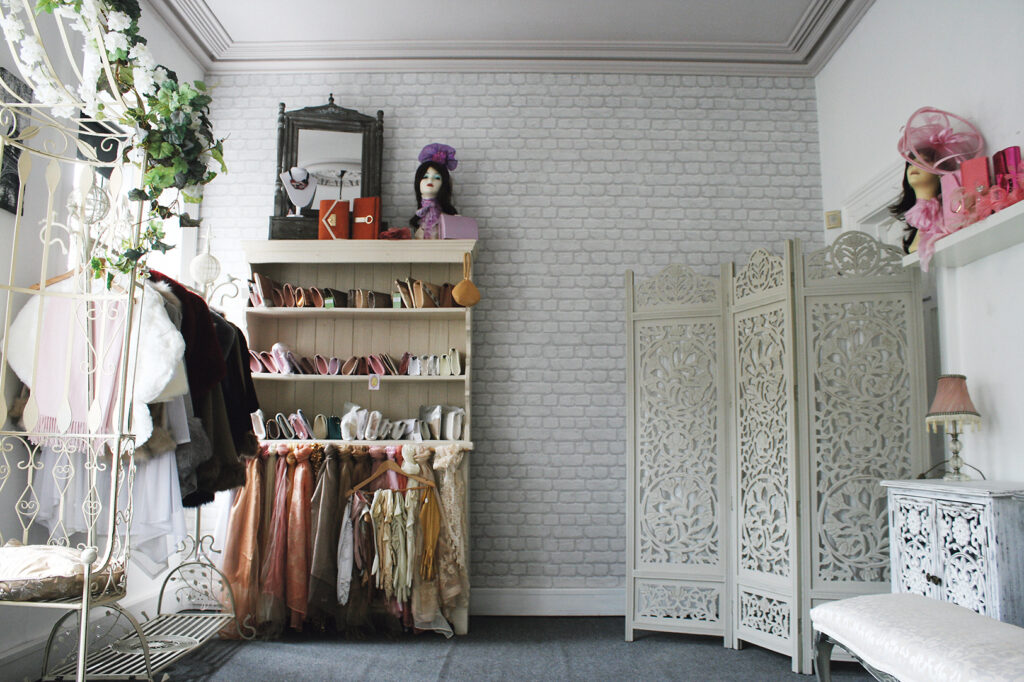