‘Good seafood cooked simply and skillfully’. That’s the ethos behind O’Connor’s Seafood Restaurant Bantry and one that has stood the restaurant in good stead, particularly faced with the challenges thrown out by this pandemic.

Over a year-and-a-half ago, in March 2020, Shane Spillane and his wife Carly opened the doors of their first-time business venture, a restaurant in Bantry. It was a grand opening. Eight days later they closed the doors again. For how long? Nobody knew. “It was devastating,” says Shane. “We put everything we had into it.”

Due to unfortunate timing (the qualifying cut-off date for the government income support scheme was in February and the restaurant opened in March), O’Connor’s didn’t qualify for any supports until November of that year.

A decent landlord and local support for their takeaway menu kept O’Connor’s going until they were allowed to reopen for dining.

“There was certainly no honeymoon period,” says Shane. “On the bright side it gave us a good grounding. We learned very fast!”

However busy the floor is, the customer is always made to feel at home.

“It’s so important that people feel looked after,” says Shane. “it used to be a matter of going the extra mile, now it’s a mile-and-a-half!”

Since the opening, the interior has had a revamp and the business model has been tweaked. Fine dining is a phrase no longer tolerated by Shane or his customers. “People don’t want to spend an arm and a leg on big fancy meals when they’ve been cooking them at home,” he says. “The most expensive thing on our menu is a 10oz steak, which costs €28. Our motto here is to keep it simple and serve really good, flavoursome, affordable food using high quality local ingredients.”

A team of five chefs is headed by the talented Danny Barter, who previously held the position of head chef at Liss And Estate in Skibbereen and The Whale’s Tail in Clonakilty.

Behind the scenes, wife Carly is the driving force. “She’s the backbone to the business,” admits Shane.

Last December, the couple’s four-year-old son was diagnosed with Autism. “We have an understanding so it made sense to add a sensory wall to the back of the restaurant,” he says, “making it a quiet area with social stories so that the kids know what to expect in a restaurant.” All of the staff have received training in supporting people with Autism.

O’Connor’s is open seven days a week, from 9am until 9pm every day. The breakfast-brunch run starts at 9am and continues until 4pm every day. “Bantry is a breakfast town really, which I wasn’t long in figuring out,” says Shane. “Locals love being out and about and mingling in the mornings. We have a fantastic breakfast trade.”

The breakfast menu boasts traditional favourites like porridge, granola and Full Irish and more modern options like sautéed wild Irish mushrooms or smashed avocado with a tomato concasse on sourdough. A substantial brunch menu includes chowder, a selection of burgers and fish and chips. All of the meat on the menu is sourced from Caherbeg in Rosscarbery. There is also a selection of stone baked ciabatta sandwiches and wraps to choose from.

Once brunch finishes at 4pm, there is a brief pause before dinner service commences at 5pm, with last orders at 9pm, 9.30pm at the weekend.

The evening menu is an ode to seafood with pots of mussels and fresh fish delivered daily off the day boats. To start, try the sautéed prawns and chorizo cooked in fresh chilli, garlic and lime and finished with chopped herbs garlic bread or the signature seafood chowder. Main courses include Grilled Seabass with a smoked sundried tomato and prawn concasse and fried caper berries, served with seasonal vegetables and potatoes; Cajun blackened Salmon; or the Seafood sharing platter. There are also plenty of meat and vegetarian options and the specials change daily. “We wanted to create a menu that attracts all ages,” says Shane. “Good food in a nice atmosphere…it doesn’t have to be dramatic,” he shrugs.

Shane doesn’t faze easily: A good attribute in running a busy restaurant. Perhaps it comes from working from the bottom up. He has worked all jobs, from bottle washer to front of house before rising to the ranks of General Manager, running The Moorings in Port Magee in Co Kerry and the reputed Sage in Midleton before deciding to open his own business. ‘I got tired of making money for other people,” he shares.

Future ambitions stretch further than Bantry. Shane is casting his eye around West Cork for a suitable location to open a second restaurant.

Tue Nov 2 , 2021
November brings us to the moment where we appreciate big bowls of warm food, and Pho fills that spot beautifully. Pho, which is pronounced Fur – not a P in sight, is the national Vietnamese noodle dish. This comforting bowl of slurpy noodles manages to be not only nourishing but […] 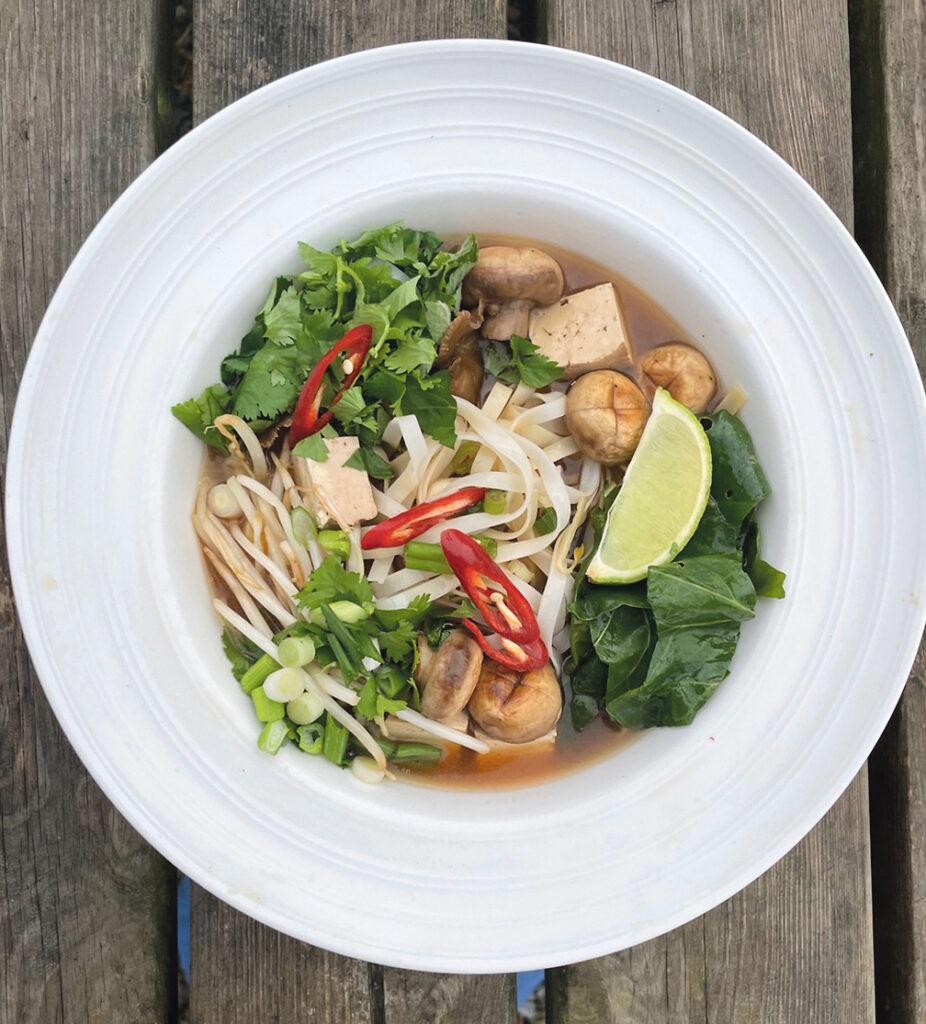