Restoring our ecosystems and reversing biodiversity declines has never been so important. While not without some controversy, for example the debate sparked by the concept of ‘bringing the wolves back into the Irish countryside’, ‘rewilding’ our land has been described as a progressive approach to conservation that can bring us closer to realising these goals and help to mitigate the effects of global warming and climate change that is causing our planet to slowly perish.

It’s about helping nature to help itself, which Mary O’Brien says can be seen just outside Ballydehob and not far from Bantry, off a quite boreen in the hills of the Mizen Peninsula, where Glensallagh provides just such a wild haven for some of West Cork’s natural world. The wildness of this diverse habitat is its beauty: Buddleia bushes pulsate with the susurration of literally hundreds of butterfly wings; the undergrowth left to its own devices speaks too in the stridulation of insects under its protection; heads of wildflowers sway, not with the wind, but with the vibration of visiting bees; birds call out overhead or sing from neighbouring trees.

Purchased in 1989 by now retired exploration geologist Richard Speir, this 47-acre property was originally farmland but over the years under Richard’s custody, a mixture of native and exotic plant and tree species have been planted to rewild the land and encourage pollinators. Today the property is a tapestry of wildflower meadows, woodland and glades. However it’s not all about providing sustenance for our wild friends. Glensallagh is also renowned for its bounty of fruit and vegetables, most of which is sold locally to shops and restaurants, and Richard has been known to cultivate over 200 varieties of vegetable in a good growing season, especially oriental and continental salad leaves and brassicas. There are two vegetable gardens, maintained entirely on organic principles, two greenhouses with peaches and grapes, an extensive fruit garden, orchard and two polytunnels. In 2019, Glensallagh was acknowledged in the craft category at the respected Euro-Toques Ireland Food Awards for its eco-friendly and varied vegetable production.

Before establishing roots in West Cork, Yorkshire born, Scotland raised, Richard Speir roamed this planet as an exploration geologist, from Australia where he also worked as a sheep stockman, over the Star Mountains in Papua New Guinea and across the plains of Africa. In 1980, his work with a Canadian Company brought him to the green of Ireland for the very first time. It was during this brief sojourn that Richard decided to make his stay more permanent and base himself in West Cork; he bought a property in Castletownshend before heading off again on his travels with work – back to Australia, Tanzania for the first time, followed by some consulting work in London.

“I never really felt like I belonged anywhere and when you feel like that it’s easy to work in an industry like exploration,” he explains. “It offered me the opportunity to travel and see all these amazing places all over the world, the Serengeti for example, one of the most spectacular landscapes I’ve ever visited…we had it all to ourselves.”

Richard admits that around this time, while he still loved the travelling, he did tire of geology. Intent on making a change, the intrepid explorer bought a 43ft voyaging yacht with the ambition of supporting inshore marine research; and sailed to Azores, supporting Dr Euan Dunn (Principal Marine Advisor at the Royal Society for the Protection of Birds) et al., ringing Roseate Tern chicks. After a few more years of sailing on the Western Indian Ocean, helping with various inshore research projects on protected species and dodging pirates along the way, his funds began to dwindle. Following a necessary revisiting to exploration work, Richard returned to London in 1990, where he set up a Trust with the aim of funding a ’70 catamaran sailing research vessel, a project which unfortunately was not successful. It was at this time that he also purchased the Glensallagh property outside Ballydehob.

Richard spent the next few years living and working in Tanzania, until the collapse of the mining and exploration industry in 1997 brought him back to Glensallagh, where alongside doing some consulting work, he threw himself into toiling the land and creating a productive vegetable garden. During this time, he also set up and ran an exploration office in Tanzania for an Irish consulting group, which is where he met Dr Julie Hastings (Jules), a medical anthropologist. Jules returned with Richard to West Cork and proved the impetus the wanderer needed to finally relax into one landscape; the couple settled at Glensallagh, growing vegetables and planting up to 200 species of trees and shrubs.

In the early 90s, Richard had planted 18,000 trees on Glensallagh, including a mix of oaks, ash, sycamore and beech, on roughly two thirds of the available ground. Now in the company of these, there are many more exotic specimens thriving in the temperate climate of West Cork; Nothofagus antartica, the southernmost tree species in the world and the unusual Carrierea calycina or goat horn tree, native to China, to name just two.

While Sitka and Lodgepole pine were originally planted on some of the property, these are now about to be harvested and an ambitious rewilding project is planned for the 10 acres.

Richard’s vision is to set up a ‘Born to Rewild’ Trust to fund an initiative that would see Glensallagh being utilised for academic research and public education.

However, he has now reached the great age of 77 and, while still sporting the same enthusiasm for life and his projects; Richard is not as strong in body as he used to be. Glensallagh needs a new energetic custodian to drive it forward. “An academic smallholder would be the perfect candidate, someone with an interest in research,” says Richard passionately.

“There are so many things we could do,” he says. “The bird and insect population has gone up enormously since we started planting trees and let nature do its thing underneath and around them all.”

Aside from the rewilding project, there is also the opportunity to develop the vegetable growing business and raise stock under and beside commercial forestry. There is enormous potential at Glensallagh for the right person.

How will Richard keep busy when he does hand over the reins? He has it in mind to find a sound 75ft fishing boat suitable for converting to sail for use as inshore research on the Atlantic coast.

After all, as a wise man once said: ‘It’s better to live rich, than to die rich’…

Mon Sep 6 , 2021
Cork County Council has been allocated €320,000 to support the upgrade and enhancement of shopfront and street facades in six county towns through the Streetscape Enhancement Scheme. Bandon, Castletownbere, Charleville, Fermoy, Macroom and Passage West are set to receive support through the scheme, funded by the Department of Rural and […] 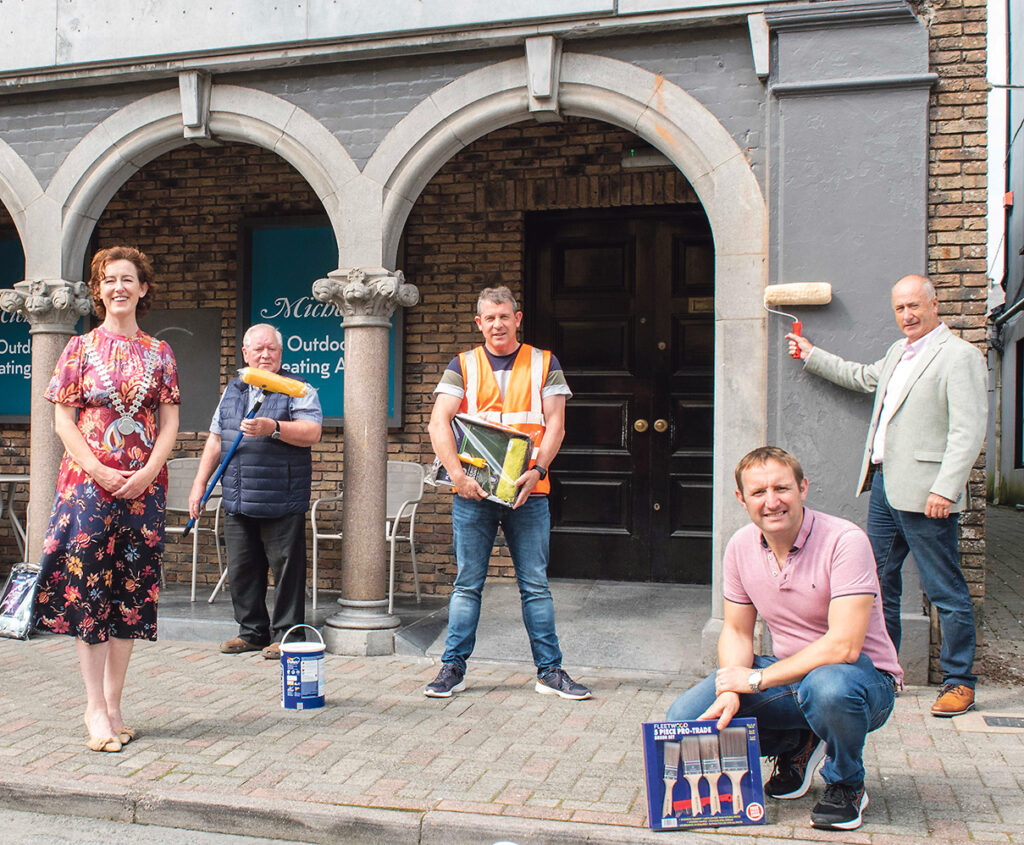