When Maggie McColgan and her husband Michael decided to up sticks from Minnesota in the US and relocate to Ireland at the beginning of 2020 with their pet Labrador Iris, little did the couple, recently married, imagine that their new life would involve circumnavigating a pandemic in a 16 by 6 foot converted ambulance, and eventually find them settling permanently in the village of Ballydehob in West Cork.

“That first winter was so cold,” recalls the development consultant and grant writer “and there were more than a few times when we wondered what we had done, leaving our comfortable three-bed house behind us in Minneapolis to freeze in a van in rural Ireland…but living in a van during this pandemic has given us the privilege of isolating ourselves in nature for long periods of time. We feel really lucky to have landed in West Cork, where we have experienced so many acts of random kindness.” The van has no toilet, shower or oven and Maggie and Michael were surprised by the number of invitations they received to avail of facilities in people’s homes.

Michael has family in Ireland, which was the initial appeal with moving here, but the couple were also looking for a new adventure, a breath of fresh air as such, after living through the Trump era in the US.

“The idea behind the van was that it would facilitate our adventure while also helping us discover what we could live without,” explains Maggie. “We were coming from a three-bed house in Minneapolis that was too big for us so we wanted to rethink our consumption. This process has helped us simplify our existence and quieten our minds. While our small living space has forced us to get closer physically, it has also helped us get closer emotionally and evolve as a couple.”

Maggie had been working as the membership director for a youth intervention programs association in the US but moved into consulting work to facilitate working remotely in Ireland. Michael’s work in video editing also translated easily to a remote working situation.

After arriving in Ireland, the couple collected their new transport-home-workplace all rolled into one and, after a short spell parked up outside Michael’s cousin’s house in Dublin waiting for the insurance to come through; began their trip down the coast, reaching Tralee just as the first lockdown was announced.

“Like everyone else, we didn’t know what was going to happen so we parked up just outside the Killarney National Park,” explains Maggie. When the lockdown was extended in April, the couple realised a more permanent base was needed so they started looking up Airbnbs. After coming across the ‘tractor shed’ located in Glensallagh, just outside Ballydehob, they booked in, checked in with Bantry Garda Station to let them know why they were travelling, and hit the road.

The couple were able to combine working in the gardens at Glensallagh in return for their board with their own respective jobs and quickly made friends in the local community.

“We feel really lucky as everyone is so friendly and open here and there are so many people doing really creative and sustainable things, which is pretty inspiring,” says Maggie.

The van is now parked up outside their new rental house but Maggie says they’re not ready to let go of it just yet. “Living in a van means that wherever we go, we are always at home, so we hope to have a few more adventures in it around Ireland…but during the weekends!”

A nature enthusiast, a lot of the projects Maggie is now involved in have some connection to nature or the local community and are things she feels strongly about, from helping a kelp harvesting farm scale up to advising a sustainable clothing company in its infancy. She has also kept on some of her US clients and is still consulting for companies who are involved in policy-making. Making policy accessible to people is something she’s really passionate about and wold like to get involved with here. “Policy governs so much of our day to day lives and yet in some ways it’s so removed from us,” she says. Grassroots organising is a really important part of this,” she says. In her previous role, Maggie took part in lobbying for money to be diverted from the criminal justice system into preventative youth programmes. “We were really successful because we had a swell of organisations all saying the same thing – we need to invest in our young people.”

When she’s not engaged in doing consulting work for businesses, Maggie volunteers as the development director for Cork Nature Network (CNN), an organisation that works at protecting and promoting Ireland’s wildlife through education, conservation, and research.

She is also really excited about the ‘Born to Rewild’ project planned for Glensallagh, which will be in partnership with CNN. “We have a draft agreement and have already started to raise funds for baseline surveys on butterflies and moths, birds, stream quality and so on.”

There is huge value in being outside and connected to nature, which many people got to experience during the pandemic. “Seeing yourself as a part of nature instead of separate to it is really important for people, particularly young people,” says Maggie, who sees the Born to Rewild project as having a valuable part to play in education and preventative youth programmes, which she says offer a huge return on investment.

“It’s the same with climate and social programmes,” says Maggie. “It does make sense to invest in community. When there are opportunities and education and jobs for young people, there is going to be less crime.”

While the couple have recently returned to the States; the five-week trip will be centred around selling their house in Minneapolis and catching up with family and friends before returning ‘home’ to Ballydehob, where Maggie has dreams of one day running her own ‘green’ cottage  industry….but that’s a story for another day!

To watch some of Maggie and Michael’s adventures over the past year you can subscribe to their Atomic Kinship youtube channel and follow them on instagram@atomickinship.

Mon Oct 4 , 2021
Winners of the 2020 BT Young Scientist and Technology Exhibition, Cormac Harris and Alan O’Sullivan, have triumphed, taking home first prize at this year’s European Union Contest for Young Scientists (EUCYS) with their project entitled: ‘A statistical investigation into the prevalence of gender stereotyping in five-seven-year-olds and the development of an initiative to combat […] 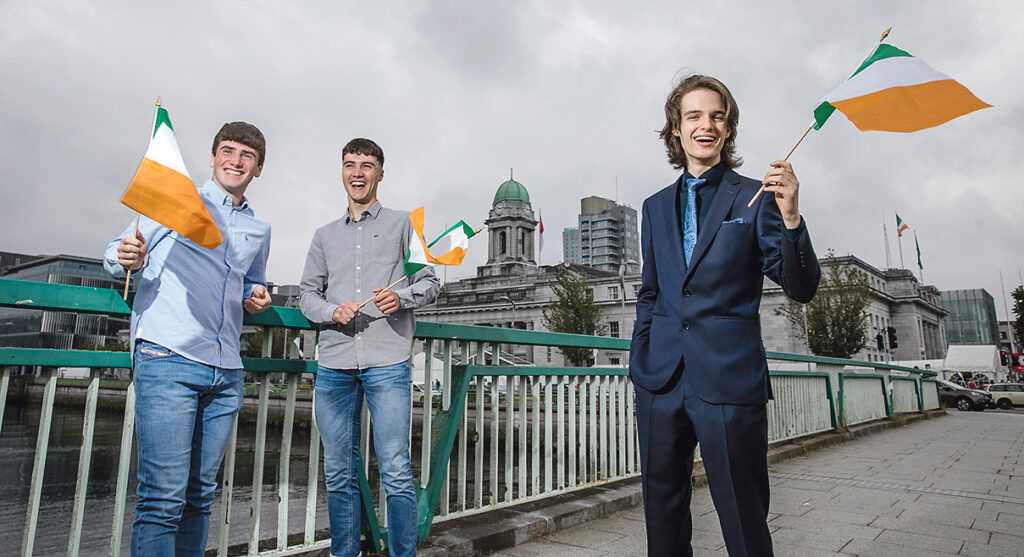