The Everyman Cork has announced a programme of live performance with a mix of rehearsed readings, comedy, and music. The re-opening heralds a new digital direction for the theatre with Play It By Ear, a programme of shows at The Everyman, which are also available live through audio broadcast to be experienced from wherever audiences are.

Naomi Daly, Acting Programming Manager at the theatre says, “we are celebrating the voice as we focus on bringing Cork’s wealth of local talent back to the stage along with some of our established favourites. It feels great to be turning the lights back on and throwing open the doors after our longest period of closure in over 30 years. We’re really excited about this programme and I hope our audiences will agree that we’ve ‘knocked it out of the Pairc!’”

Play it by Ear could be a synonym for ‘to improvise’, ‘rise to the occasion’ or ‘to think on one’s feet’. The Everyman has adapted to the new experience of performance by creating an exciting and innovative programme that highlights the exceptional theatrical talent in Cork. As part of Play It By Ear, The Everyman presents a series of rehearsed readings, opening on October 15th with Marion, by Katie Holly who was this year’s ambassador for Cork County Culture Night. Katie says “I am so pleased and proud to be involved in the reopening of The Everyman’s programme; a gorgeous, atmospheric venue that encourages and inspires the people within its walls to make great, entertaining, thought-provoking theatre.  I’m also delighted to be working with Laura O’Mahony, Tadhg Hickey and Eadaoin O’Donoghue on a reworking of my first professional play ‘Marion’, which was first produced in 2016 for Cork Midsummer Festival.”

The Everyman continues to fly the flag for local theatre makers presenting The Whiteheaded Boy – a comedy in three acts, by Lennox Robinson and directed by Ger Fitzgibbon. Full of twists and turns, ups and downs, and families fighting each other, the play is as relevant today as when it was first performed in 1916. Not only does it reveal the dynamics of a family, but it is also a pointed analysis of Irish culture.

Later in the month, Ger FitzGibbon returns with his play The Four Faced Liar, whenthe voices of the four faces of Shandon Steeple come alive with a commentary on the city’s inhabitants below.The final rehearsed reading is the darkly chilling play The Seafarer, by Conor McPherson, directed by John McCarthy.

For music lovers there are two spectacular live music shows to look forward to as part of Play It By Ear. Majella Cullagh, one of Ireland’s foremost sopranos, returns to The Everyman with songs from the golden age of musical theatre from the genius collaboration of Rodgers and Hammerstein, accompanied on piano by John O’Brien. Feeling Good with Karen Underwood and John O’Brien brings us a night of heart-warming, and roof-raising jazz, soul, and blues with interpretations of the songs of Billie Holliday, Nina Simone, Dinah Washington, Whitney Houston and Amy Winehouse.

We are also looking forward to In One Eye Out The Other, acclaimed Irish comedian Tadhg Hickey’s part theatre, part stand-up comedy, show which was  the most nominated show at Dublin Fringe Awards 2019.

There are old favourites, such as the return of Aidan Dooley in Tom Crean – Antarctic Explorer, a compelling and humorous retelling of the story of the intrepid Antarctic explorer who hailed from Annascaul, in Co. Kerry.

It has been incredibly challenging for The Everyman to confidently take the steps to opening its doors again. Due to current indoor gathering restrictions the theatre’s 650-seat auditorium will be operating at a greatly reduced capacity. Available tickets will sell out quickly.

Sean Kelly, Executive Director of the theatre says, “the restrictions are not viable to maintain in the long term. The Everyman has an obligation to serve the people of Cork and provide support and connections to artists. We are incredibly thankful for generous donations received from our patrons. These monies, along with Arts Council Funding, will allow us to be viable until the end of the year.”

The Everyman will continue to adhere to guidelines to ensure the safety of everyone who visits the building. When the theatre opens its doors, visitors will notice an improved and more comfortable look as the closure period was used to finish some very timely upgrades to the building, including a makeover to the public toilets, accomplished through historic grants from the Department of Culture, Heritage and the Gaeltacht and Cork City Council. This will ensure an improved, safer, and more comfortable experience for all.

Some productions will be reduced in scale, others reimagined to fit the new experience of live events, while more will fit very happily. It is certain there will be great excitement for audiences who are keen to return to live performance at The Everyman in Cork.

Tickets for the upcoming shows go on sale at noon today, Tuesday 22nd September, via everymancork.com

Clon connections to Cork success in 1945

Wed Sep 23 , 2020
While winter might be a strange time of year to see Cork GAA in championship action, the football match against Kerry is a rivalry we’re all familiar with. Pre Covid saw a number of Clonakilty players donning the county red with Sean White, Maurice Shanley, Thomas Clancy and Liam O’Donovan […] 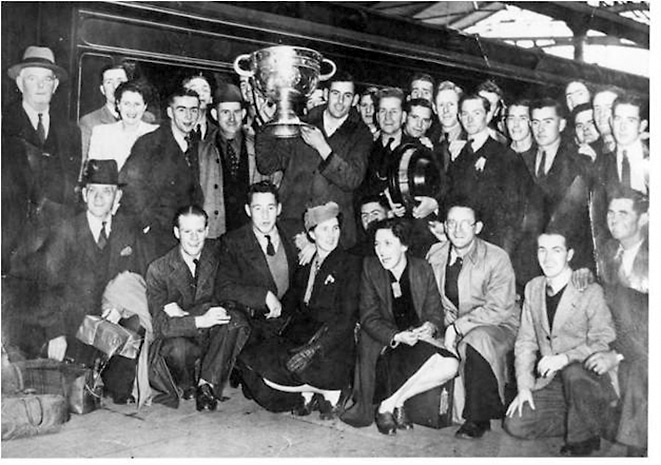