Blue House Gallery in Schull will celebrate its tenth anniversary in 2022 with a blockbuster programme of exhibitions from both at home and abroad, celebrating the capacity of a small visual art gallery to thrive on the main street of a West Cork village and to develop a cohort of highly engaged artists and supporters.

It became obvious during the earlier gaps in the lockdown (BHG opened on July 4 in 2020) that public enthusiasm for the gallery’s exhibitions was well-established and artists more than happy to present their work in solo and group exhibitions during an otherwise very gloomy and constricted period for the visual arts in Ireland. The attitude of the gallery management is very much the mantra of ‘the show must go on’ and feel gratified and supported as each premises along Main Street turns on their lights and opens their doors to a public, starved of the opportunity to support the local economy, whether by buying art or feeding their families. They look forward to an exciting period for 2021.

With a reduced summer season of exhibitions, there still are great shows to look forward to, bringing familiar names with new work, as well as fresh faces to the local exhibition scene. Applications to exhibit from artists as far afield and as unlikely as Dubai (Dubh Atha? No, it’s not an obscure townland in County Offaly) suggest that BHG’s reputation has spread beyond the environs of West Cork.

Group shows of different character occur throughout the season, opening with a general exhibition of gallery artists (04-23 June), followed by the main exhibitions in the downstairs gallery: ‘Clay Maketh Man’ (June 25 July 14) featuring six of the country’s most celebrated ceramicists, curated by Jim Turner of Rossmore Pottery, himself an endlessly versatile  creative spirit, as well as an engaging raconteur of the arts scene. In tandem will be Aoife Layton showing mezzotints, one of the more obscure areas of printmaking, of which she is a master.

Helen O’Keeffe’s ‘The Landscape Within’ follows (July 16-August 4) with a show of her paintings drawn from her deep engagement with the coastal landscape of the region in which roads wander and the untrammelled nature of fields and hedgerows tend to reach out to the viewer with that characteristic West Cork sense of wild abundance.

Stephen Lawlor (Aug 6-18) ‘A Liminal State’, prints, paintings and sculpture, comes with the publication by Gandon of a substantial book on his work with text by, among others, John Banville. Lawlor is a leading figure in the world of contemporary printmaking has shown his work internationally.

‘Two Painters’ (August 20-Sept 1) comprises two artists from outside the realms of West Cork, the Australian-born Kym Leahy and Nadette Charlet from France, both bringing an eye attuned to different light, angle and scale to enrich local visual interpretations. ‘Indelible’ by Johanna Connor (Sept 3-15), uses polaroids, objects and paintings/drawings to presents the question of ‘recognising the familiar in the unfamiliar’, the manner in which arbitrary objects can assume meaning on account of their associations in ‘place, time and history’. Lastly, ‘Diamond Point (Sept 17-29), Graphic Studio Dublin’s 60th anniversary exhibition. GSD pioneered the art of printmaking in Ireland and is one of the great survivors in the perilous world of living on your art. Brian Lalor’s magisterial history of the studio ‘Ink-Stained Hands’ (Lilliput 2003), lavishly presents the evolution of this important artists’ cooperative.

Tue Jun 8 , 2021
Navigating a high modernist terrain, somewhere between Rothko and Tapies, Michael McSwiney’s new paintings deliver that unique combination of chromatic punch and visceral, mood-trembling, surface which never fails to capture the gaze, before holding it in meditative stillness. It is a combination we’ve come to expect from this exceptional West […] 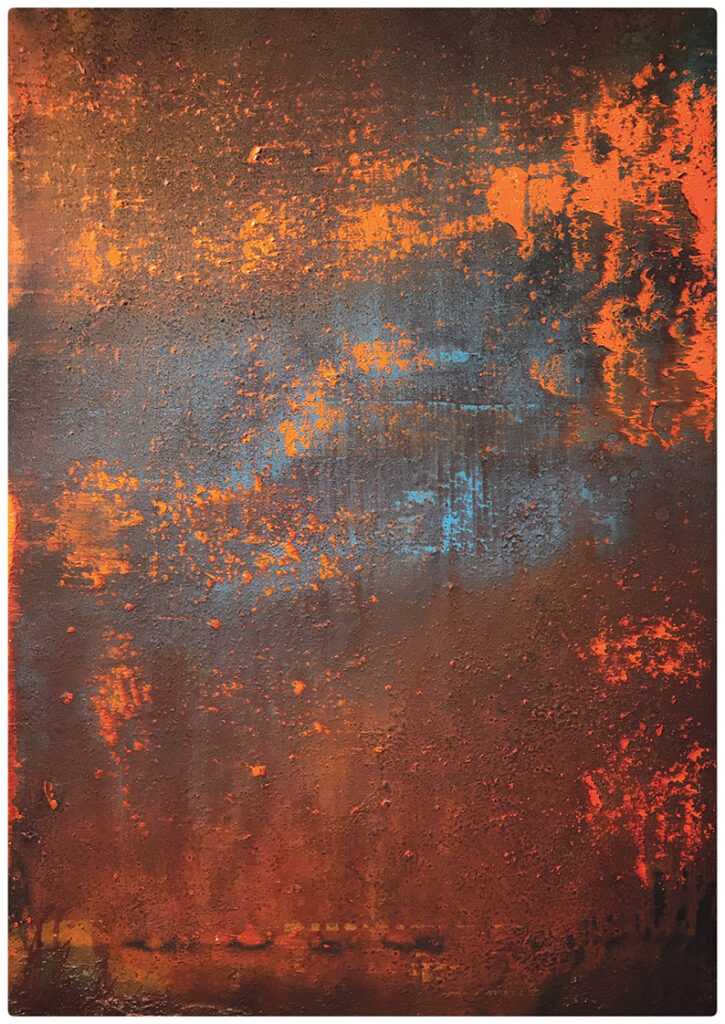