Shortly after 9am on February 15, 1921, a train heading westwards from Cork City, pulled in to Upton railway station, midway between Crossbarry and Innishannon. One of its carriages was carrying members of the dreaded Essex Regiment and IRA Brigade Commander Charlie Hurley was lying in wait with an ambush party and a plan of attack. However things went drastically wrong for Commander Hurley, as amateur historian Pauline Murphy explains.

Commander Hurley had positioned himself on the pedestrian bridge that spanned the railway line. Volunteers Flor Begley, Sean Phelan, Patrick O’Sullivan and John Butler were in the waiting room of the station; Paddy O’Leary stood at the wicket gate outside; Sean Hartnett was at the wall of the signal cabin and Batt Falvey was positioned in the goods store with Neilus Begley. Tom Kelleher and Denis Doolan hunkered down behind the wall at the goods yard, whilst Dan O’Mahoney and Denis Desmond were behind the wall by the post office. Paddy Coakley took up a position at the window on the top floor of the Railway Bar.

Before arriving at Upton the train had made a stop at Kinsale Junction, where unbeknownst to the IRA, a troop of British soldiers boarded. Sean Hartnett’s brother Bill, who was at Kinsale Junction, hopped on his bicycle and sped towards Upton to warn the ambush party that they were outnumbered. Unfortunately, the train proved faster than Bill’s bike and by the time he reached Upton the disastrous ambush had played out.

As the train pulled into Upton the IRA launched its attack by shooting into the carriage they thought was carrying only soldiers. However, the soldiers had mingled with other passengers and this proved deadly for the unfortunate civilians.

Upon realising how much extra manpower the British had, and the number of civilians getting caught in the crossfire, Commander Hurley called for an immediate retreat.

As Hurley jumped from the bridge a bullet hit his face. Under a hail of bullets Tom Kelleher managed to get to his commander and carry him away to safety. Dan O’Mahoney was also hit and carried away by Denis Doolan; O’Mahoney would die some years later as a direct result from the wounds he received at Upton.

Three of the IRA party were killed at Upton: Lieutenant Patrick O’Sullivan was hit but escaped by crawling through a drain. He made it to a safehouse but with wounds so severe that he was quickly taken undercover to the Mercy Hospital in the city. The 37-year-old coach builder from Bandon died in hospital days later; 22-year-old Batt Falvey, a farmer’s son from nearby Ballymurphy, was killed instantly when a bullet struck his head; 21-year-old Sean Phelan, born in Liverpool to Irish parents, was shot as he tried to escape through the waiting-room window.

In the years after the Upton Ambush a small iron cross was erected at the site. It was replaced in 1968 with a limestone cross commemorating the three IRA Volunteers who died there.

There were no British soldier casualties that day but there were civilian deaths:

James Byrne was a 45-year-old man from Louth. Married with five children, he lived at No.5, St. Clare’s Terrace, Dublin and had just started a new salesman job for the shoe company Cridland & Rose. On his first business journey south to Cork he was killed instantly when he was struck by a bullet while sitting in the train carriage.

John Spiers was a 58-year-old widower from Tyrone who had lived in Cork for over 20 years. He worked as a travelling salesman for the Warden & Co tea company. After his death in Upton, Spiers was buried in Douglas cemetery, leaving three children behind without their parents.

Charles Penrose Johnston was a 55-year-old coal merchant, originally from Cork but living at No.104, Upper Rathmines Road, Dublin. He was on a business trip to West Cork when he was killed instantly on the platform.

Richard Arthur was a 41-year-old ticket inspector from St Lukes, Cork City. The Tipperary native was an employee of the South Coast Railway for over 20 years. He was hit in the leg in the station waiting room and was brought to the South Infirmary hospital, where his leg was amputated. He died four days later.

Thomas Perrott was a 56-year-old painter from Thorndale, Douglas Road. He was killed outright at Upton station and his funeral to Douglas cemetery was noted in the press as being ‘an impressive one’  as he was a popular figure in the area. He left behind a wife and seven children.

John Sisk was a 48-year-old signalman from nearby Ballymurphy. He was caught in the crossfire between the IRA and British soldiers and took two bullets. He survived long enough to be brought to the South Infirmary but died two days later. He was buried in Ballymartle and left behind a wife and five children.

William Finn was a 25-year-old merchant seaman from Rosscarbery. He was on his way west to attend the Baltimore Fishery School when he was shot dead.

Mary Hall was a 32-year-old servant who worked at Ballycurreen House in Cork City. After a busy Christmas in the big house, Hall was granted a few weeks off and was on her way home to Castletownbere to spend her break with her parents on their farm. She never made it back to Beara but was killed by a bullet while sitting in the train carriage.

The railway no longer goes through West Cork and the station at Upton has been silent for several decades. But the area hasn’t changed much since that dark day 100 years ago; the station house remains, as well as the Railway Bar, along with the old post office and outbuildings. No doubt, the ghosts of those slain there also remain.

Tue Feb 9 , 2021
Minister for Transport, Eamonn Ryan and Minister of State Hildegarde Naughton TD have announced funding for up to 248 new jobs to implement Active travel infrastructure. They plan to employ 218 staff across local authorities with an additional 30 proposed for Regional Cycling Design Offices. The announcement has been celebrated […] 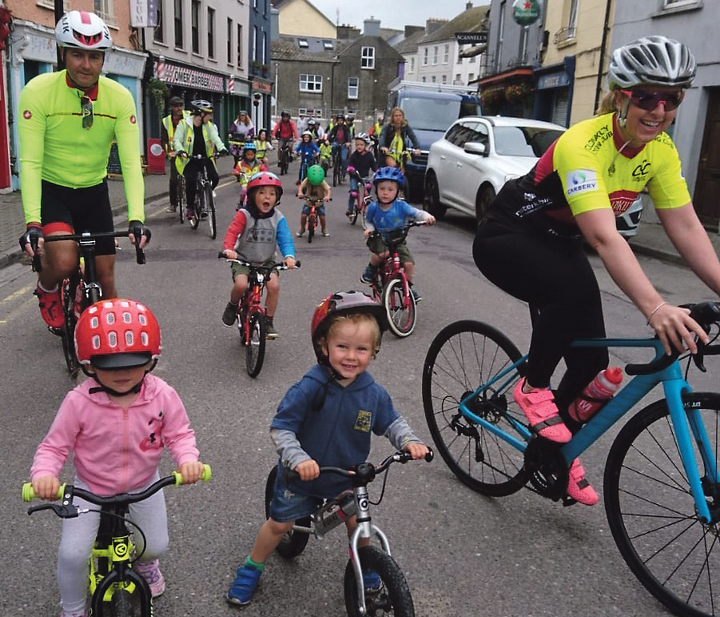