A youthful face peers at the viewer, in the midst of a stream of sleep-walkers, wading through water in brightly coloured robes. All the faces are similar, reminiscent of the generic faces in the paintings of Piero della Francesca or Giotto. The gaze levelled at the viewer is direct, solemn, inscrutable. This androgynous figure with his/her strangely horned hat knows something that we do not. He/she is a part of Alessandro Sicioldr’s dreamworld, a world of visionary images which seems to resist and invite interpretation in equal measure.

Alessandro Sicioldr, a 32-year-old painter from Tuscany, is a rising star of figurative painting in Italy. Entering an exhibition of his work, as I did in May, is like stepping into a room of medieval, moonlit riddles. Sicioldr writes, in the catalogue for his exhibition ‘Il Maestro, La Voce, La Luce’, “I look at what I have painted as if I were observing the memories of a dream”, and in another passage: “When the unconscious speaks one observes it.” He professes not to initially understand the images that come to him, that flow from his hand, as if “in a trance” and, according to Luca Fiore, “prefers the viewer to take on the role of Dr. Freud, if they so wish, or else to join him on the analyst’s couch.”

It is a creative process which I identify with both as a painter and a poet. When poems arise from within me, they often flow, as if pre-formed onto the page; they come in magical lines which often defy meaning, but which feel extremely compelling. One particular example is a poem called ‘Balance the Roses’, the beginning lines of which I deleted three times, before allowing them to continue: “Balance the roses. What is that? Balance the roses. Again, what is that? Twins balance roses in the darkness. In the mirrors, in the darkness…”. It was only sometime afterwards that I realised the finished poem’s significance. This is the power of the creative subconscious and it is what flows through Sicioldr’s work as a painter.

Paintings like ‘Portaluce’ / ‘Light Holder’ (2022) and ‘Somnambuli’ / ‘Sleepwalkers’ (2021) are images which seem made for Samhain, presenting, as they do, collective submersions in dream and ritual. The pictorial element of water, in which Sicioldr places his figures, becomes an apt metaphor for the submersive dream state. In ‘Portaluce’ the central masked figure, knee deep in a water hole, flaming torch in hand, appears to embody the ancient archetype of the ‘voyager between worlds’, an archetype as old as the Mesopotamian epic of Gilgamesh.

The principle metaphoric elements in the works which comprise ‘Il Maestro, La Voce, La Luce’ are: light (emanating from a mouth, a container, a flame, the sun, the moon); water (in a vessel, a river, a pond); and: effigies and masks (miniature statues of the figures who hold them, marionettes, the plague doctor, the wife, the priest/ess).

The circularity of light between vessel, mouth, flame and moon is particularly intriguing and stands out in two relatively small works, ‘Il Maestro o La Voce’ and ‘Il Sognatore’. In ‘Il Maestro o La Voce’ / ‘The Teacher of the Voice’ (2021) a face, emanating light from its mouth, is pictured nestled in a tree. One of three figures standing in water, leans towards the lit mouth, as if listening. The central figure is a black-robed ‘plague doctor’, whilst the third appears to support the ‘listener’. In ‘Il Sognatore’ / ‘The Dreamer’ (2021) a large sleepy figure drinks from a vessel of light through a straw, a face behind a curtain emanates light from his/her mouth, whilst in the distance falls the last light of dusk.

Sicioldr’s compression of an ‘inner light’ with an open mouth or ‘voice’ is a deeply poetic one, endowing his scenography with both a visual and metaphoric logic. Everything points to revelation, spiritual sustenance, inner awakening, all shadowed by the presence of death (the plague doctor), as this too is a part of self-knowledge. Sicioldr’s metaphoric use of light puts me in mind of the words of Lao Tzu: “Seeing into darkness is clarity. Use your own light and return to the source of light. This is called practicing eternity.”

If Sicioldr’s imagery speaks to the eternal it is only because his compositional design and painterly application enables it to.  As a visual composer and oil painter he draws deeply from the Western figurative tradition. Through his work one catches echoes of painters from Bosch, DaVinci and Masaccio to Magritte, Arrivabene and Nerdrum.

Sicioldr’s paintings are beautiful enigmas in the medieval dark; visions which cloak, not only a deep inner life but also a hidden mantle of art historical influences, from Hieronymus Bosch to Rene Magritte. His work is a torch of continuity, linking the past and the present; a space of compositional stability which invites us to enter our own dreamworlds, on this festival of Samhain.

Between Sky and Land on show at Kenmare Butter Market

Tue Nov 1 , 2022
Kenmare Butter Market is hosting an exhibition of new works by three very exciting contemporary artists: Ian Calder, Fionnuala Nolan and Anne Marie O’Shea. ‘Idir Spéir agus Talamh’ opens on October 29 at 6pm and runs until November 25. Though quite a diverse trio, all the artists show experience of […] 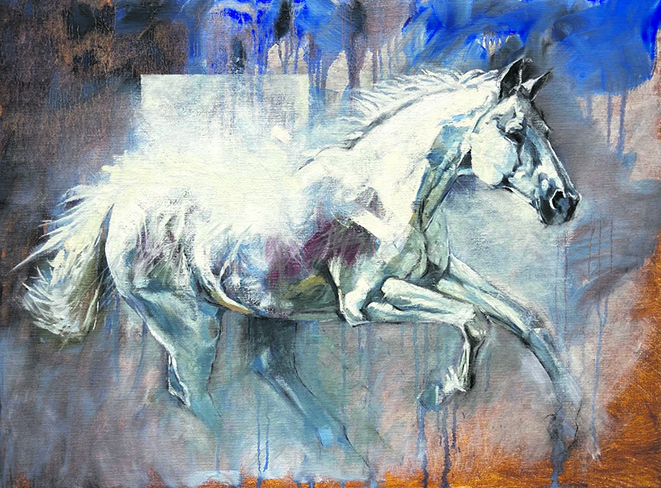