With a mature painting language and an award-winning art career spanning 30 years, Michael McSwiney is in his prime, unfazed by life’s challenges and as passionate as ever about his craft.

I caught up with Mike at his home and studio in Ardfield, near Clonakilty. His studio, which he built himself, overlooks the sea, the very same ocean that lapped at his imagination, growing up near the docks in Glenbrook, in Cork’s Harbour. Inside the studio other liquids are in the process of drying, both water based and oil based, some drying into each other, forming minute craters, like the surface of the moon.

Protagonists lie about the place: spatulas, tins of paint, spray bottles and spray cans, along with their various fields of battle: large and small canvases both propped and lying flat, on the equally paint-splattered floor.

Surfaces, textures and their attendant histories are the leitmotifs of McSwiney’s career, fed by an unusually heightened visual awareness. From dry-dock walls to ship facades, handball alleys, ski jumps and war bunkers McSwiney has, throughout his life, been moved by the residue, the stain, the abandoned structure. The artist explains that his fascination for these elements developed from childhood:

“You don’t get to choose where you grow up, and what I saw growing up was the tide, coming in with metallic silver hues and out with mud greys. The stains left by the tide on the dock walls is what I’ve been painting my whole life.”

As we stand in the studio, metallic shimmers and pooling water beads glance off surfaces. Mike points out a “copper feel” in one of his pieces, resonant of “certain kinds of light you get in the sky here.” We start talking about his processes and what drives him as a painter. He explains that it’s really a constant experiment, completely intuitive and these days completely abstract.

“For me they’re completely abstract works, or not even that…it’s not a landscape, a seascape, an abstract. It just is what it is. The horizontal band just appears automatically and always at the bottom, like it’s weighting the painting. When the painting is finished I can reflect then…it might remind me of a dry-dock wall growing up…”

It might be surprising for people to learn that there is actually no intention to create an abstracted seascape, a fact seemingly contradicted by how McSwiney titles his paintings. The titles come after the fact, however, drawn from an ever-growing list of one-liners gleaned from music, reading, conversing and playing with words. As Mike says, he only titles them to avoid calling them ‘Untitled’. One suspects, however, there is a little more to it; a poetic association and a love of language that sings with his visual world. Titles like ‘Manna’ (bread from heaven) were picked up in church as a child and McSwiney clearly loves its metaphoric resonance. Unlike Manna, however, McSwiney’s paintings did not simply fall out of the sky, so we start to talk about his origins and his development as an artist.

McSwiney explains that he came “from a big family and nowhere was there anything, anything to do with the arts.” There was, however, construction (from an early age he was digging foundations for houses and learning to build), painting boats, and shoveling coal (his father was a coal distributor).

It is surprising to learn that as late as 5th Year at school McSwiney had no idea what an art college was, that he got into the Crawford by “the skin of his teeth”, and that up until then he had had “a terrible education.” He loved foundation year at the Crawford and tried everything, graduating five years later with a B.A. in Fine Art from NCAD, having specialized in woodblock printing.

Speaking of his influences during college McSwiney relates, “at the time I was doing 14-colour woodblock prints. I was hugely influenced by the Die Brücke artists (German expressionists), and in 1986 I saw an exhibition of Kiefer’s paintings and woodcuts.” Anselm Kiefer’s huge post-modern works dealing with the Holocaust left an indelible impression and remains an important touchstone. The artist recalls his first experience of Kieffer’s work:

“In 1986 I saw one of the first Saatchi and Saatchi exhibitions in London, which included Richard Serra and Anselm Kiefer.  Kiefer had a large canvas with a Nazi bath-tub, in a field filled with toy navy ships. I remember thinking, oh, f***, like. The muddy colours, the application…his message was not that he was a great painter, but that we can’t brush history under the carpet. He was a very brave man.”

The industrial nature of McSwiney’s childhood proved both formative and restrictive. As the artist himself says of his studio practice, “the way I work is the way an untrained boat painter would work ”. The building skills acquired at home also stood him in good stead in the future, when times were tough.

At the same time he couldn’t wait to leave. Attitudes in Ireland were largely negative about being an artist, so McSwiney packed up and moved to Copenhagen.

“It was a new sensation to go to Scandinavia; you’d say you’re an artist, and they’d ask if you went through a college and they’d be like ‘wow’ – from Dublin where people would say if you’re an artist you just draw the dole – it was such a downer.”

It was in Copenhagen that he really started painting and exhibiting, through a combination of good luck and fearlessness, picking up odd jobs along the way.

“I wasn’t aiming to be a great painter or anything, but I knew I wasn’t going to be mild on my expression or my application. I was going to go for it.”

Back in the studio Mike invites me to see some of his sculptures, made during lockdown. It turns out that he has always sculpted, always made things with his hands, ever since childhood: “As a kid I used to carve little boats with a pen knife, making the same little boat over and over. I made hundreds of them.” In the studio he produces a spiked bomb-like form, made from a cylinder found on the beach, wound with string and poured over with gallons of paint. He talks about the U-boats from WW1, and that these mines still occasionally wash up. Talking about sculptures and remnants he fishes out an older sculpture of a handball alley. He first started painting handball alleys in Sligo, having returned to Ireland after 3 years in Scandinavia.

“I did a spell in Sligo that was involving abandoned architecture. I was doing (painting) ball alleys and all that, you know. And then when I went to Norway I was doing abandoned ski jumps – they were lovin’ it.”

McSwiney returned to Norway for 8 years where he painted, taught and exhibited. During that time he recalls being “under the umbrella of Edvard Munch”, and how this forced him to really strive to be the best he could be: “The standard of Munch’s art is so high, you can’t go any higher. He was capable of putting into visuals the collective consciousness of a country. Munch focused in on his own country, on his own anxiety. When you walk down the street in Oslo you see Munch paintings, like, in people’s faces!”

At the same time he was heading further and further towards abstraction, gradually covering up all figurative elements until there was nothing recognisable left. But the paint itself was speaking, and the resonances and associations, then, as now, remain. “The paint has a language”, he says, “you’re searching, you’re excavating…” And what it brings up could be “the texture of a child hood memory, the feeling of a ship-side or a pier. It’s a draw back to your childhood. In a way you’re searching into the future and into the past at the same time.” Responding to the question of what drives him, he says, “it’s an energy, I’m after, like the Holy Grail…but just like a hologram, your hand goes through it. You’re making work to get to a place that you can never quite get to.”

It is this striving “to make paintings people haven’t seen before” that gives McSwiney’s work its edge. Of artists who have influenced him past and present he cites the Die Brücke artists, Kiefer and Munch. But the one he feels the most affinity with is the American artist Sterling Ruby, who also rebelled against a labouring background to make his way in art.

Tue Aug 11 , 2020
Construction work has resumed on the development of 57 homes in Clonakilty again following a temporary cessation due to Covid19 restrictions. The recommencement of work will see the estate at Beechgrove, Fernhill Road, and associated site development works, progressed to completion in 2021. Cork County Council signed a €12.5 million […] 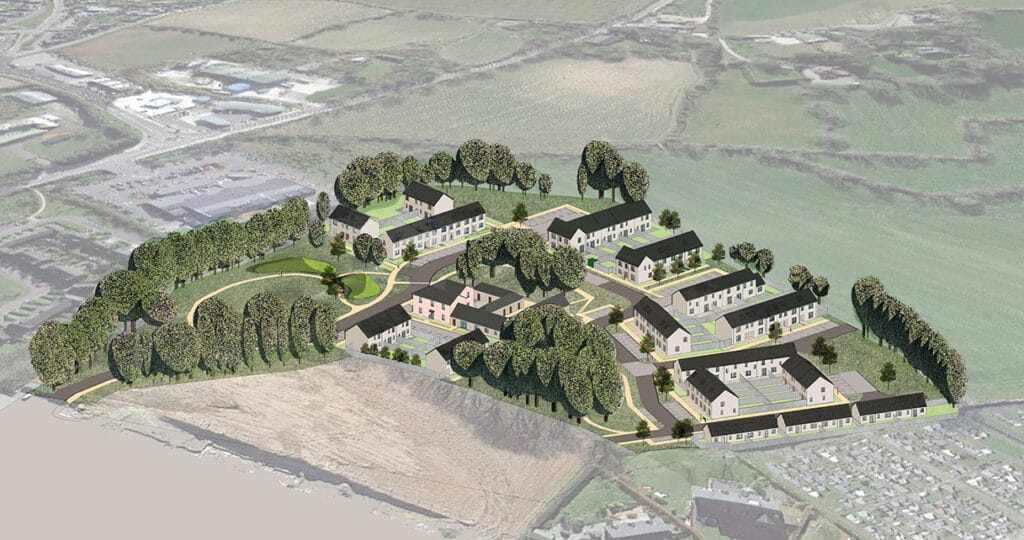