Although not technically from West Cork, city-born painter Diarmuid Breen claims a connection through his Inchigeela-born mother and Macroom-born wife Jo. Having spent many summers in Barleycove Beach and Cape Clear Island as a child, he has a lasting love of these places and got married in Goleen, “I try to be accepted with these credentials as a devotee of West Cork!” Diarmuid is exhibiting in West Cork Creates and took time to talk to West Cork People about his ongoing journey to becoming a full-time artist.

Diarmuid’s work is figurative, in oils for the most part, but also using watercolor, acrylic and inks. He and Jo, who is also an artist, are also branching out into screenprinting. “I like to create stories and figurative painting allows me to investigate the world around me. I believe there are common emotional themes that run through everyone’s life; I try to create paintings that produce an emotional response or memory from the viewer, something they can identify with.”

Diarmuid begins with small sketches and almost always has a sketchbook to hand “to try and work out what it is I’m trying to say. I call my sketchbooks ‘memory books’ as they help me remember what I was thinking at a certain point.

“Drawing from a collection of found photographs I have picked up on my travels around Europe, my work is ambiguous and nostalgic; everyday scenes can be transported to monumental events through the use of paint to create a certain mood, and I love trying to do that.”

Although he has always been interested in painting, Diarmuid’s art education came later in life. “I had my first exhibition ever in 2008 on Cape Clear, landscapes of the island, organised through Seamus O Drisceoil and the island’s Co-op. We were on the ferry home when Martin O Drisceoil (the ferryman for Sherkin) mentioned that there were interviews coming up for a Degree Course in Visual Art; I just made the deadline and managed to be accepted.

“It was a four year course with 20 other students of various disciplines and was a life changing experience. I was working for an Engineering firm in Carlow and they were really accommodating with time-off and study leave. I graduated in 2012 and I’m slowly making the transition to being a full-time artist.

“Having a mortgage and all the other financial commitments makes it harder to just give up the day job and go full-time. The owner of the company I work with, John Moore, has an interest in art so he is supportive and allows me to work around my art but still keep a roof over our heads. As my career develops I have been heartened to hear that many well known artists also need to work part-time to get through the quiet months when not exhibiting.”

Diarmuid acknowledges West Cork as a huge inspiration artistically, but not in the way you might expect, “it is the people here that are inspiring. Throughout the Sherkin course, painters like Majella O’Neill Collins and Bernadette Burns were so encouraging to us. I met so many other artists – not just in my class but the class before and after, and many more.

“I was in Sligo recently and when I mentioned West Cork a fellow artist said to me, ‘if you threw a stone at a crowd in West Cork you’d hit an artist’. He’s probably right!

“One of my biggest inspirations is John Doherty, who I admired for years as a painter, and got to meet in West Cork. He has helped me greatly in my art career.”

Following graduation, Diarmuid’s classmate, Donagh Carey, was “a powerhouse as an organiser of group exhibitions for the class. He was great at getting spaces such as the O Drisceoil building and the Old Bottling plant and clearing them, ready for exhibitions, often brushing floors and sticking labels to walls minutes before the exhibition opened. To show in these artist-run exhibitions was great when we didn’t have a gallery to show in.”

The artist-run Blue House Gallery in Schull has now adopted Diarmuid as one of their own and he exhibits there regularly: “I have made lasting friendships through the existence of this gallery.”

In 2015 he also started showing in the Taylor Galleries in Dublin and continues to do so. “It’s a really well-established family run gallery and they don’t seem to mind the Cork accent, so I’m happy there.”

Diarmuid believes that cultivating a collector base is an organic thing, “Like friendships it develops over time and at a natural pace. I find that people don’t just buy or collect art, they buy into your story or the idea behind the art. It has to resonate with the viewer. I have paintings myself from many artists and when I look at them I don’t just see the painting, I also see the artist behind the painting. I do have some collectors to whom I’m grateful for buying more than one of my paintings.”

2022 has been busy so far for this artist; as well as being invited to show at the West Cork Creates Annual exhibition and Taylor Galleries summer show, he was selected for ‘Generation 2022’ in the Butler Gallery and was part of the Boyle Arts Festival.

“The greatest highlight though is just to be able to continue creating works, meeting new artists, curators and gallery owners and having people see my work and do me the honour of buying it. It’s a privilege to be an artist.

Capturing nature as it moves back in

Fri Aug 5 , 2022
Best known for her sea and landscape inspired paintings, Jo Ashby creates from her home on Sherkin Island. Influenced by the patterns and rhythms in nature on this small and beautiful island, Jo’s work evokes the surface movement of water; the play of light on land and water – where land […] 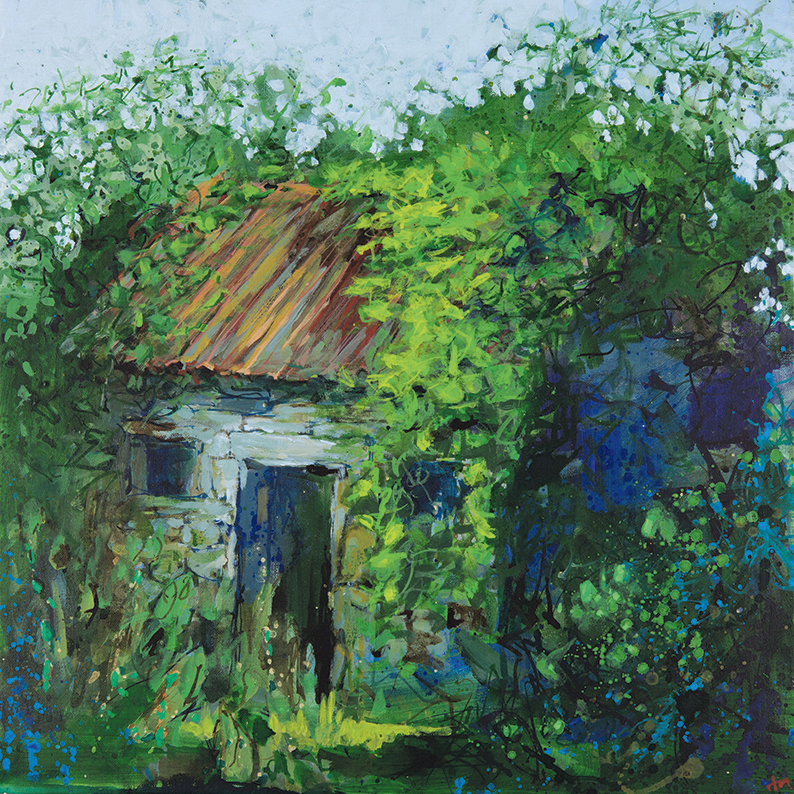