Best known for her sea and landscape inspired paintings, Jo Ashby creates from her home on Sherkin Island. Influenced by the patterns and rhythms in nature on this small and beautiful island, Jo’s work evokes the surface movement of water; the play of light on land and water – where land meets water and both meet the sky; and the actual patterns nature creates in flora and geology. She achieves this by painting in acrylics using a technique involving many layers of glazes. The paint, when applied to her canvas, creates a wonderful depth but also gives a suggestion of what lies beneath.

“This process would be too slow in oils,” says Jo, who also explains how she likes to work out ideas using mixed media including collage, a range of drawing materials and paint, thus creating layers with small areas of focus and other areas of ambiguity and suggestion.

“When I feel overwhelmed by everything happening in the world I can look up to the sky and see clouds passing overhead or walk to the beach and watch as the tide comes in and goes out…And this will continue, whatever we silly humans are doing,” she says passionately. “Nature will persist and I love to see as it adapts and reclaims from us with quiet and inexorable determination…”

While she does paint other subject matter aside from the sea; water features prominently in her work. She explains the background behind her most recent project, which celebrates walks along the river in Glengariff Woods and along the River Ouvane.

“This developed from a project based on walks to the beaches on Sherkin. Walks were so crucial for so many of us during the pandemic,” says Jo. “They became very important in themselves, not just as a means to reach an end point. I found myself celebrating and more acutely observing features along my walks and wanted to record these to remember how extremely lucky we were to be in this glorious environment in such a globally challenging time.”

The summer months are always busy for Jo creating for exhibitions across West Cork and for her Open Studio on Sherkin. For the upcoming West Cork Creates exhibition ‘Folk’ in Skibbereen, Jo explains her influences behind this year’s submission.

“I have always been drawn to the poignancy of the ruined and long empty homes scattered throughout the Irish landscape. In the past, I have used soot from the chimneys as part of drawings, thinking about the mothers who cooked endlessly over open fires to feed their children. My initial ideas for ‘Folk’ were to re-visit this theme, but I suddenly decided to look at these places differently and explore how nature re-absorbs them and re-claims any mark we try to make on the land.

“Although there is still a huge sadness and poignancy hanging over each piece, as these homes seem to be waiting for their human families to return, they are deliberately very colourful and illustrative in an attempt to celebrate nature’s endurance. A tricky balance to achieve.”

Art is in Jo’s blood; both her parents were artists – so it was no surprise that she went on to train formally as an artist. She studied at the Bournville School of Art in Birmingham before going on to complete her degree at one of the UK’s leading art schools, the Ruskin School of Drawing and Fine Art – the University of Oxford’s Fine Art department. Her post-graduate studies were at Goldsmith’s College in London, where she continued her practice but also trained to be an art teacher.

She first came to Sherkin in the 1990s with her partner, whose family hail from Skibbereen. For a number of years the couple lived between the UK and West Cork and the old girl’s school on Sherkin is now their permanent home. After retiring from her career in education, Jo has been painting full-time since 2013.

Sherkin is an artist’s haven with exhibitions running throughout the summer in the Sherkin Community Hall. “I exhibit with Robbie Murphy, who is an amazing photographer. We find that our work sits well together and we enjoy putting the show together,” says Jo. Their exhibition this year runs from August 12-21. Several of the island’s creatives also open their studios during July and August, welcoming visitors to come in to their work spaces.

With self-doubt a common scourge for so many artists, including Jo, being elected to be a member of the Royal Birmingham Society of Artists in her native city was a huge privilege and boost to her confidence. Of course it’s always a delight when any gallery or client approaches an artist asking for work. “That is what it is all about, really – connecting with one’s audience and knowing that one’s work has generated a positive emotional response,” says Jo.

“I think that the main advice for any emerging artist would be the words my father said to me. ‘Be true to yourself. Plough your own furrow, but never stop being open to ideas’, she imparts.

Jo is already planning for Art Source in Dublin in November and has several commissions to work on in the autumn, when she will also be working towards exhibitions in West Cork and beyond planned for 2023/2024. She is also looking forward to an upcoming artist residency in the New Year, which will see her back at the Tyrone Guthrie Centre in Annaghmakerrig to spend some focused time in the studio away from everyone and everything.

Fri Aug 5 , 2022
Angela Brady wears many creative hats, all shapes and sizes – architect, fused glass maker, broadcaster, curator, champion of craft and design in West Cork. The co-founder of Brady Mallalieu Architects based in London, Angela’s side hustle as a creative glass maker is rooted in West Cork, where she enjoys […] 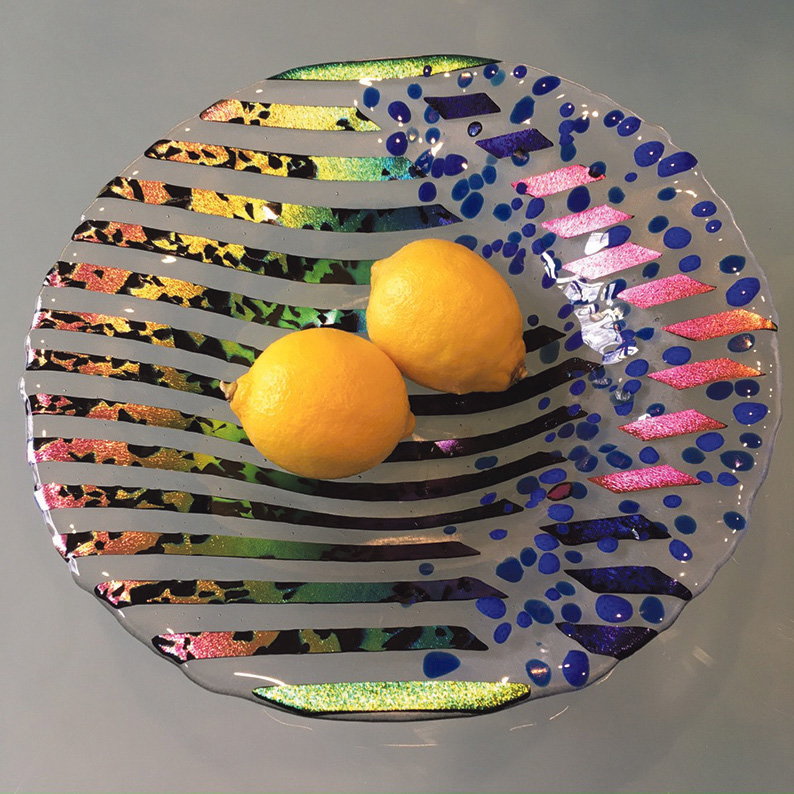