“Heir Island had no choice but to become home,” shares painter and printmaker Christine Thery with Mary O’Brien, recalling when she first set foot on the small island off West Cork. It was to be another five years after sailing to the Caribbean and US before Christine and her husband cast anchor again at Heir; this time purchasing the two acres they had originally seen. “In many ways it simply made me feel at home,” she explains. Christine was born and raised on Hong Kong island and Heir brought back memories of other small islands she had lived on in the South China sea.

Christine is modest when talking about her work. “I have had great success being bad at any job I did so stuck to the freelance world of first black and white photography then printmaking, mostly etching then painting.”

Although she attended art school for four years, where her main subject was sculpture, a formal education carries no weight with her. “Like most people I know who did the same, I can’t say there was any training involved, even if we did all get degrees at the end. Most people who go to art school either give up art when they leave or train themselves as hard as they can for the rest of their lives.”

She admires work that is honest and not a victim of fashion and says her own influences are ever-changing. “I am inspired by what I see around me every day. The lives of people living and working the land without the knowledge any more than the birds have that they are part of it inspire me; but sadly those people are vanishing with the animals and insects around them.”

“The subjects that most interest me are those I paint, self sufficiency, independence, sustainability, protection of the world around us, if not the bigger world, then the small section of it that we can look after.”

Working mostly in oil paint on canvas, Christine also does a lot of sketching with charcoal and pastel and makes sculptures using found objects.

Not one to mince words, she says she is not keen on conveying a message through her artwork. “It seems hard enough to understand your own work without turning it into a message at the same time.”

Christine is of mixed Russian, French and Welsh descent. Her mother was Russian, born in China, and was a refugee in Shanghai at the end of the 1940s where she met Christine’s father. They married in Shanghai Cathedral a month after meeting. Christine’s father, who worked for BOAC at the time, the British state-owned airline, had flown into Shanghai to help get refugees out during the Communist takeover. He was born in Canada to a German/French father and a Welsh mother.

After attending art college in the UK, Christine returned to Hong Kong where she lived in traditional villages on the outer islands.

While earning her income as an illustrator, as well as a freelance photographer travelling in SE Asia on assignments, she also became part of a development project on one of the islands, growing traditional vegetables organically, helping the last rice farmers to improve their soil and broaden the markets for their produce. During this time she sketched, photographed and painted the day to day life in the village and is still developing some of that material now.

Living aboard a yacht with her husband sometime later, she worked on a small etching press and did illustration work for a yachting magazine in the UK, sending it back from ports along their route. She continued her etching work ashore when the couple moved into a house for two Maine winters.

In the early days of living on Heir Island, Christine concentrated mainly on printmaking while cultivating vegetables and taking care of chickens and ducks. Later when oil painting took hold of her, she began having regular summer exhibitions in The Gate gallery (later the Morris gallery) in Skibbereen. Unfortunately it was at the expense of her garden, as Spring was suddenly too busy a time in the studio to devote precious hours to food growing.

Christine views herself as quite a traditional artist. ‘I love paint itself and, although I do like a lot of abstract painting, I can only really paint pictures myself that have some sort of a story, even if that is only known to me.”

Each piece of her work has a story behind it and many of the tales are woven with threads of Hong Kong and West Cork. “The similarities between all people who live and work on the land whether in China or Ireland or anywhere in between really fascinates me,” she explains. “I plan a show of my Hong Kong and Ireland paintings all shown together one day so others can judge that for themselves.” This show was due to happen last May in Cheltenham. For now the paintings are still on Heir Island!

For this year’s West Cork Creates ‘Home Ground’ exhibition, Christine has painted the wild skies over her favourite part of the island, the western end across the bridge. “They were skies I saw, as I walked this winter and spring on the island that is vanishing, as it becomes depopulated of residents and becomes a holiday playground,” she says sadly, admitting that, as a result of this changing face of the island, she and her husband have made the difficult decision to move to live fulltime on the mainland (although Christine will keep her artist’s studio on Heir). “Most of the houses in my paintings are homes no longer, but empty all winter under the huge sky,” she shares. “Barely a thin grey whisp of smoke to fight off the massive weather.”

For the exhibition, Christine also painted a series of imagined women in their imaginative kitchens, painted in the colours she has seen in many old houses and ruins on the nearby islands and mainland.

Although it can be a challenge getting some of her bigger paintings off the island, Christine says the sense of thrill and surprise when someone wants to buy one of her paintings is worth the effort.

“I should do more to cultivate a collector base but am a bit allergic to social media, so rely on my past and present exposure in galleries,” she shares. “Like a lot of other people who paint or pot or sculpt I don’t like to self publicise, hate exhibitions if I have to be at them, and just want to work away and have someone come and collect finished paintings and sell them for me. A vain dream unfortunately!”

Christine loves being in her studio but, after a busy day painting, she relishes the stillness that comes with sitting down in the evening with a glass of wine while the sunset blazes in through the garden doors. The art of stillness has always been a part of island life.

Mon Aug 9 , 2021
Dividing her time between London and her studio in Leap where she works obsessively when she’s in Ireland, ceramicist Kathleen Standen looks to the ever-changing patterns of weather in the South West, together with such natural elements as rock strata, moving and still water, lichen, wild flowers and the fishing […] 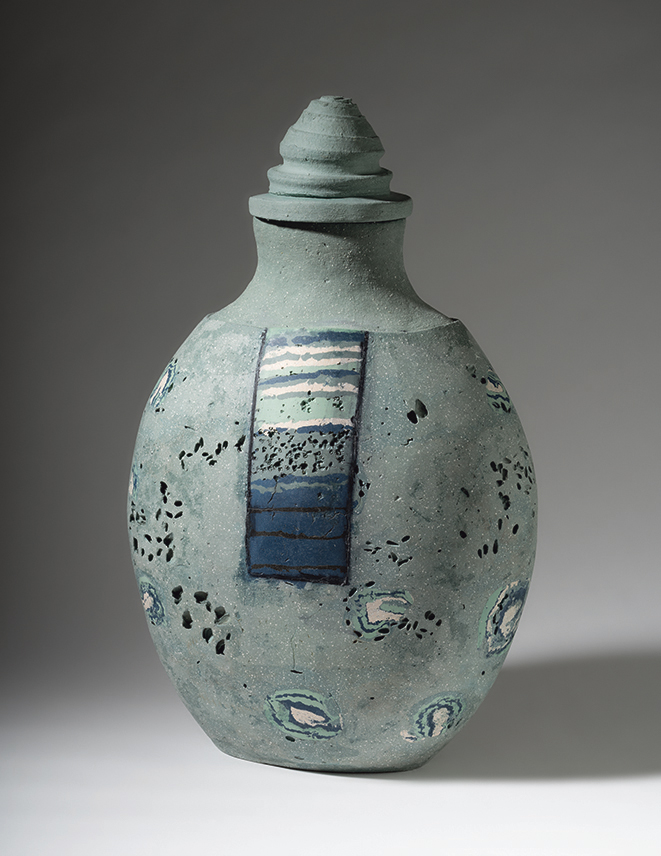