Andrea Carter is a solicitor and barrister… As real as they come! Or rather, she used to be in the business of law. And in some sense, she still is, albeit with more than a tinge of fantasy. Ms. Carter has become a successful crime writer. She has written five novels so far, with more on the way. “I practised as a barrister until 2013. When I got my publishing contract I took a bit of time out of the Bar, as I then had to write a book a year. With each book I kept extending my leave of absence,” she says with a broad smile on Zoom. There is every likelihood that she will not need to go back to her actual practice, for she is a bestselling author on Amazon in the US, having made No. 1 at some stage. “I haven’t made the bestsellers’ chart in Ireland; that’s still to come.”

Her books will also be adapted for television with filming due to start next summer.

Having grown up in Co Laois, Carter moved to Dublin to study Law at Trinity and then set up ‘the most northerly solicitor’s practice’ in Inishowen, Ireland’s largest peninsula, which then became the (perfect) backdrop for her ‘Inishowen Mysteries’ series. The protagonist of all the books is Benedicta ‘Ben’ O’Keeffe. Also a solicitor coincidentally, albeit operating from the fictitious town of Glendara (Donegal) although some of the other places do exist. Both Derry and Malin Head are within easy driving distance. Thanks to her position as a relative outsider, who knows many secrets and is likeable enough for people to confide in her, she often manages to – eventually – piece two and two together following a murder, a disappearance, a body in the snow, a case of arson, or a dead person falling on the vet’s jeep.

Described as a modern day Agatha Christie in the Irish Examiner and elsewhere, Carter uses the backdrop of a pretty normal (pre-Covid) small Irish town to great effect. You’re ‘there’ with Ben in someone’s welcoming living room, on Sliabh Sneacht, on the scenic Five Fingers Strand, in a boatshed surrounded by scrubby bushes that is about to explode, or simply at home with unreliable tomcat, Guinness. And all the while you’re wondering ‘what lies beneath?’. Who’s lying? What is her love interest, Sergeant Molloy, hiding from her? Who is the mother of her clients’ adopted son? And what is going on with that woman’s marriage? Carter plants all these leads (some of them false) so you ‘have’ to keep turning those pages.

She says it just happens. “I’m not a plotter; I drive by the seat of my pants. Often, I reach the third draft and I still don’t know who the killer is. I’ve tried to plot in detail but it doesn’t work for me. I get bored. I like to discover my book the way the reader discovers it.”

“A beguiling heroine – clever sympathetic and bearing a weight of guilt…Carter…will go far.” (The Times)

Andrea is the next guest at DeBarra’s Spoken Word, a monthly event that used to be at the back of the well-known Clonakilty pub but is continuing on Zoom for now. An engaging speaker, she will be reading from and talking about her books and answering questions on the night of June 16, followed as ever by an open mic with guests from around the world who read samples of their poetry or prose with the occasional song thrown in.

An interview with Andrea Carter about her books, how she got published, and what her method is can be found on YouTube.

The session starts at 8:30pm. Go to the event at the DeBarra’s Spoken Word page just before it starts to find the zoom link or send an email to debarrasspokenword@gmail.com to be added to the mailing list.

Tue Jun 8 , 2021
The team at Clonakilty Community Garden has expressed its gratitude to Mike Deasy and his team of Tidy Towns’ volunteers for their fantastic support and hard work recently in helping prepare the garden for a visit from RTE’s ‘The Today Show. On this occasion, a simple request for bark mulch […] 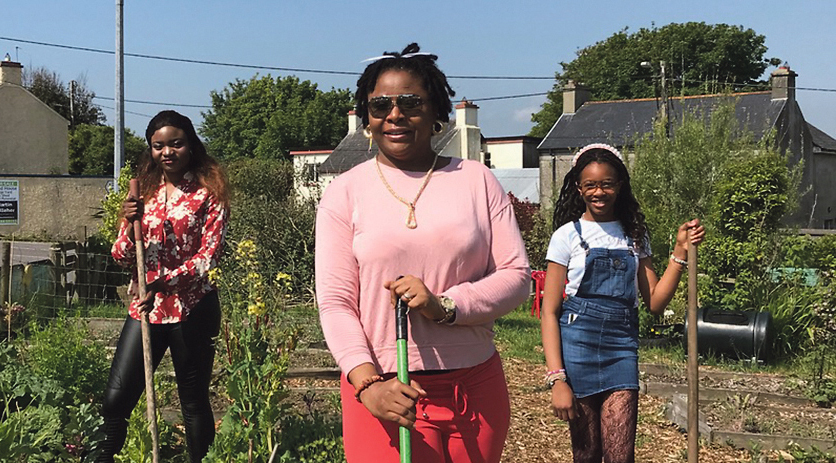