Two West Cork paramedics, James Hennessy and Olive Murphy, who responded to an emergency call out to an elderly patient in need of oxygen during Storm Ophelia, were honoured with a Certificate of Bravery at the National Bravery Awards on October 18.

The Bravery awards were set up in 1947 to recognise those who risked their lives to save others and are administered by Comhairle na Míre Gaile – the Deeds of Bravery Council – which is chaired by Ceann Comhairle Seán Ó Fearghaíl TD.

Twenty National Bravery Awards, including one posthumous honour, were presented at a ceremony at Farmleigh House in the Phoenix Park, Dublin.

Paramedic James Hennessy and Advanced Paramedic Olive Murphy were on duty at Clonakilty Ambulance Station in West Cork on October 16, 2017, during the Status Red weather warning for Storm Ophelia.

They received an emergency call to an area near Ballineen at 12.52pm. The call was to a woman in her 90s. Her mains-powered oxygen supply had stopped working due to a power cut. The patient had no oxygen and no alternative plan of care for a power interruption. The crew responded immediately.

The trip to Ballineen would normally have taken them between 13 and 19 minutes but fallen trees blocked many of their routes. Alternative routes, though passable, were in a dangerous condition. On more than one occasion the paramedics had to leave the safety of their ambulance, endangering themselves, and use a hacksaw to clear a path. After 45 minutes they finally reached the patient who was safely removed to the ambulance and brought to Bantry General Hospital, arriving at 3pm.

For their actions, James Hennessy and Olive Murphy were each awarded a Certificate of Bravery.

Tue Nov 5 , 2019
Cork county mayor Cllr. Christopher O’Sullivan and Clonakilty mayor Michael O’Neill have jointly launched an ambitious plan to plant a huge amount of trees around Clonakilty with the guidance of tree expert István Márkuly. They are appealing for people to come to an information evening on November 12 at 8.30pm […] 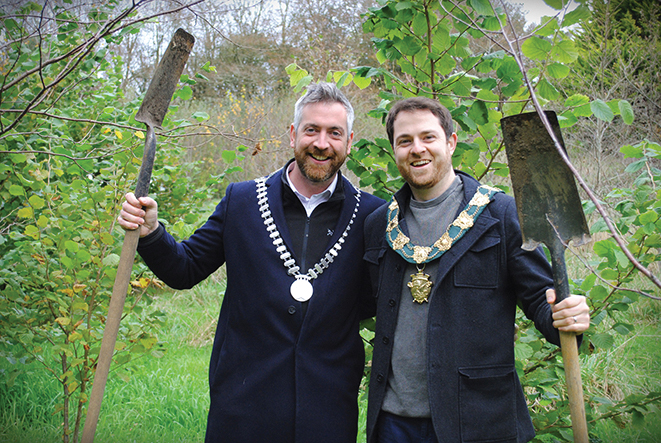