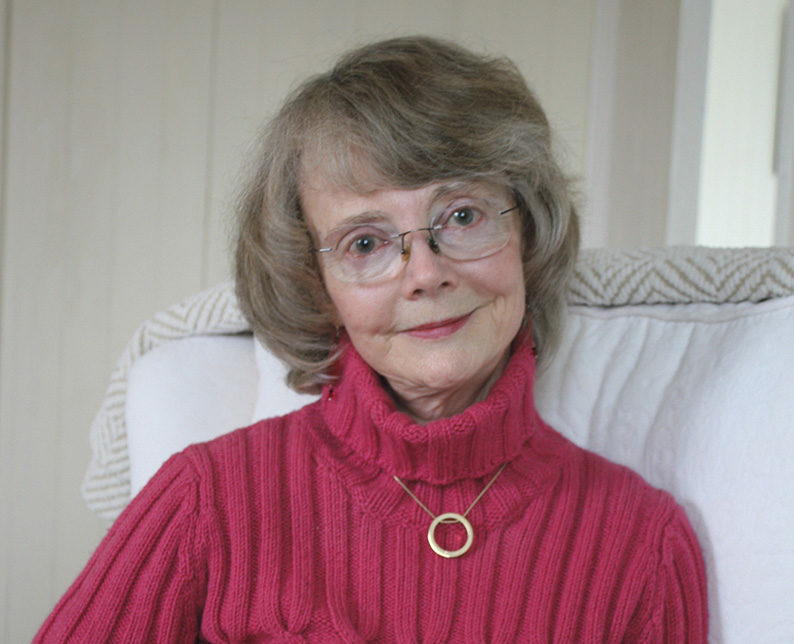 Kathleen Kelley Reardon has just published her second crime mystery novel, ‘Damned If She Does’; described by Kirkus Reviews as “informed and searing” and a “page-turning success”. The first book in the trilogy, ‘Shadow Campus’, made the top of Amazon’s Top New Releases and was described by Forbes as a “fast-paced” and “masterful” debut.

Kathleen was recently invited to become a member of the International Women’s Forum – Ireland chapter, joining 100 women in Ireland and 7000 around the world, all accomplished leaders in their fields. “One of our goals is to foster leadership in young women and also to help each other have an influence in areas that are important, particularly to women,” says Kathleen.

The Irish-American professor emerita, author and artist has lived in Schull for most of twenty years with her three children and husband, Chris, who designed the cover of her latest novel.

She talks to Mary O’Brien about her new book, her journey into writing fiction, and living with Parkinson’s Disease.

Author of 10 nonfiction books, Kathleen was the first woman to rise through the ranks to tenure and then promotion to full professor at the USC Marshall School of Business. She was a featured blogger at The Huffington Post from 2005 to 2016, and a writer at HBR online, Big Think and The Conversation.

Kathleen’s work includes influencing the careers of women through her research and writing, such as the Harvard Business Review case reprint bestseller, ‘The Memo Every Woman Keeps in Her Desk’. This led to her book, ‘They Don’t Get It, Do They?  Communication in the Workplace — Closing the Gap Between Women and Men’, which explored how women and men don’t ‘get it’ when conversing and working with each other. It was recently rereleased as an e-book.

Although her accolades are many, Kathleen feels her greatest sense of accomplishment derives from coming up with the concept of creating university-based academies to prepare foster children for college (of whom only approximately three per cent graduate). This has already resulted in the creation of a number of such academies at major universities in the US and UK, and Kathleen’s hope is that it will be introduced in Ireland in the near future. At First Star, the nonprofit that initiates and develops those academies, she was a co-founding board member and is its Distinguished Research Fellow. She also received the University of Connecticut Alumni Association 2013 Humanitarian Award. “It’s something that is making a difference in the lives of children,” says Kathleen. At most of the academies at least 90 per cent of graduates are going on to higher education.

“My path has been a meandering one,” she explains. Of her journey into writing fiction she says “Years ago I was an English teacher in secondary school, so I always had a love of literature. I’d like to say I always had a love of reading but as a child I was not a voracious reader. I read what I found interesting and it was my father in particular who kept nudging me. He would ask me to take a book and read it aloud so he could hear me reading. At first I was kind of annoyed but eventually it drew me in.”

Fiction or non-fiction, everything Kathleen pens is related in some way to human relationships and communication.

In her latest book, ‘Damned If She Does’ – part of a trilogy, with the next book based in West Cork – young professor, Meg Doherty, has kept a dark secret. When she stumbles upon the viciously murdered colleague at the heart of that secret, she quickly becomes the primary suspect.

The primary characters in this novel and the first one are brother and sister,” explains Kathleen. They were initially estranged in the first novel, due to a significant falling out in the family early on.”

Kathleen’s primary areas of scholarly interest have been communication, persuasion, politics in the workplace, leadership, and negotiation.

She has taught negotiation, politics and leadership at The Irish Management Institute and also spent time at Trinity and UCD as a visiting professor.

One of her inspirations is Betty Friedan, author of the Feminine Mystique and one of the originators of the modern women’s movement and the national organisation for women. Kathleen and Betty taught leadership diversity together. “Just being around Betty, you couldn’t help but learn how to influence change,” says Kathleen. “She was an inspiration.”

A mother-of-three, Kathleen successfully battled breast cancer in her early 30s and was later diagnosed with Parkinson’s Disease, a condition that eventually prevented her from teaching.

“I lost a year and a half to misdiagnosis of my breast cancer so to be here at all is good fortune,” she remarks. Kathleen underwent radical radiation therapy, a clinical trial at the time. “That knocked me for a loop but I gradually got back on my feet. It is a distinct possibility that the onset of my Parkinson’s was related to that treatment,” says Kathleen, who used to work in preventative medicine. “Research indicates that these kinds of conditions, especially Parkinson’s, can be brought on by an insult to your system.

“I was trained to look at an illness objectively,” she continues. “My oncologist told me that I was treating breast cancer like a research project but that was my coping strategy.”

That same oncologist introduced Kathleen to Bernie Siegel, an American writer and retired paediatric surgeon, who writes on the relationship between the patient and the healing process. He is known for his bestselling book ‘Love, Medicine and Miracles.’ “I would say that Bernie changed my life,” admits Kathleen

“He was a surgeon working with cancer patients. He discovered that if you play music that people like or guided imagery meditation while patients are undergoing surgery, they recover more quickly. Fortunately I was blessed to be able to meet him at that time.”

Kathleen listens to Bernie’s medications every morning and evening as a way of pushing back the fatigue that Parkinson’s disease brings.

“It helps to clear my mind. I listen to Bernie before I paint. It gives me another three or four hours of being able to concentrate better,” she explains.

Asked about how she’s doing, Kathleen said, “I can’t complain but I can feel and see my Parkinson’s increasing. My balance is worse, I shake more. It’s a normal progression. Meditation and exercise are a few of the things that help.

“I feel that if I can understand my illness, then I can do something about it. That’s really important to me,” says Kathleen.

Exercise is very important in the treatment of Parkinson’s. “There are a set of exercises offered in Bantry Hospital for patients with Parkinson’s, which were a life-changer for me. I went from being curled up and not looking too good to being much better,” says Kathleen.

There is a brighter side to Parkinson’s. Research has shown that people diagnosed with the condition can experience more creativity. Kathleen has become a painter. Ever since I’ve had Parkinson’s, I’ve been more aware of colour,” she says.

Every morning, Kathleen gets up and determines what type of day it will be based on how she is feeling.

“I do have bad days. On a bad day, I’ve begun to try to teach myself that it’s not really a bad day, just not really a good one. I don’t expect to be able to paint a big oil painting or write on a day like that. She just published an article on Arianna Huffington’s Thrive Global website on just this type of decision and how it can alleviate stress to recognise that not all days are meant for big things.

“There are peaks, valleys and plateaus in life; it’s not always smooth, especially when there are tunnels,” says Kathleen smiling. “I like to say to my students that I’ve seen the light after being in a number of tunnels. I feel fortunate to have seen it, that’s what keeps me going and it will keep them going too.”

‘Damned If She Does’ will be launched at Anna B’s Bookshop in Schull on Saturday, March 7 at 3pm. All welcome.

Mon Mar 9 , 2020
From her home overlooking Long Strand near Clonakilty in West Cork, Claire Marie Barton gives sound healing sessions and offers private retreats. She shares some of the special qualities of sound healing and explains what drew her to this experiential healing therapy. Singing has always been Claire’s passion and, although she veered […] 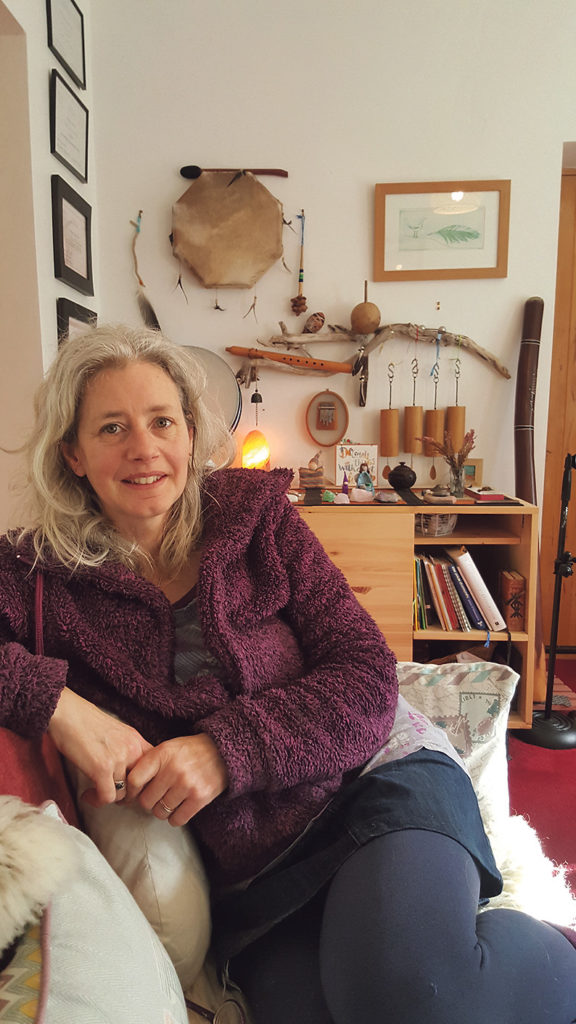