Cork County Mayor, Cllr Patrick Gerard Murphy had a very busy and exhilarating bank holiday weekend when he and a group of 18 other people from Eyeries took to the skies to do a tandem skydive in aid of local charities. Taking part in this fundraiser was particularly challenging for Mayor Murphy, who has been a wheelchair user since 1993 as a result of a car accident.

Not one to let his disability hold him back, Mayor Murphy met with a number of people from across Eyeries community groups earlier this year to come up with fundraising ideas to improve the playground in Eyeries, to help the local Tidy Towns organisation and to support the annual Eyeries Festival. They also wanted to raise money for Cancer Connect, the organisation that helps West Cork cancer patients travel to Cork for their treatment, a charity that is very close to the Mayor’s heart.

“It’s a really valuable service. My own father benefitted enormously from it before he passed away,” said the Mayor. ‘The idea of doing a tandem skydive was touted and I decided to go for it.  I knew it wouldn’t be straightforward but not impossible either and I wanted to show that it could be done.”

In order to be permitted to carry out the sky dive, the Mayor had to firstly obtain a letter from his doctor to confirm that he was in good health. Then he asked the Irish Parachute Club in County Offaly to find a parachuter who would be his partner for the tandem skydive. Experienced parachutist Tony Donnelly took on the responsibility of bringing the Mayor safely to ground.

On Sunday May 5, the group from Eyeries headed to Offaly. Mayor Murphy was a member of the first group to go up in the plane and the first to skydive.

“Sitting at the edge of the plane just before jumping was a feeling I can’t describe, somewhere between fear and excitement but absolutely amazing. We tumbled out the door and somersaulted a few times, which was the worst bit, as I was completely disoriented. But once I got my bearings, I was grand and I really enjoyed it. It was so peaceful up there, incredibly quiet and an experience I will never forget,” he said.

The landing was carefully planned and both Mayor Murphy and Tony Donnelly landed safely. “I would recommend it to anyone, a day that will stay with me forever,” Mayor Murphy said.

Visit the Mayor’s SkyDive Go Fund Me page for details on how to support the chosen charities.

Tue Jun 4 , 2019
Mayor of the County of Cork, Cllr. Patrick Gerard Murphy has officially turned the sod on the new community hall in Whiddy Island marking the commencement of construction of the first ever community facility for the Island.  Development of the much-anticipated community hall will cost in the region of €340,000 […] 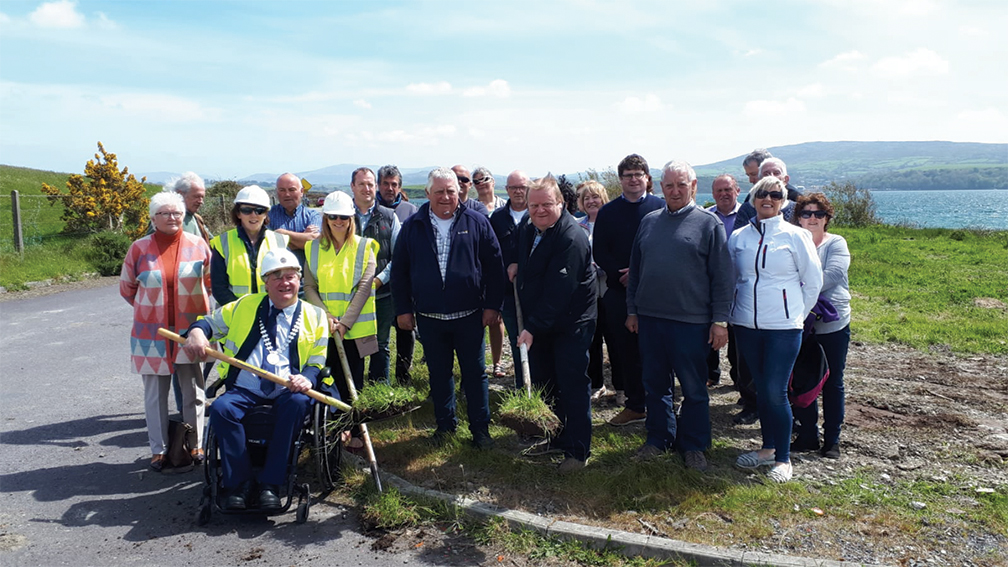