As the main base for the famed West Cork Flying Column, the area around Crossbarry was a hotbed of Republican activity in 1921. To deal with this, the British decided to converge on this small village near Innishannon and wipe out the Column. They hadn’t bargained on meeting with the might of General Tom Barry and over 100 Volunteer fighters. Pauline Murphy tells us how a planned IRA ambush turned into a decisive battle in the War of Independence.

British military vehicles frequently travelled the back road from Bandon to Cork and on March 19, 1921 IRA General Tom Barry had a plan to ambush a number of them at Crossbarry. However, the plan changed quickly when it became apparent that the British knew of the Flying Column’s presence in the area.

The Crown forces had beaten this intelligence out of an IRA prisoner captured at the Upton Ambush weeks earlier, and on that Saturday morning in March over 1,000 soldiers from the Essex Regiment encircled the area, intent on smashing the Republican resistance there.

Shortly after dawn on March 19, the first shots rang out at Forde’s farmhouse in Ballymurphy, near Crossbarry village, where Commandant Charlie Hurley was recovering from wounds received at Upton; he would be the first casualty of that fateful day.

Hurley, 28, a keen GAA lad and Gaelic League activist from Baurleigh, Kilbrittain, had worked as a clerk at Haulbowline Royal Navy Yard before he rejected a promotion to England and headed back to West Cork, where he joined the Irish Volunteers and Sinn Fein. He had become Commandant of the West Cork Brigade in August 1920 but was injured during the ill-fated Upton Ambush when a bullet entered his skull behind his right ear and exited through the left side of his face. It was a miracle he survived such an horrific injury but, with the aid of comrades, he was carried to the safehouse at Ballymurphy to recover.

When British lorries approached the farm Hurley rose from his sickbed and dashed downstairs, firing his revolver at the enemy as they burst through the door. He hit a Major Hallinan in the chest but the soldier was wearing steel body armour and survived.

As Hurley ran out the backdoor, soldiers entering the rear of the farmyard spotted him, took aim and fired. A bullet struck Hurley in the head, killing him instantly.

The sound of gunfire at Forde’s farm alerted the Flying Column that something was happening; then came waves of British soldiers across the fields whilst army lorries sped along the roads – the Battle of Crossbarry had begun.

As a lorry rattled towards the bridge near the crossroads in Crossbarry, a lucky shot from the gun of a Volunteer hit the machine gun atop it, rendering the weapon useless.

IRA Volunteer Edward White was in one of the lorries coming from the Bandon side of Crossbarry. White was being taken to Cork as a prisoner following his capture in Kilpatrick the previous day. As a hail of bullets rained down on the vehicle, White was able to escape while his captors were otherwise occupied returning fire. He scrambled up the hillside to join his comrades.

A soldier spotted sharp-shooting Beara native Patrick O’Sullivan behind a ditch overlooking the road and flung a bomb in his direction. The bomb landed next to O’Sullivan who calmly picked it up and flung it back! It landed on the roof of a lorry and exploded.

The air was not only full of the sound of bombs and gunfire but also the strains of warpipes, which drifted across the Crossbarry battlefield. Flor Begley was an IRA Volunteer and an accomplished pipe player who was asked by General Barry to bring his instrument to Crossbarry and position himself in Harold’s farmyard, adjacent to where the action would play out.

As the battle raged Begley played martial airs on his warpipes to give the IRA a morale boost…and give the enemy the impression they were battling a large army battalion rather than just 100 volunteers!

General Barry had split his men into seven sections, labeled Sections A to G. Section E, commanded by Denis Lordan of Kinsale, covered the area where the monument now stands at Crossbarry and was the most exposed to enemy fire, resulting in many injuries, some fatal. Dan Corcoran and Jim Crowley were two Section E members who were seriously injured, Crowley had his kneecap smashed by a bullet, an injury that left him crippled for the rest of his life.

Apart from Charlie Hurley, there were three more IRA fatalities at the Battle of Crossbarry.

Jeremiah O’Leary from Leap was a young Volunteer with the Corran Company. He was struck down by machine gunfire while fighting on the exposed hillside of section E.

Peter ‘Scottie’ Monahan was laying landmines at Crossbarry when he was shot whilst tending to one that had failed to explode near the bridge at the crossroads. As Monahan fell another bullet found its target, which made him roll into the wires of the bomb and become entangled. As more bullets hit, Monahan’s last act was to detonate his bomb.

Monahan had joined the Kilbrittain Company in November 1920 after deserting the British Army where he had been a Sargeant with the Cameron Highlanders stationed in Cobh. At first he was viewed with suspicion and held prisoner by the Ballinadee Company but, when they realised he was genuine and had engineering skills, they made him chief bomb-maker of the West Cork Brigade.

Cornelius Daly was 22-years-old and from Carrig, Ballinascarthy. He was a member of the Clogagh Company and the third IRA Volunteer to fall in action on the Crossbarry battlefield.

The bodies of the fallen IRA Volunteers were taken to Bandon by the military, where they were later claimed by members of Cumann na mBan, who took care of funerals. Under the cover of darkness Charlie Hurley was buried with military honours at Clogagh Graveyard, with General Tom Barry delivering an oration.

Peter Monahan, Cornelius Daly and Jeremiah O’Leary were buried in the Republican Plot in Bandon. During their funerals the Crown forces harassed mourners and arrested all males who attended.

The casualty list on the other side however was much larger.

Lieutenant Geoffrey Hotblack was a well-known (and well-hated) figure in West Cork where his ruthless streak did not endear him to the people. Hotblack was shot at Crossbarry and died two days later.

The other British fatalities were: Sergeant Edward Watts from London. He was a WWI veteran and his body was not found until two days after the battle; Private Joseph Crafer from London and Private Harold Baker from Liverpool; Private William Grey and driver Cyril Martin, who were both part of the Royal Army Service Corps attached to the Essex Regiment; Private Sidney Cawley, who died the day after the Battle from gunshot wounds; Private William Wilkins from Salford was a WWI veteran, so too was Private Stanley Steward; Lieutenant Alfred Tower was wounded and died days later.

The only RIC casualty was Constable Arthur Kenwood from London. He joined the RIC Auxiliary Division in 1920 and was driving one of the lorries when he was killed.

In the days after the Battle of Crossbarry, Crown forces flooded into the area to carry out brutal reprisals. They raided homes, burned sheds, destroyed crops and farm equipment. Among those targeted were the O’Mahoney’s in Belrose, O’Leary’s in Ballyhandle, Hartnetts in Killeens and Kellehers at Crow Hill, just to name a few.

Many of those fighting in British uniform at Crossbarry were hardened veterans of WWI; they were experienced and had far more firepower than the IRA. The IRA Volunteers had neither battlefield experience nor equipment; they were labourers, farmer’s sons, clerks and shopkeepers yet they overcame the might of the British forces.

After the Kilmichael Ambush in November 1920, the Battle of Crossbarry four months later proved decisive in the fight for independence. Those two West Cork engagements undoubtedly cracked the hardened British response to Ireland’s will. You could say, ‘the Boys of Kimichael bruised them but the Boys of Crossbarry broke them’.

Tue Mar 9 , 2021
‘The great appear great, because we are on our knees: Let us rise.’ – Jim Larkin, Union leader, and Founder of the Irish Labour Party.  When any union goes on strike, be they nurses, rail workers, teachers, retail employees, the media usually likes to take to the streets to get a […] 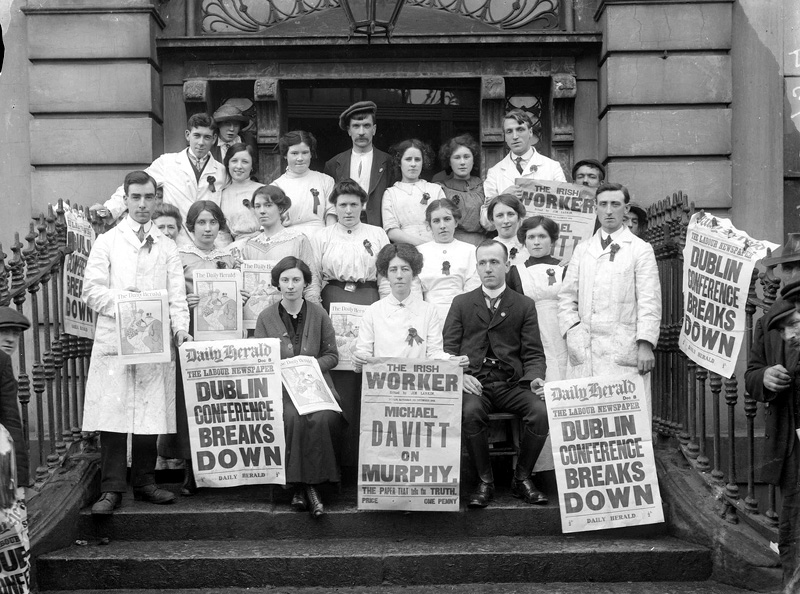