Although they grew up only 15 minutes down the road from each other, Jason O’Sullivan, Durrus and Orianna O’Shea, Bantry met through friends in Perth, Western Australia. They first set eyes on each other at an Irish race day. Jason manages the gym and leisure centre at The Maritime Hotel, Bantry and Orianna is a hairstylist in Aisling’s Hair Studio, Skibbereen. Together for five years, the couple tied the knot on July 20, 2019 at the Church of the Sacred Heart, Durrus followed by a reception at The Maritime Hotel.

Tell us about the proposal?

Orianna: We went on a family holiday to Orlando, Florida. I had told Jason I wanted to see the Disneyland firework display. The only show was the last night of our holiday so Jason booked dinner for us at the Disney Polynesian resort. Halfway through the dinner and dance show Jason said that if we stood out by the lake just outside the restaurant we would be able to see the fireworks. When the fireworks started Jason handed me a picture of our little boy Jayden holding a heart that said “Mommy will you marry Daddy?” When I turned around Jason was down on one knee. We celebrated that night with my family who were on holiday with us.

Why did you choose The Maritime for your wedding?

The Maritime is a beautiful venue and so central for both our families. We had been at the hotel many times for dinner and it was always fantastic. We went to a wedding fair at the hotel and they had it set up so beautifully, we booked there and then.

Most enjoyable and most stressful parts of the wedding planning experience?

In all honesty both Jason and I took a more relaxed approach to the wedding planning; we started planning almost two years in advance, so it gave us plenty of time. We got as much done as early as we could, so thankfully it was all mostly enjoyable.

Did you ‘lock horns’ on any of the wedding details?

The only single thing we could not agree on was whether to have four or five courses for the meal! I wanted to keep the show moving and get to the party as soon as possible; Jason wanted as much food as possible on the menu – I won!

Did your other half have much input into the planning?

Fortunately, Jason was very involved in the wedding plans. Him working in the hotel was obviously a huge help. We were very much 50/50 in the planning.

What was your favourite part of the day?

Sitting at the top table, looking at all of our nearest and dearest who had come out to celebrate such a special day with us, was one of the nicest feelings. Also we had an amazing band, The Ian Henricks Band. They kept the dance floor full the entire night. We also had Darren from Sax Appeal come and play the saxophone alongside the DJ – he had confetti cannons that he set off close to the end and it was amazing! It was my dad’s birthday on the day of the wedding also, so we had a cake brought out to him while the whole room sang him Happy Birthday

Where did you go on honeymoon?

We went to Torremolinos, in the Costa Del Sol. It was beautiful.

What are you hopes for the future?

We are lucky enough to already have three beautiful children between us, Jake, Jayden and Indie. For right now our hopes are to enjoy every minute we can with them.

Advice/tips for other couples about to tie the knot?

I know at times it can be hard but try to stay as calm as possible in the lead up and especially on the day. We had a few people tell us that they had a lovely day on the day of their wedding but it was a bit stressful so they really relaxed and enjoyed day two. That seemed ludicrous to both Jason and I, after many many months of planning and it costing us a pretty penny! We both wanted to enjoy every single minute, to be able to look back and say we had the best day ever and we can honestly say we did.

Our day: A proposal that stirred up a storm

Wed Sep 11 , 2019
Anne O’Hea from Clonakilty and Noel Murray from Templederry in Co Tipperary met at their friends’ wedding in Dunmore House Hotel. The couple, who have been seeing each other since December 2016, got married on May 10, 2019, in St Fachtna’s Church Rosscarbery, followed by a reception in Fernhill House […] 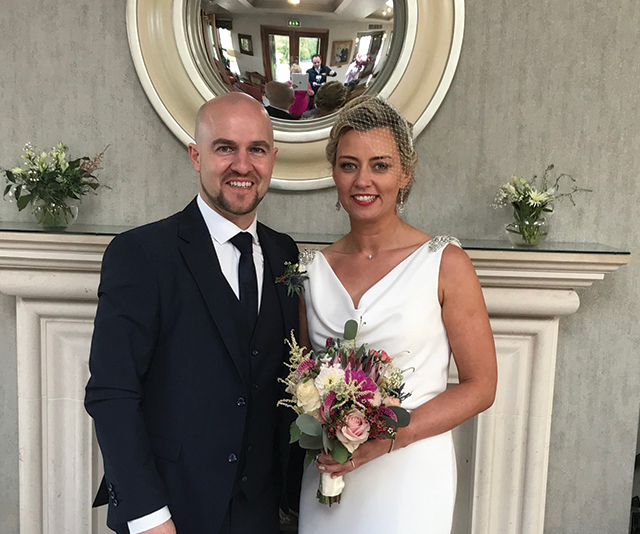