This month provides the second set of synopses given in alphabetical order, for my wife’s ancestral lines and what we have learned from atDNA matching. If you have DNA tested and related to any of these families, do get in touch and consider adding your DNA information to the project. My wife’s ancestry is genetically proven to her three-times great grandparents, which also reaches the boundary-defining available church records in County Cork. Her DNA can be matched against on most testing websites. This provides a solid and verifiable dataset for anyone finding a close match within this genealogical timeframe.

Since my article ‘A Good Story’ in the February 2022 edition of this paper, further research has revealed a little more about Thomas Good, current patriarch of my wife’s branch. His death was found in 1885 at the Incurable Home in Cork city where he was given “of Clonakilty” aged 85. This indicated that he was born around 1799/1800 if accurately recorded, although we still do not know who his parents were. His final resting place is an unmarked but documented grave in St Finbarr’s Cemetery, Cork. This matches up with the information that it was indeed his widowed daughter Anne Lane living near the Methodist church in Clon on the 1901/1911 census and that other family members used the same Incurable Home in their later lives.

It has also been confirmed that Thomas married Anne Cotter in November 1825 at Ballymoney (near Ballineen) and that he is recorded in Griffith’s valuation of 1852 as residing in property without land close to Castlefreke in the Milltown townland of Rathbarry, explaining his children being employees at nearby Castlefreke (as seamstress, shepherd and gamekeeper). The other Good in the village at the time is a farmer named James and it is unclear if he is a son or another relative. One of his sons also worked at Castlefreke. Descendants of the Goods have occupied the same house in Ballineen since the 1870s.

In terms of DNA matches, Thomas’s branch through several unconnected links points to the extensive Good families who lived around Kilshanning by Mallow in the C18th. Many of these moved and settled in and around Ballineen/Enniskean and Bandon. Anyone who has Good family ancestry in West Cork will know how many families are recorded and that too many couples have similar names. This means the quality of many family tree branches on websites such as Ancestry are unreliable due to rampant copying and loose interpretation of the available data. As Ancestry’s matching algorithms use all available data (whether the trees are right or wrong) it means many of the hints cannot be taken at face value.

Records around Kilshanning are gradually appearing online and it is hoped a candidate set of parents for Thomas will be found that ties the paper and DNA story together.

Lowneys of Beara, Clonakilty and Wexford

Lowney is a well-known business family in both Clonakilty and Wexford. They are the same genetic family. The wider family tree in both counties is proven by DNA.

Riobard O’Dwyer’s ‘Annals of Beara’ supports family legend: “The Lowney in Berehaven were originally O’Sullivans who came from beside the Laune River, Killorglin, Co. Kerry. They were called the Launeys after coming to Berehaven, and they eventually became known as the Lowneys. Four brothers came. One settled in Bunskellig, one in Bere Island, one in Clogheen, Garnish, and the fourth (a weaver) in Ard na Sciach, Filane, Castletownbere. Later, they spread out to Foromanes (Eyeries) and to Lickbarrahan (Cahermore), to Derrimihan (Castletownbere) etc.” – Annals of Beara, Vol. II, p. 280 (2009).

While there is no Lowney Y-DNA project (male and surname lineage), those who have tested fall into the same genetic group as the O’Sullivan study, supporting the oral history. What is missing in the story is the timing of their arrival in Beara. I have insufficient DNA data in my project to provide an estimate.

The O’Sullivan Bere clan fled, settling in the Laune valley, following the defeat of the Catholic Irish and their Spanish allies at the Battle of Kinsale by English Crown forces (October 1601 – January 1602). The return to Beara is assumed to have taken place sometime in the C18th. atDNA matching does suggest some connection between many of the surname on the peninsula, particularly between the group on Bere Island and my wife’s family from Filane (Ard na Sciach), east of Castletownbere, but it is apparent the connection is prior to the start of church records. With intermarriage between local families a high degree of endogamy (shared DNA from common ancestry) can make detailed interpretation difficult. The surname has variant spellings including Looney and M’Lawney (becoming Maloney in South Wales, for example). The sheer number of Lowney families in the Annals suggest the brothers must have returned in the earlier part of the C18th at the latest. Of course, they could have adopted the same name even though they were biologically different families entirely.

My wife’s branch moved out of the Beara peninsula in the late C19th and is still known locally in Clonakilty by the name Looney, even though spelling their names Lowney. For example, the 1911 census has the family clearly listed as Looney but the signature was Lowney. atDNA matches support the family origins in Filane. Interestingly, I have identified a particular DNA segment on chromosome 17 that points to this townland and is a marker for many matching descendants of Lowney, Sullivan and Sheehan who all lived there at the turn of the C19th. This is currently the only townland-specific marker identified in my research. The Lowney story is also supported by apparent pre-church record genetic connections to the group on Bere island (Rerrin village).

The current paper trail confirms the family patriarch as Timothy Lowney (c1799-1897) and his wife Mary Sullivan (1807-1878) who married in 1826, my wife’s three-times great grandparents. Their son John Lowney (1834-1916) and his wife, also a Mary Sullivan (1837-1929), married in 1860 and are my wife’s two-times great grandparents. Both families were given of ‘Ardnaskeagh’ on their marriage and both Timothy and John farmed Filane Upper.

John and Mary’s son John ‘Jack’ LOWNEY (1862-1940) was born in Scart on Beara and was the one who settled in Clonakilty, founding several businesses leading to the well-known family based in the town today. Jack married Ellen Sullivan (1860-1934) of Kilmore, Whiddy Island in 1890. Jack and Ellen’s son Patrick aka Josie Lowney (1891) is the one who moved away from Clon and became the patriarch of the family who are now well established commercially in Wexford town and beyond. There are proven DNA matches across the two sides of the family.

One of the challenges in DNA matching this family is the inevitable number of segments that must relate to deep Sullivan ancestry rather than recent generations. We have three generation of Lowney men (who are genetically Sullivans) marrying Sullivan women. The current size of the database is limited and I continue to seek descendants of both branches who are willing to share their DNA details to help resolve some of the uncertainties.

Dromdeegy is an area north of Dunmanway in Fanlobbus parish. The Manning surname can be associated with one belonging to English settlers, but as mentioned in last month’s article this family belongs to wider O’Brien Mongáin. This agnomen or regional clan name in its diminutive form means ‘hairy’ and can be found also as surnames Mangan and Mongan. Manning is an anglicised corruption and therefore not necessarily to be confused with English settlers, as indicated through connections with the Fitzpatricks of Derryduff (Rosscarbery). For this specific branch church records provide a difficult paper trail with connections only inferred by DNA, indicating a wider distribution for the use of O’Brien stretching from Rosscarbery to north of Dunmanway.

The current head of this Manning family (my wife’s three-times great grandfather) is Cornelius Manning, determined through church records and overseas descendant DNA matches to be from O’Brien. He was born before 1785 in West Cork to be aged about 25 upon marriage. Nothing is known about his actual age as it is not recorded, however he married Mary Carthy (McCarthy) on or before 1811. Cornelius is listed in the Tithe Applotment Book of 1826 at Dromdeegy and in Griffith’s Valuation of 1853 farming 51 acres at Dromdeegy. There are no further records for him.

Cornelius and Mary had several children which show a close relationship with a neighbouring Donovan family as well as the McCarthys. Mary Manning (c1812) of ‘Droumdega’ married Denis Donovan of the same place in 1832 Dunmanway; my wife’s two-times great grandparents and one half of a family story of two Manning sisters marrying Donovan brothers. Witnesses were Cornelius Manning and Timothy Donovan,  fathers to the couple. Denis and Mary Donovan farmed in the townland of Derrylahan near Dunmanway and their children are recorded as being born there.

Ellen Manning (c1815) of ‘Droumdeega’ married Michael ‘Mick’ Donovan of the same place in 1838 Dunmanway with the same witnesses supporting the other half of the family story. Mick and Ellen DONOVAN are also recorded as living in Derrylahan as were the births of their children.

Juliana Manning (Jul 1821) baptised as d/o Cornelius Manning and Mary McCarthy of ‘Droumdeega’ married Denis Carthy in 1850. Both were of ‘Droumdega’ and witnessed by Denis Donovan and Tim McCarthy. The couple appear to have settled in Togher and Keenrath (just SW of Dromdeegy).

While no direct DNA connection has been established down my wife’s direct branch, two DNA matches have been established to Jerry Manning (c1816-1865) of Dromdeegy, a son or nephew of Cornelius. Jerry married Mary Crowley in 1844 and settled in Cloontiquirk near Dunmanway. The couple had six daughters who all married as O’Brien after emigrating as a family and settling in Placerville (Boise, Idaho). Other genetic connections are suspected to local Manning families but little DNA has been shared to clarify them. Again, anyone connected to these families is welcome to collaborate to prove a shared common heritage.

More next month. Comments, questions, and issues that can be answered as part of future articles can be emailed to DNAmatchingprojects@gmail.com or follow the West Cork DNA projects on Facebook blog ‘My Irish Genealogy & DNA’.

Sat Jul 2 , 2022
On a wet and windy June bank holiday weekend, cabin fever eventually drove Mary O’Brien and family out of the house and down west on the Sunday to visit one of the 23 gardens on the West Cork Garden Trail. Taking on board the statement ‘there is no such thing […] 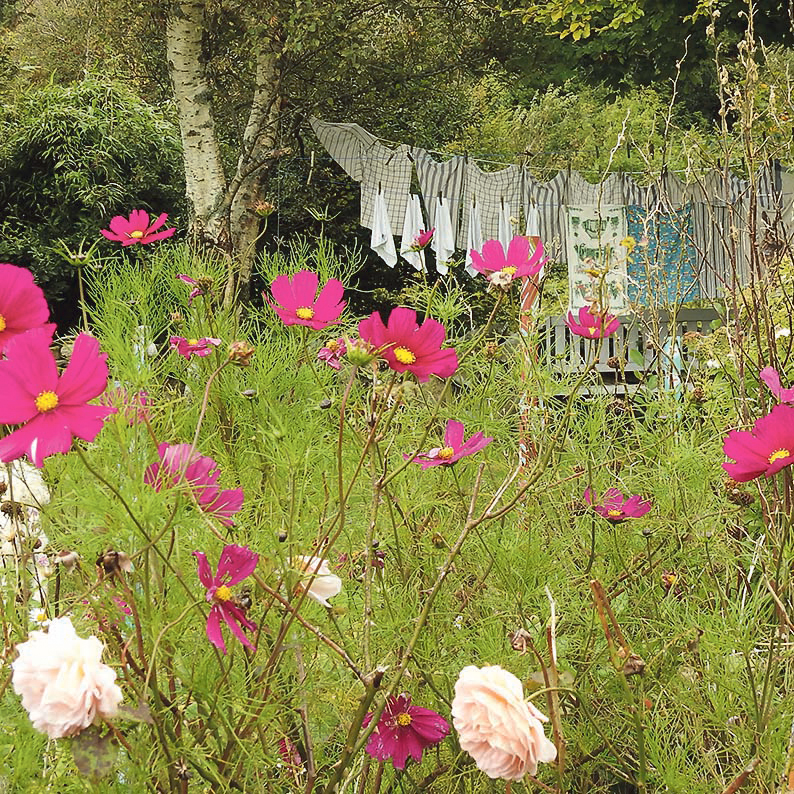