Gill Connole-Fowler 39, is the Executive Producer at Airglow Creative Studios in Clonakilty, a business she runs with her husband Andy. Airglow is a creative content studio based in Clonakilty, that specialises in photo real CGI and 3D motion design for global brands and businesses.

Early on in the business, Gill and Andy made a commitment to always use the latest and greatest state-of-the-art infrastructure and technology. “We wanted to ensure that the work we produce is to the highest calibre, so that we can confidently compete with the best of the studios located in the capital cities, but without the massive overheads,” explains Gill. “We certainly feel we’re in the right place at the right time in Clonakilty. There’s an eco-system of creativity here with more and more digital creatives moving to the area constantly and we have a lightning fast internet speed, faster than anything we ever had in London. We of course travel to speak with global brands and marketing agencies face to face, but the majority of our day to day communications work really effectively via virtual meetings on Skype, Google Hangouts or Zoom.”

Gill grew up in a small rural area near Blarney. After studying Law and German at UCC, she moved to London at the age of 21, where she did her master’s degree in Music Information Technology in London City University. She wrote her dissertation on the copyright issues and ethics surrounding music sampling.

“I was always fascinated with the music industry and determined to work in the area,” says Gill. After university, I temped to pay the bills while I knocked on countless London doors for that all important first break. It was eventually my passion for copyright law that landed me a role in the Business Affairs team at Richard Branson’s V2 Music Group in London. I worked with artists such as Paul Weller, Bloc Party and the Stereophonics, negotiating deals and drafting agreements. The part I loved the most was managing the synchronisation deals for TV ads or films. It was so exciting to witness the creative impact that piece of music could have on a scene in a film or indeed the impact a cool TV ad could have on a relatively unknown artist’s career.”

A dream role as Senior Music Supervisor for Sony PlayStation then followed, working on BAFTA winning games. Gill was part of the largest music licensing team of its kind in the UK and it allowed her to merge her creative side and business affairs experience.

She was promoted to Music Licensing Manager where she was responsible for the overall licensing strategy for Europe, negotiating music copyrights, brands and image and likeness rights and nurturing cross promotion.

From there she progressed onto a Production Management role within Sony overseeing all creative services for games, interactive experiences, marketing and PR campaigns and events. Her role was to ensure that world leading content was delivered with excellent customer experience at all times.

Gill met her husband and business partner Andy during her time at Sony’s internal creative team. She was the Production Manager and he was the Creative Director with a background in Motion Design. “We had both caught the entrepreneurial bug, knew we had complementary strengths and worked very well together as a team,” she explains.

In early 2017, Gill and Andy founded their creative content studio ‘Airglow’ based in Clonakilty, working with global clients.

“Based on our hard-learned lessons at Sony, we developed a refined creative pipeline, ensuring absolute consistency of quality and clarity of communication with the client at all times. It was also important to us that we were producing creative solutions that were not only innovative but really strategic. We wanted to be crystal clear on what our client’s pain points and business objectives were, to ensure that the end result was as commercially effective as it was entertaining. There would be no point in making content for content’s sake.

“My parents were both entrepreneurs and I witnessed first-hand the amazing highs and worrying lows of running your own business. The lifetime’s worth of business advice that my father gave us when we first started Airglow in 2017 was invaluable. It was great to have people who had such unyielding confidence in us in those early days.”

Gill completed the Local Enterprise Office’s ‘Start your own Business’ course, which she found invaluable. “Not only for practical advice on the operations side but also because on the marketing side it really forced me to narrow down who our target clients were and what our USP was,” she says.

“We were setting up a creative content studio in a world where 80 per cent of online content viewed was now video and every brand on the planet was making content to stay relevant. So we decided to focus on high end photoreal CGI and 3D motion design for brands enabling us to stand out as experts in a niche area for a smaller pool of forward-thinking clients as opposed to generalists for a wider range of clients. This was a nerve-wracking decision particularly in the early days but one I’m so glad that we made now because it allows us to be laser-focused on the exact service we’re providing and stand out as a high-quality service.

“Our plan for the future is to remain a boutique creative studio – it’s a formula that’s really working for us. We work closely with a roster of trusted international technical specialists and artists, chosen bespoke for each individual project – again ensuring nothing but the best creative results for the client.”

Describing hrself as  a productivity ninja with a creative spirit, Gill gets a real kick out of supporting others to achieve their own goals.

“Nothing beats that feeling of delivering a project to a client, knowing you’ve gone above and beyond and that not only are they impressed with the quality of the work, but the process in which it was created was a smooth one and the relationship has strengthened,” she says.

“I love seeing the long-term effect that something we have created strategically and cost-effectively for a client has on their brand and business. There’s a great quote from the CEO of Jaguar Dr. Ralf Speth ‘If you think good design is expensive, you should look at the cost of bad design’ and it’s so true.”

Gill’s advice to other’s starting our in business is to “surround yourself with positive people who believe you can succeed – there will be plenty naysayers who you’ll need to get quite good at ignoring.”

“Spend time planning and researching before diving straight in and keep refining that plan on an ongoing basis. You have to be prepared to find it tougher than you ever thought possible, but just keep going and don’t give up. You’ll come out the other side and experience such amazing highs when you do eventually succeed. “

In the early days of Airglow, Gill admits that she did not have a good work-life balance. “I quickly came to realise that self-care when you run your own business is actually the highest priority,” she says “otherwise everything else falls down. I now live my life by way of a system of time-blocking which is the practise of scheduling out everything in my day, down to when I eat exercise and sleep!

“It sounds super nerdy but laying it all out ensures that I better manage my time and discover where precious hours are either being wasted or underutilised. It also ensures that my head is in one space at the one time. I think my three-year-old daughter benefits from this the most, because it means that when I’m in the Duplo playing timeblock for example, my mind is actually there with her and not thinking about work. I’ve also come to realise that focusing in blocks of 90 minutes ensures I’m constantly at my most effective, as opposed to putting in a 9-6 just for the sake of it.”

In ten years time Gill says she would love nothing more than to still be based in Clonakilty, still hitting the beach after a productive day’s work and still working with a wide variety of cool brands from around the globe, bringing complex concepts to life in 3D. ”Though I’d love a bigger studio space that’s for sure – preferably one with a view of the ocean!”

Working towards a low-carbon and resilient future

Wed Oct 9 , 2019
Susan O’Flaherty works as Operations Manager at XD Sustainable Energy Consulting, alongside her husband, Xavier Dubuisson. XD Consulting is an integrated sustainability consultancy providing multi-disciplinary advice and support in the area of renewable energy and energy efficiency. Susan and her family moved to Clonakilty from Brussels in 2001. Prior to […] 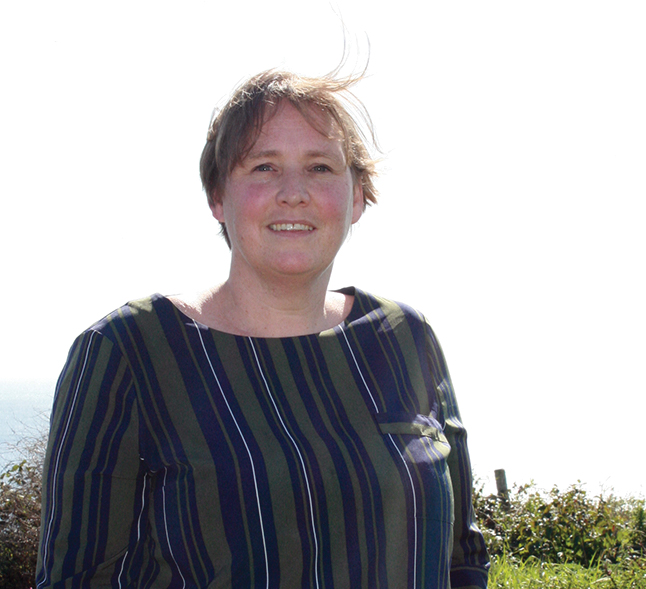