Most of us would struggle to take three weeks holiday. With rent or mortgages to pay, jobs and businesses to manage and family commitments to juggle, it’s not always easy to step back from the hecticness of life and just go. Clonakilty cycling enthusiasts Allison Roberts and Justin Grounds decided to do just that at the beginning of this year, planning a three-month trip around Europe. On February 1, the couple took to the road with their three-year-old son Ari, in a secondhand camper van with bikes on board, setting their return date as May 1. Allison runs a busy chocolate making business so there was a lot of organising to do beforehand. She tells West Cork People how they discovered on their trip that we’re all a lot freer than we really think!

“It’s something we’d been talking about for years and I was so busy with the business last year that it felt like a good time to take a long break,” she explains. “I just worked really hard and stocked up my chocolate before leaving.”

Their adventure started at the top of Spain, winding down through Portugal, Italy and France. When the family weren’t sleeping in the camper van, they stayed in homes organised through the website workaway.info, a worldwide community for sustainable travel that the couple have been members of for the past 10 years. Hosted by families, in exchange for food and board, Allison and Justin volunteered a few hours of their time every day, doing everything from gardening and maintenance to housework.

They also used another network Warmshowers – a hospitality exchange for bike tourist, which works on a ‘pay it forward’ philosophy. Allison and Justin have previously hosted members at their home in Clonakilty.

“It was a fantastic experience, a great way to see people’s sustainable projects and meet wonderful people,” says Allison. “We tried to stay with families who had children so Ari had someone to play with.”

Sometimes the accommodation was completely off the grid. “There were times we had no running water or electricity,” says Allsion. “We stayed with one family in Portugal whose home had been ravaged by fire; they had lost absolutely everything. It was pretty amazing to be able to help them in some small way to rebuild their home.

“Another family we stayed with lived in two caravans connected by a big awning. They were renovating an old farmhouse and had lots of gardening and pruning work for us.”

Along the way, Allison got to take in the Women’s Economic Forum in Portugal, which focused on sustainable change; in Spain they met an inspiring group called the Bicyclistas de Corella, who mirror their own enthusiasm for the power of bicycles (Allsion and Justin are organisers of Clonakilty Bicycle Festival) and they arrived at a monastic community in France just in time to take part in the Easter celebrations.

There were lots of challenges along the way too – at least three pretty major breakdowns in the camper van but with each mishap followed kindhearted people willing to help out strangers. “We met amazing people and we love adventure so got a great kick out of getting over all these problems,” says Allison.

While it hasn’t always been easy travelling with a three-year-old, the family have really enjoyed the trip. “It hasn’t been as restful as we envisioned but it has been an epic adventure,” says Allison. “Ari has grown up a lot and he’s become really good at communicating. He’s learned something new everywhere we’ve visited. He’s at an age where he gets frustrated easily but once we stopped the van regularly to play some games with him, he was fine.”

The inflatable paddleboard they brought with them was a lifesaver. “The paddle board and the bikes gave us great freedom, the trip wouldn’t have been the same without them.

“I think the biggest thing this trip has done for me is help me gain some perspective,” says Allison. “It allowed me to take a deep breath from my business and trust that things will be fine.”

Along the way, they’ve adopted a grandmother; stayed with conspiracy theorists, an Italian fascinated with death and so many more families living off the grid. They’ve witnessed inspiring sustainable projects all over Europe and are coming home with lots of ideas and renewed energy.

“It’s fascinating to see what people are doing with their lives, without restraints,” says Allison. “We are all so much more free than we think.”

Wed May 8 , 2019
Reports from India of toxins in cow’s milk led to a Supreme Court ruling in January 2014 attempting to make safe the milk supply. The toxins, including dioxins, pass into the milk from plastic ingested by the cows, which in India are often left to fend for themselves and can […] 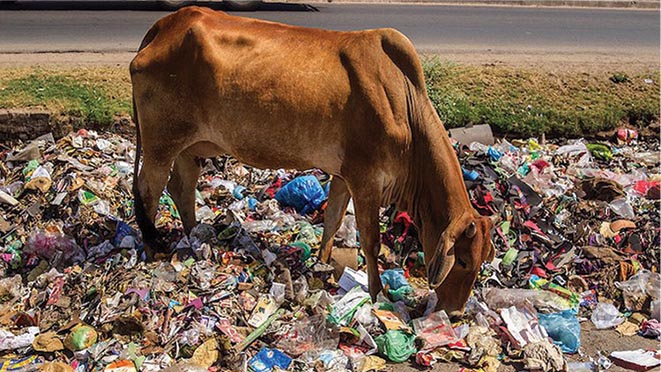