An IPCC special report states that the world needs to almost halve emissions over the next decade and reach net zero carbon emissions by the middle of the century in order to limit global temperature rises to 1.5 degrees. The report labelled global warming as a ‘code red for humanity’.

As the much publicised COP26 being held in the UK rapidly approaches, Queen Elizabeth II was heard on livestream, from the opening of the Welsh Parliament, berating World Leaders for their lack of action on tackling the climate crisis and stating that they didn’t even know yet which World Leaders would be attending the 26th World Conference on Climate Change.

Her grandson Prince William, Duke of Cambridge, speaking on radio agreed with her, saying, ”We can’t have more clever speak, clever words but not enough action.”

COP stands for ‘Conference of the Parties’, and the summit should be attended by ALL the countries that signed the United Nations Framework Convention on Climate Change (UNFCCC) which came into force in 1994. ‘The Parties’ have met almost every year since then, every country on Earth being treaty-bound to ‘avoid dangerous climate change’ and to find ways to reduce greenhouse gas emissions in an equitable way globally.

At the 2015 Paris Agreement each country set national targets known as NDC’s. Despite the international agreement that both developed and developing countries would limit their emissions to 2C with an aspiration of 1.5C, the NDCs that were set, together would result in 3C or more of warming. Already the International Agreement was breached and so built into the Paris agreement is a mechanism that requires countries to return to the table every five years with fresh commitments. Those five years were up on December 31, 2020, but the pandemic prevented many countries coming forward and so COP26 picks up the five year mantle.

Queen Elizabeth II has good reason to berate World leaders. Those countries that have revised their NDC’s, when taken along with the current NDC’s, are woefully inadequate and, if adopted, would result in a 16 per cent increase in emissions, far from the 45 per cent cut needed.

In July of this year, addressing the Austrian Summit, Greta Thunberg said, that leaders are “Pretending to wage war against fossil fuels, while opening up brand new coal mines and oil fields and pipelines…The G7 for example is spending billions more on fossil fuels and fossil fuel infrastructure than on clean energy.”

She continued her address to World Leaders, “you compensate with beautiful words and promises that someone in the future will somehow undo your actions and make them ‘net zero’. And when your empty words are not enough, when the protests grow too loud, you respond by making the protests illegal.”

And so; we will watch the reports and promises coming out of COP26 knowing that Greta Thunberg, Prince William and Queen Elizabeth II are ALL correct so far. New NDC’s will be discussed and maybe some even agreed, but without radical action taken by our political and business leaders we will continue like lemmings, running towards the cliff edge. In the meantime pressure from grassroots is too slowly growing.

As apparently responsible people who are called ‘world leaders’ continue driving a steamroller towards runaway climate change, groups of grassroots individuals are working hard on adaptation and mitigation.

One such group based in West Cork is CECAS, Centre of Excellence for Climate Action and Sustainability who, recognising that the climate emergency crisis and the biodiversity crisis are inextricably linked and must be addressed in tandem, have created a hub at Myross Wood House. Their vision is to attract and showcase academic and commercial organisations to present their cutting-edge solutions to the complex problems that we face, presenting and implementing actions on climate, on biodiversity and on an enhanced circular economy.

CECAS is there to promote community action on climate change; and to be a catalyst for change, providing technical information, guidance and leadership that will contribute to decarbonisation in the West Cork area.

Being based at Myross House, itself a historical building, CECAS aims to become a European demonstration site for implementation of innovative retrofitting of historical buildings. Using techniques and technical solutions to make the building energy efficient will show how the planning departments and construction sector can migrate from unsustainable building techniques to those that offer greater environmental responsibility based on ‘whole-life carbon circular economy’ and ‘one planet’ principles; and how older houses can benefit from retrofitting of sustainable solutions.

Surrounding Myross house are beautiful gardens and grounds. In these, CECAS will host courses on sustainable agriculture, forestry and land management.

Indeed this beautiful indoor and outdoor space is already hosting events such as weddings, festivals, music and art performances, markets; learning opportunities such as workshops, courses and seminars; and individual business needs with hot-desking and office space.

If we, as occupants of Planet Earth, are to survive and thrive through the rest of this century, we need communities to work together to build a future. We cannot wait for others to take action, too much damage has already been done. We ourselves need to work on both mitigation against climate change and adaptation to climate change. Social Enterprise Entrepreneurs such as the team behind CECAS are a vital part of the change we need. Most Social Enterprises rely on the community as much as they serve the community.

As Saoi O’Connor, young climate activist from Skibbereen stated in the Irish Times when asked about her expectations for COP26: “…(Real progress) won’t come from those sitting around the decision-making table. The potential for climate solutions and for dismantling the systems that created this crisis comes from the people; it always has.”

To find out how you can work with CECAS to build a future go to cecas.ie.

Tue Nov 2 , 2021
‘Good seafood cooked simply and skillfully’. That’s the ethos behind O’Connor’s Seafood Restaurant Bantry and one that has stood the restaurant in good stead, particularly faced with the challenges thrown out by this pandemic. Over a year-and-a-half ago, in March 2020, Shane Spillane and his wife Carly opened the doors […] 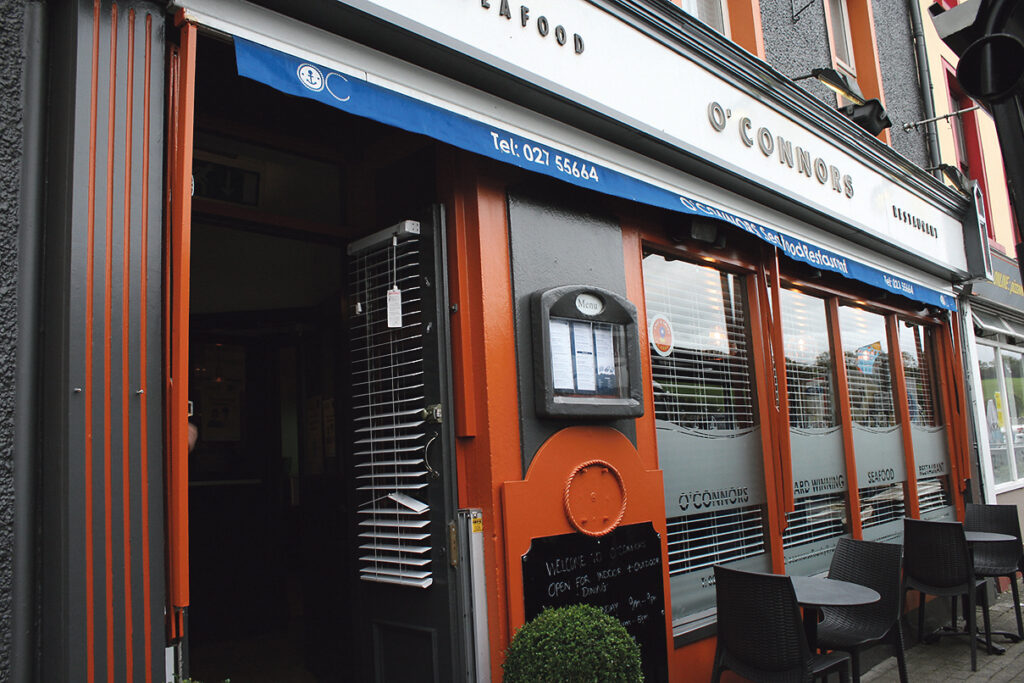