The benefits of improving your home energy set-up and moving towards  more green, energy-efficient models are clear. You become more self-sufficient; you get to tap into natural, sustainable energy sources which can provide you with cheap, available, long-lasting power. You also get to play your part in the journey towards making the earth a carbon neutral planet where we live our lives in a way that is not trashing our environment and putting the lives of ourselves and future generations at risk.

At a European level, energy is a topic that’s at the top of the agenda. When Ursula von der Leyen took up her new position as European Commission President, she launched the boldly visionary European Green Deal, a far-reaching plan that aims to make Europe the first climate-neutral continent by 2050.

The vision set out in that plan includes a programme of change aimed at reducing climate emissions. Included in this are ambitious actions around revising the EU’s climate and energy legislation by June of this year, when we will be seeing a big legislative package called the ‘fit for 55 package’ that will include the reform of the Energy Efficiency Directive and the Renewable Energy Directive. It will essentially impose higher renewable energy targets and energy efficiency targets.

These legislative changes, aligned with a shift in public opinion as Covid-19 (and its scientifically-proven links to the climate crisis) forces us all to become more aware of the perilous situation the planet (and all of its inhabitants) is in, means that the time is right for impactful change.

With a target spend of 37 per cent of the €750 billion Next Generation EU recovery fund earmarked for spending on Green Deal objectives, it means that we are looking at a roll-out of the sort of financial backing we need to be able to fully realise our good intentions, and get behind moving away from fossil fuel towards cheaper, more energy-efficient green energy sources.

Within a strong and comprehensive policy framework, European industry and businesses are looking at opportunities to be ‘trailblazers’ as we transition to a more modern economy that values ‘wellness indicators’ as our base lines around the measurement of how an economy is thriving, rather than the limiting, abstract and unbalanced traditional (and dated) tool of using GDP as our benchmark measuring tool for ‘success.’

What all this means, for most of us, is that the Europe we live in over the not-too-distant future, is transitioning towards becoming a universally fairer place, where we live in warmer homes, in a healthier and safer planet.

In terms of energy, the evolving European model, with its moves away from a reliance on dirty, unsustainable, environmentally-destructive fossil fuels, opens up possibilities of providing resilient energy supplies and empowering people to move in another direction.

One of those directions, is towards renewable self-consumption, what Solar Power Europe describes as: cheap and clean power at your doorstep.

In this ‘self-consumption’ model, we see families, communities and businesses controlling their energy bills and protecting themselves against volatile energy price fluctuations. We see a place where those consuming energy have real choice. The more people ‘sign up’ the more the market will, in the words of Solar Power Europe ‘steer the development of solutions such as storage, smart appliances and more flexible contracts for consumers.’

At a legislative level, the European Commission has an important role to play in ensuring that such consumers – both residential and industrial – are able to use the energy they produce and access the benefits of payment for excess energy injected back into the grid.

On the home-front, in Ireland, the Government have increased the residential and community retrofitting budget by 82 per cent to €221 million for 2021, which will include retrofitting of social housing. They also launched a microgeneration consultation last month to finally bring support to domestic solar PV, wind, hydro and Combined Heat and Power (CHP).

Micro-generation, which includes micro-solar PV, micro-hydro, micro-wind and micro-renewable CHP with a maximum electrical output of 50kW, is designed to primarily service the self-consumption needs of a property where it is installed.

Currently in Ireland there is no support scheme for this range of micro-generation technologies. There are a number of grant schemes available that support renewable technologies, particularly Solar PV, for self-consumption, such as the Domestic solar PV and Better Energy Communities schemes operated by the Sustainable Energy Authority of Ireland, and TAMS II operated by the Department of Agriculture, Food and the Marine.

Developing a Micro-generation Support Scheme is a positive move, which allows people and communities to become actively involved in the energy transition. It will support new micro-generation projects and give individuals, families and communities more opportunities to generate their own renewable electricity, and receive a fair price when they sell the excess into the grid.

Thu Mar 11 , 2021
Mags Riordan of Bumblebee Farm is guiding us through the planning, planting and caring of a bed for cut flowers. By the time summer arrives the bed should boast an abundance of pollinator-friendly flowers ready for cutting and enjoying. This month she focuses on seed sowing. Most seeds are easy […] 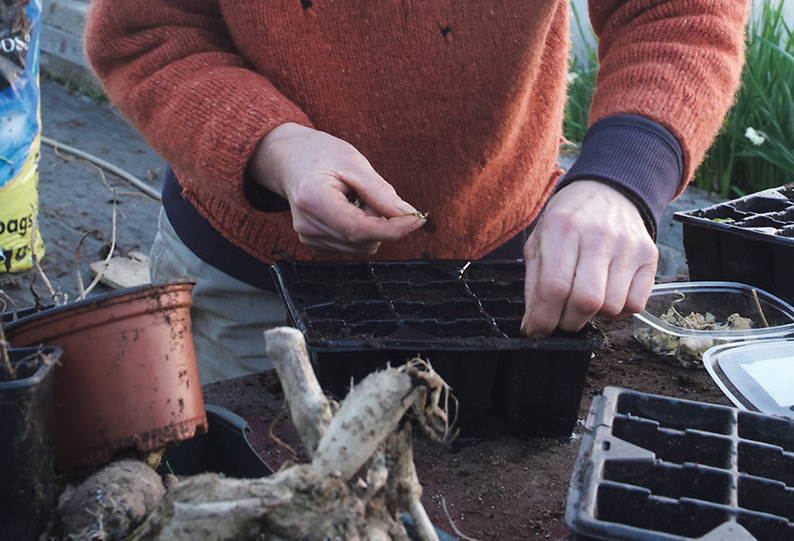