When Paul and Gary O’Donovan won Olympic silver medals in 2016, Skibbereen was buzzing; and in the years following that success, the river was alive with Olympic hope. The number of junior beginners in the club rapidly doubled, as youngsters, who had watched two local lads create history and become national celebrities, caught the excitement.

This morning at 9am; the morning that Skibbereen rowers brought home the gold, as I watched the youngsters of the same club train on the water, I reflected on the quality of these rowers’ elite performance, which requires high levels of power output at Maximum Oxygen Uptake with heart, lungs, circulatory system and muscles all working independently and together to maximum.

The people of Skibbereen are immensely proud of their rowing club, which pulls in hopeful Olympians from all around West Cork. I wonder how many of these people realise the contribution that ‘they’ have made to ensuring that West Cork continues to produce Olympians.

These same people came together to protect West Cork when an American Corporate applied for planning permission to build a polymer compounding facility in Skibbereen.

The factory would have been venting chemicals such as antimony; heavy metals, dioxins, furans and polyaromatic hydrocarbon, along with particulate matter from its chimneys, and these fumes would be carried by the prevailing wind right across the town and directly to the school. Long-term exposure via inhalation to antimony alone causes respiratory effects such as inflammation of the lungs, chronic bronchitis, and chronic emphysema. Winona, home to the company’s headquarters, has the worst record of lung disease in the whole of the State of Minnesota.

However, West Cork came together to protect Skibbereen and thus our famous rowing club can look forward to training many more world-class athletes. The campaign to ‘Save Our Skibbereen’ is a great example of how looking after our environment also looks after us and has far-reaching effects.

Bantry Bay, Protect Our Native Kelp Forest for example, had to start out by informing people what kelp is and why it is vital, not only to the local community, but also to the planet.

They had to explain how kelp beds are the nurseries for fish, which then grow to a size that can sustain our fishing industry and feed the visiting dolphins and whales that attract tourism to the area. They explained how kelp forms a natural storm barrier, massively reducing coastal erosion, and how it is one of the most important carbon sinks, removing carbon dioxide by photosynthesis and sequestering it in parts of the plant that break off; these parts are washed out to sea and sink in the deep ocean where they lie undisturbed, safely trapping the sequestered carbon.

The fight against climate change has long focused on scaling back humanity’s emissions of planet-warming carbon-dioxide but, as the ‘plant a tree’ initiatives recognise, finding ways to actually pull existing CO2 out of the air and lock it up somewhere safe is vital if we are to reduce the rapidity of global warming. The Protect Our Native Kelp Campaign is not only of importance to the local community, supporting marine tourism, fishing and the coastline, but is also a part of the much larger global effort to arrest rising temperatures and reduce the resulting catastrophic weather events around the world.

Not only is the importance of protecting the Native Kelp Forest difficult to explain, with immediate danger to the local public less obvious, but the court case has also been complex and far from clear cut. The licence to mechanically harvest over 1,860 acres of Kelp in Bantry Bay was granted in 2014 by the Minister for State at the Department of Housing, Planning and Local Government. The community have been campaigning against this decision for over four years.

As was reported in West Cork People, in May 2020, The High Court ruled that there is ‘no effective licence to permit the mechanical extraction of kelp from Bantry Bay because the Government failed to comply with all the requirements of the 1933 Foreshore Act, thus the licencing process is not complete’. Whilst this was in some ways welcome news as no kelp extraction could occur until the licence came into effect, it also left open a route for the granting of the licence and provided no resolution to the arguments all sides had brought before the High Court; and so the Kelp Campaign and the Government both took the case to the Supreme Court.

Noting that the case had been decided on issues that the Judge in the High Court introduced into the proceedings, rather than something the plaintiff had pleaded, the Supreme Court observed ‘The pleadings in a case set the parameters and fix the issues in dispute between the parties and those to be determined by the court’ and ruled that a decision must be made on the pleadings and so the case must go back to the High Court for further hearing and case management. The legal issues in this case are complex and as yet there is no completion. You can read the Supreme Court case at https://tinyurl.com/4764v978

The community of Bantry and West Cork are now faced with the cost of going to court yet again but the campaign looks forward to the High Court’s adjudication of the legal arguments they have made. They have a more difficult case in court than the Save Our Skibbereen Campaign faced, and they have higher costs in a long drawn-out process. Nevertheless the immediate advantage to the community and the importance to future generations, though initially less obvious is no less impactful than that of stopping a polymer compounding factory from spewing out fumes that injure the lungs.

West Cork came together to protect Skibbereen. West Cork is coming together to Protect Bantry Bay’s Native Kelp. Indeed the people of West Cork are campaigning over many, many, environmental issues. They are putting time and money into opposing decisions that will adversely affect the future and to fight for improvements to the decision-making process; and they are doing this because they understand the importance of our environment and how interrelated all of these decisions are.

Irish rowing in 2021 has won Olympic Bronze and Olympic Gold. For this sport in Ireland reality changed when perception changed. Fintan McCarthy, now alongside teammate Paul O’Donovan, an Olympic Gold Medalist, was 19-years-old as he watched the 2016 Olympic final. He told the Southern Star that it showed him what was possible. He trained the same as Gary and Paul, with the same coach Dominic Casey, on the same river, in the same club. He said, “If they can do it, I can do it.”

Human reality is moulded by perceptions. The ‘people power’ to create change is greater than we at first realise. Change the story we tell ourselves and we change the future. We can all tell a different story, we can all dream of a better future. Once our perception of what is possible, changes, once we envision and hold a reality based on new ideas and values, we are empowered to take the actions to also create that better future.

Today there is no place for decisions based solely on linear economics that destroy the future and benefit only a few; we are building community-based regenerative cultures for our grandchildren and their grandchildren and because West Cork recognised that, today our Olympic hopefuls training on the Ilen breathe in lungfuls of clean air.

Today, there is no mechanical kelp harvesting in Bantry Bay. The fish nurseries are nurtured safely, eco tourism has a vibrant future and the kelp forests protect the coast from erosion and pull carbon from the atmosphere locking it down in the deep ocean.

You can find out how to support the Kelp Campaign by going to bantrybaykelpforest.com.

Mon Aug 9 , 2021
Birds are on the move and one to watch out for this month is the Black-tailed Godwit says Nicholas Mitchell Birdwatch IrelandWest Cork. You may have noticed a lot more juvenile birds in your garden and hedgerows this last month as the fledged birds disperse from their nest sites. Their […] 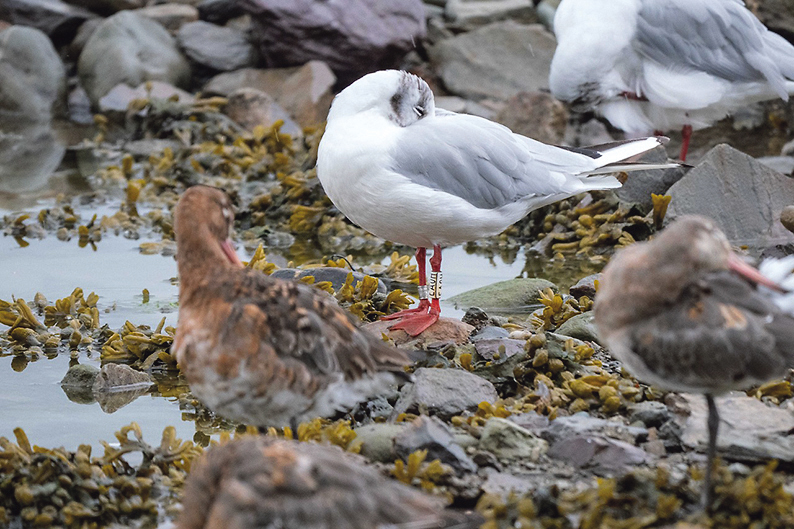