In a week that has seen the launch of the European Climate Law at EU level, and the Climate Bill at home in Ireland, we’ve seen a few days of highs and lows.

In the same week that NASA’s Perseverance rover converted carbon dioxide to oxygen on planet Mars, on planet Earth, most notably the subcontinent of India, people were dying because of a lack of oxygen supplies.

The coverage charting India’s health system in collapse, as Covid 19 wreaks havoc, raised stark questions around inequity and how our planet’s most vulnerable citizens are getting a raw deal on so many levels.

There is much to be proud of in the long-awaited ambitious Climate Bill at home, and I hope it’s transition into legislation will be swift. While I don’t want to be loose with language, I can hand-on-heart say there is good reason for optimism, or at least some semblance of hope in the overall thrust of it. It is heading in the right direction and, against the backdrop of a planet in a climate and biodiversity emergency; that direction is one we need to be taking very, very seriously.

I wish I could be as optimistic about the EU-level Climate Law. It’s disappointing, and an unwelcome example reflecting Greta Thunberg’s analogy of the earth being like a burning building. The house – our ‘home’ – is burning down and still the larger lobbies push their weight into the ring at a political level in Europe, and play money-focused games that ignore the dire emergency we are in.

A scientist spoke to me in recent days about just how perilous a situation the earth is in. He explained that while we are in a climate and biodiversity emergency that is seeing an on-going wipe-out of species and habitat before our blinkered eyes, when it comes to the crunch, some species will be better able to adapt and survive the catastrophe of a disintegrating planet.

He went on to say that the human species do not have the resilience of other more adaptable living species. Unless we dramatically change course we will, as a species, be wiped out. I repeat: ‘wiped out’.  Sadly this alarming prediction is scientifically backed. Even more sadly, the timeline to irreversible planetary breakdown to the point where human life is unsustainable, is short. There is a window of opportunity to reverse a fatal outcome for humankind. The window of opportunity is ‘now’.

Overwhelming numbers of people who understand the danger we are in and want the planet to survive into the future, have been taking to the streets to demand urgent, comprehensive action. Why do we still have too many political leaders bowing to lobbies whose ambitions clash with science and the overwhelming evidence that we are on the road to nowhere if we carry on the way we are going?

Stats and information released on marine life, birds and soil degradation over the past week, from the European Environment Agency, Birdwatch Ireland and other sources, indicate that life at every level is in peril.

Twenty-six per cent of Irish bird species are red-listed and described as being in danger of extinction. Our marine life is severely depleted and threatened. Intensive farming, erosion, pollution and chemical use is impacting massively on soil, that most fundamental component in the global production of healthy food as well as an important and comprehensive carbon sink facility. Put bluntly, soil is being stripped, by human intervention, of its remarkable, long-term, natural abilities to sustain life – plants, animals and humans.

The dire situation in India serves to illustrate a likely regular future scenario if we don’t ramp up the action around tackling the climate emergency. While India is struggling to cope with the ravages of Covid-19, a zoonotic disease inextricably linked to climate change, the climate emergency is one that has already been making itself felt on the subcontinent. Ranked as the fourth in the world in terms of countries already profoundly impacted by the climate emergency, India (along with many other developing nations) has, for some time, been experiencing a reality that we in the more developed parts of the world have, until recently, been able to conveniently air-brush.

Covid, the first major climate-linked disease to reach our shores, has been described as a force that knows no borders. It’s a phrase that, unless adequate radical action is ramped up, will be rolled out with more regularity as the even bigger forces of the climate emergency plough through geographical and economic borders, land squarely on our privileged doorsteps, crash through our own front doors, and explode in metaphorical flames.

There is hope. There is time. But the clock is ticking and if you don’t want the alarm bell to be tolling for you and yours, it’s time to realise that this fight must be fought with all hands on deck.

We are starving our bees

Tue May 4 , 2021
Since the 1980s, due to landscape changes, half of our wild bee species has undergone huge decline. One third of our ninety-eight wild bee species are now threatened with extinction in Ireland. Bees (and other pollinators, such as wasps) are declining because we have drastically reduced the areas where they […] 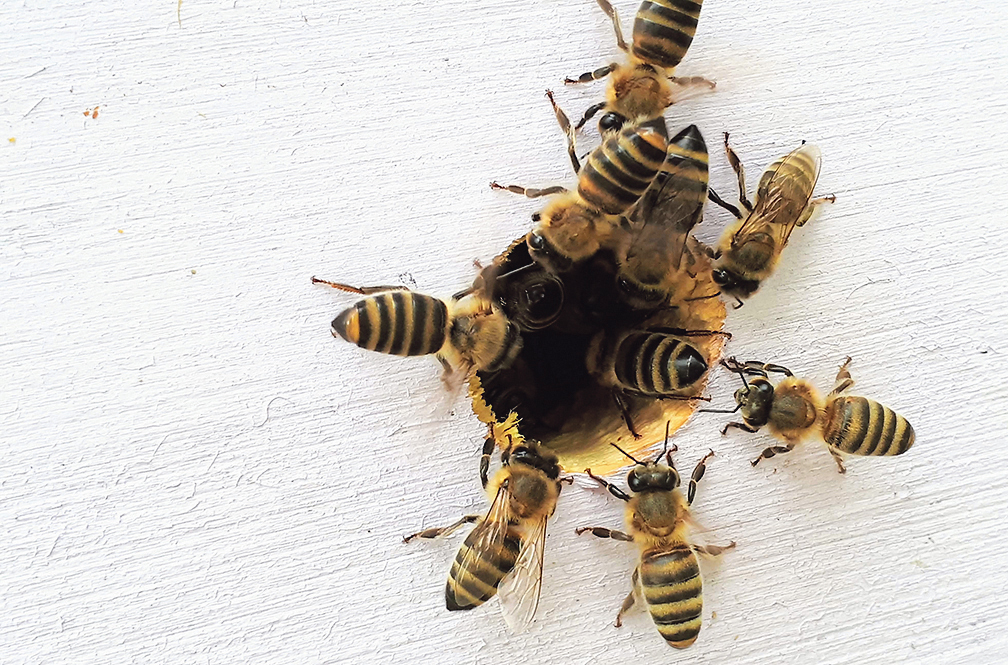