IWDG Sightings Officer, Pádraig Whooley on the changing trends in our seas, including a rarely seen Arctic walrus, and the red flags this raises.

Since the start of summer in early May the Irish Whale and Dolphin Group (IWDG) has received and validated hundreds of cetacean (whale and dolphin) sighting and stranding records from the public, researchers and boat operators alike. All of this data, once validated, is invaluable, as these sightings go towards Ireland’s longest established, continuous dataset, which dates back over 30 years. This data is used in many ways, but most importantly it is this data that enables IWDG be a voice for Ireland’s cetacean and basking shark populations when it comes to protection of both these magnificent animals and their habitats.

At a glance we can see that this summer alone we have documented no less than nine species in West Cork waters and although most of these are the ‘usual suspects’ of cetaceans that we’ve come to expect, they also include the planet’s second largest shark, the mighty yet planktivorous basking shark and a rarely seen walrus.

There’s probably no need to rehash the story of this Arctic vagrant here, as it has been headline news for months since it was first reported to the IWDG on March 14 on Valentia Island, Co. Kerry. Its quizzical expression and boat sinking antics have gobbled up column inches and filled Gigabytes of space on social media platforms in the five countries it has travelled through over the past six months (Ireland, Wales, England, France and Spain), during a 3,000 km saga that has taken it as far south as San Sebastian in Spain and back.

Since returning to northern latitudes (a relative term if you’re a walrus) reaching landfall at Clonea Bay, Co. Waterford on August 2, it’s been like Groundhog Day. Every harbour it visits is like the first. This was a story that was always going to pull at the heartstrings of a certain animal welfare cohort and the calls for action based on concerns that it was exhausted, in poor shape, emaciated, stressed, or even injured, were predictable. And of course all this shaped the narrative that somehow this walrus needed human intervention, which ranged from building it a pontoon to act as a safe and comfy sofa to haul out on, so it could rest without causing damage to local boats, to the extreme end of the spectrum, where there were calls for a rescue and repatriation back home, wherever that might be. In fact it needs none of these things and really just needs to be left alone.

IWDG believe that wildlife is resilient and rarely benefits from our meddling. The notion that an aquatic Arctic mammal that has evolved to survive in the harshest of environments, needs us to build it a pontoon, seems wide of the mark, as it increases the risk of it becoming too comfortable and only encourages it to remain longer; neither of which are in its best interest. We all presumably want the same thing, which is the safe return of this individual to its Arctic home, under its own stream. The bigger and more worrying question is what sort of a home will be waiting for it, if and when it does return?

It’s great to see people getting exercised about wildlife and IWDG took some online criticism for daring to reveal the Walrus’ latest location. We believe that people have a right to witness such rare events, responsibly, and have been over the past 30 years the strongest proponent of whale watching, particularly here in West Cork, and so we don’t buy into the philosophy that its location needs be kept secret. Given the wildfire nature of social media today, this is never going to be possible anyway. By the time we wrote about any location, local boat owners were already out in numbers for a closer gawk and that all important selfie.  However, we consistently asked people to observe it from land using optics and to be mindful of the predicament the walrus was in and not to approach it on boats due to the risk of disturbing it while hauled out. Some of the behaviour I personally observed in Dunnycove laid bare just how far removed some people have become from the natural world.

This presence of a walrus in local West Cork waters should raise lots of red flags for us, and for anyone still sceptical about climate change and how it is impacting on the marine environment in particular, this is a really good case in point. Fragmentation of Arctic sea ice may well be the reason why this sub-adult walrus has ventured so far from home, and although this is by no means the first walrus record for Ireland, the previous one being in Clew Bay, Co. Mayo in April 1999, it will indeed be interesting to see if the IWDG documents an increase in sightings of this extra limital vagrant in the years and decades to come.

In recent years IWDG has confirmed sighting of a new whale species for Ireland, the Arctic bowhead was photographed in May 2016 off Carlingford Lough, Co. Louth and then in April 2017 what was a ‘probable’ bowhead from a local whale watching boat off the Stags near Toe Head. July 2015 produced a record of a beluga whale off Dunseverick, Co. Antrim and since then there have been quite a few Arctic pinnipeds, namely hooded and bearded seals. As I type, there is also at least one Californian gray whale (also called ‘Wally’) swimming between the Mediterranean and the Atlantic and the only route for them to the Atlantic is through the northwest passage which seems to be sufficiently ice free now in summer to allow these leviathans return to the Atlantic, where they’ve not been recorded since the 18th Century.

So this walrus is in good company and is joining a host of marine mammal species that may be actively seeking a new home well outside their normal range. But it’s not just Arctic species that are on the move. In mid August my wife and a friend were walking on Long Strand, where among a host of moon jellies and compass jellyfish, they saw a Portuguese Man O’ War washed up. Now there is nothing that unusual about seeing this tropical and potentially dangerous siphonophore washed up along the Irish Southwest, as in recent years this has become something of an annual event, as southerly gales have seen thousands of them wash up on West Cork beaches during late September and October; but as Dr. Tom Doyle UCC says, this is the earliest record he has heard of for this species.

So things are changing in our marine environment and changing fast, as different prey and predator species react to the new conditions they find themselves in. This will likely impact on our native species, the ‘Usual Suspects’ we referred to at the beginning, as they’ll have to co-exist with these exotic visitors, or risk being forced out themselves. We live in interesting times and it has never been more important that organisations like the IWDG with All Island networks of volunteers and established biological recording schemes are out there recording these changes year after year and decade after decade.

We’d ask Citizen Scientists fortunate enough to see whales, dolphins, basking sharks (or indeed walrus) to report your observations using our critically acclaimed new mobile Reporting App, which was launched this summer, or by simply clicking on the ‘Report a Sighting/stranding’ links on www.iwdg.ie. Your sightings are important and are a key monitoring tool that helps us track the movements of these magnificent mobile marine mammals as they pass along the West Cork coast and beyond.  All sightings and strandings data, once validated, are made available in real time on our website and can be interrogated by species, location or timeframe, with the results available in map or table format. This is an invaluable tool for anyone with an interest in the conservation of our marine megafauna in West Cork waters.

Happy whale watching in the Autumn ahead.

Mon Sep 6 , 2021
Abi O’Callaghan-Platt lives in West Cork and is a Campaign Manager for the environmental NGO, VOICE Ireland. Are you passionate about the future of the West Cork community you live in? Are you interested in charting a sustainable pathway for your town or village? If so, the Sustainable Communities Training […] 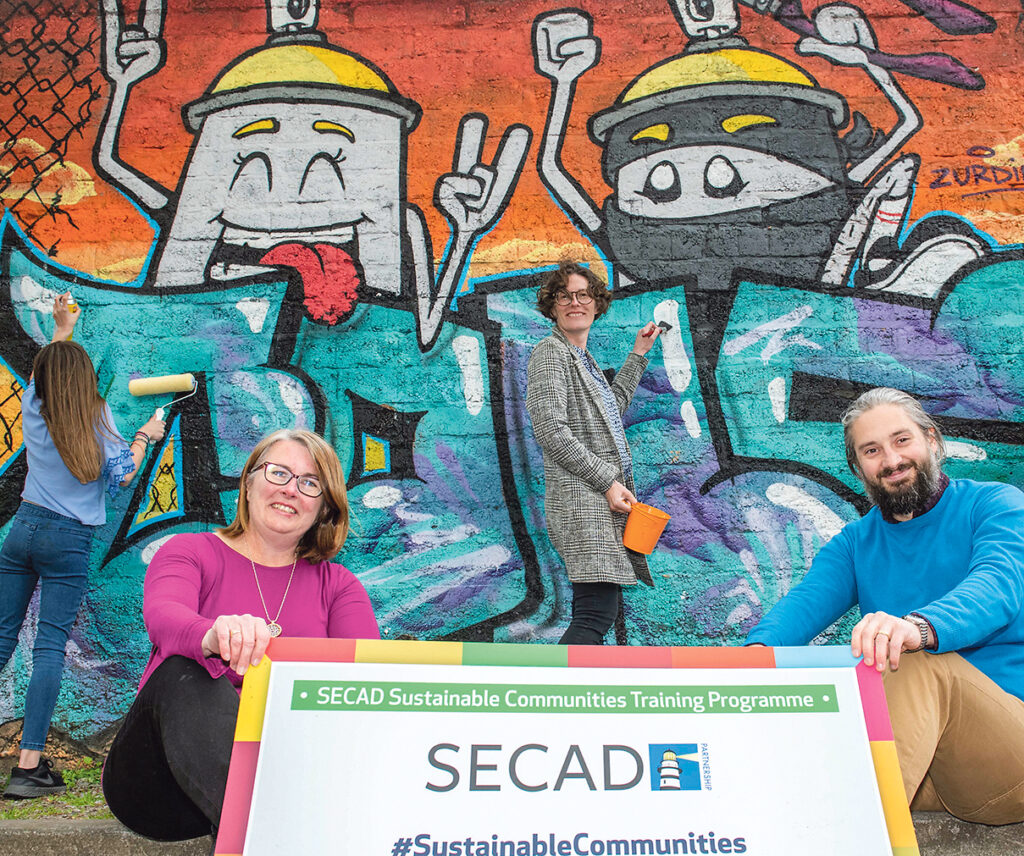