Once a month, the members of the European Parliament up sticks from their usual base in Brussels, and travel down to Strasbourg in France. Strasbourg is where the monthly plenary sessions take place. That’s where the entire Parliament, including us 11 Irish MEPs, come together to vote on motions and resolutions etc. It’s where the bulk of parliamentary decision-making takes place. It’s where, in the November session, a Europe-wide climate and environmental emergency was declared.

The European Parliament declaration of a climate and environmental emergency is news I welcome. Of course, I don’t want to say that this is good news. The whole subject of climate change is too appalling to be in any way celebratory. But this vote puts an official political stamp on the issue, which brings pressure to bear which must be reflected in decision-making across all aspects of domestic and international affairs. It’s particularly timely in the week leading up to the UN Climate Change Conference COP 25, in Madrid.

But what can a declaration do to actually change the ecological crisis we are in?

What it does is this. It sends an important message internationally. Declaring a climate and environmental emergency throughout Europe signals that the ecological catastrophe we are in the midst of, must not be taken lightly. The declaration pushes the issue to the highest levels of political priority. Which is exactly where it should be.

It’s easy to forget, sometimes, as we carry on with our day-to-day lives, that climate change can be devastating. In that very human way, we all have strategies to get us through the unpleasant parts of life. We can sometimes switch off from reality. It’s good sometimes, to remind ourselves.

Of course, the most potent example of the impacts of climate change we have seen on our shores, was when Storm Ophelia struck on the 16th of October 2017. By the time Ophelia reached Irish shores it had been downgraded to storm status, from its earlier status as a hurricane.

With a red weather alert in place to greet this monster, we were still surprised by the force that tore through the country, leaving three tragic deaths in its wake. We had seldom encountered weather as extreme, with gusts of 191km/h recorded at Fastnet. Ireland’s biggest wave ever, was recorded off the Waterford coast. It measured a staggering 17.8m (58.4feet). Ophelia was the worst storm to affect Ireland in over 50 years. It cost us in the region of €70 million to repair the widespread damage.

The stark lesson that Ophelia brought into our homes, was that these catastrophic weather events are no longer pictures on our screens beamed from far flung countries. Climate change and its effects are being felt worldwide, even in moderate climates where, until recently, we had a false sense of security.

Further from home, the disappearance of a major penguin colony in Antartica, is an example of how Climate Change is impacting on an ecological level. Thousands of chicks just drowned, when their home was destroyed in severe weather in 2016. Now, three years later, we are seeing the stark reality of the effects of weather extremes caused by climate chaos.

Under normal conditions, the penguins would have been expected to recover in numbers and start to rebuild their colony. Sadly, though, what we’re seeing is wipe-out. The colony had homed up to 25,000 breeding pairs of Emperor Penguins for decades; that’s almost 10 per cent of the global population. The penguins need a stable ice-platform, but the Brunt Ice Shelf they had inhabited is breaking up due to global warming. Scientists are saying the colony essentially disappeared overnight. It hasn’t re-established.

Climate change has been on my agenda for years. When I first visited the Antarctic in 1986 and again in 1989, effects of global warming were already being felt. Huge icecaps were melting and the impacts on wildlife and habitats was kicking in.

Back in the 1980s the terms climate change and global warming were not widely known or understood. Until relatively recently there was a pretty widespread, if slightly tongue-in-cheek, view that global warming would be good for Ireland, that it would warm the place up a bit! Nowadays, the reality of the effects of global warming and unchecked greenhouse gas emissions and the knock-on effects on climate, weather and ecology, is clear, and it’s time for action at home and internationally.

The declaration of an emergency at an international level, is a step towards a more concerted and unified approach to the life-threatening challenge of climate change, that is finally being acknowledged and given the serious attention it deserves.

Tue Dec 10 , 2019
The Skibbereen Climate Action group met for the first time at the West Cork Hotel on November 20. Organised by Jim O’Donnell and Noel Casserley, the purpose of the meeting was to bring interested people together from across the local community and business to discuss how Skibbereen can become a […] 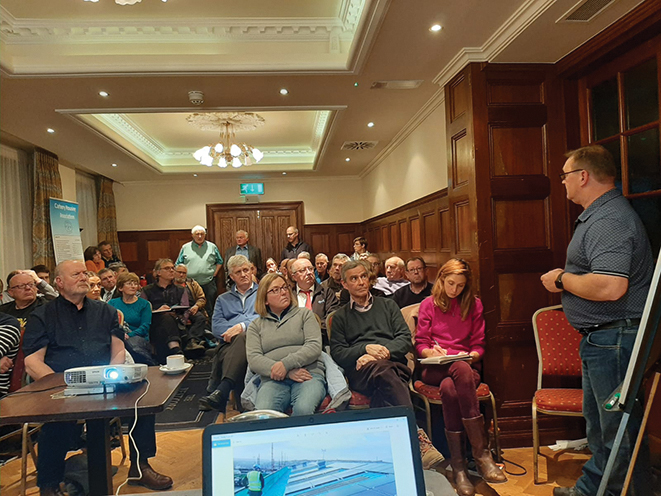