Appropriation is a long-established strategy in modern, post-modern  and contemporary painting. The desire to ‘revamp’, ‘re-mix’ or ‘re-orchestrate’ a masterpiece of old is as complex as it is interesting. Picasso’s appropriations of ElGreco were both a way of identifying with the Baroque master and his greatness, and colonising that greatness. Gordon Bennett’s appropriations of Van Gogh were, in contrast, a way of exploring his Indigenous Australian identity in a white Australian world. Taking a more famous example, Francis Bacon’s appropriations of Velazquez’s Pope Innocent X sought, not unlike Picasso’s, to assimilate the tradition of European painting, and respell it in the terms of a more terrifying existential reality, in which the very erasure of the image is imminent. There are, in short, many reasons to appropriate another’s work.

Appropriation of an image is different to a copy of an image, in that the appropriated image is in some way transformed. Amongst figurative artists today,  two outstanding painters – Jake Wood-Evans and Nicola Samori – have made this process the basis of their respective practices.

The British painter Jake Wood-Evans appropriates, amongst others, the works of Thomas Gainsborough (1727-88); the Italian, Nicola Samori, the works, amongst others, of Jusepe de Ribera (1591-1652). Like Francis Bacon, partial erasure of the image is a central aspect of their respective processes. Apart from this starting point, however, their work has little in common. Wood-Evans works in an expressionist manner, the speed and energy of his painting a large part of his appeal. Samori, on the other hand, paints as Ribera painted, in a Baroque manner, with layers of beautifully applied oil. Whilst both painters partially erase what they appropriate, Wood-Evans’ defacement is integral, like Bacon, to the energy of his brush work, whilst Samori’s involves a peeling away of the paint itself.

For Wood-Evans and Samori the problem of subject matter has been neatly solved. Where their art lies is in how they transform the compositions of others. Wood-Evans draws heavily on the strategies of modernism: in essence, strip back and reduce; turn form into gesture, a full palette into monochrome, deface and abstract. The original painting, for example Gainsborough’s ‘Sophia Charlotte Digby, Lady Sheffield’, becomes a virtuosic blur of brush strokes, emerging as a Richter or Rothko in period costume.

Samori’s approach is, in contrast, decidedly postmodern. He has no interest in transforming the painterly qualities of the Baroque originals he appropriates – quite the opposite, in fact. Samori, in technique, is as Baroque as Ribera, and his delivery every bit as good. His interventions are, rather, surgical, or else predicated on the natural corruptions of the surfaces he paints on. In his surgical interventions he incises the skin of the oil paint and peels it away in the areas to be defaced.  In other works, such as ‘Lucia’ (2019), an oil painting on onyx and trani stone, Samori makes use of a natural corruption in the stone to locate, in this instance, the eyes of ‘Lucia’, conveying a sense of blindness, articulated by the stone itself.

Samori sees the painted body as an actual body; one that is wounded, by disease, violence, blindness, time. His works on corrupted stone fuse the body’s wounds with the mineral essence of the earth. It is a profoundly nuanced vision, rich both in the art historical context and as a primal sensory experience. In contrast Wood-Evans utilises the art historical image as a carriage for a painterly acceleration, where the inspired speed of delivery partially erases the subject. The subject becomes a ghost of its original, and a new subject emerges: the artist himself, courtesy of the energy of his brush.

In re-conjuring great work of the past Samori and Wood-Evans seek to both embed themselves in a figurative tradition, largely broken through the 20th century, and to claim a space in contemporary practice. One could see their work as a bridge between the Baroque and Romantic periods and the post-modern, pluralistic present. Their work prompts us to cast our gaze back, to re-engage with mastery in figurative painting. They are also, however, creating an echo chamber, in which original composition fades. The issue at stake is form and content. When form dissolves entirely there is nothing for another artist to respond to. The question arises, what can figurative artists today give to artists of the future? Samori and Wood-Evans seem to answer: technique, feeling and virtuosity. That, for now, seems to be enough.

‘Bringing Outside In’ at Dunmanway Library

Sat Jun 4 , 2022
Artist Jackie Nevin and Dunmanway library are enjoying an extraordinary response to their collaborative art project ‘Bringing Outside In’. The library window, a focal point in the town, is home to a series of wonderful sculptures that celebrate the natural world. Dunmanway library has collated and presents books and activities […] 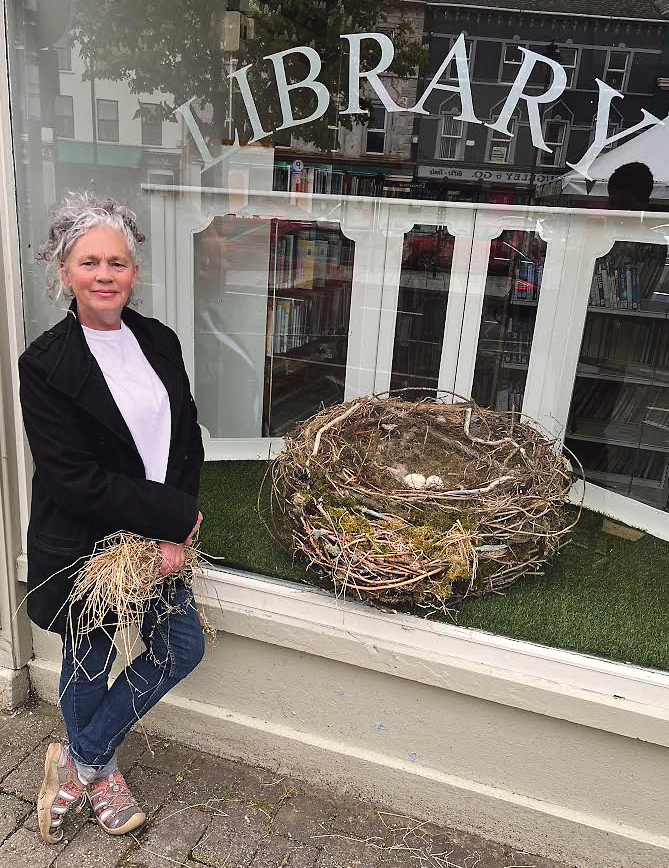