Meitheal na mBan is an inspirational and empowering series of online concerts led by Ireland’s top female musicians and artists as they perform directly from their own homes, in a much-needed fundraiser to support the victims of domestic abuse. For many women at this difficult time, has left them and their children in great danger. The threat looms largest where they should be safest – in lockdown in their own homes.

Responding generously to this vital need, some of our most visible female talent will reach musically across the virtual divide to stand with those who are at their most vulnerable at this time. The weekly series will be broadcast on TG4’s YouTube channel on Wednesday the 20th of May at 9.30pm and continue for four weeks. Some of the musicians performing on the series include Mary Black, Sharon Shannon, Mairead Ní Mhaonaigh, Muireann Nic Amhlaoibh, Julie Fowlis, Nell Ní Chróinín, Lisa O’Neill, Bronagh Gallagher, Wyvern Lingo, Cliona Hagan and Cathy Jordan.

Donations can be made online to  www.womensaid.ie/donate or by texting the word ACTION to 50300 to donate €4*

Singer Nell Ní Chróinín felt this was a project she just had to take part in: “I’m so happy I was asked to be a part of this campaign for Women’s Aid and the work they do is so important and it’s really vital that we all support it. I hope that in some way this music might give a little bit of relief or solace to those at home living in difficult circumstances.  It’s so important we can do whatever we can to help- and I hope I can help from my home.”

Sarah Benson, CEO Women’s Aid says, “For many of us home is a place of safety in a time of uncertainty and during the Covid19 national emergency we have all been told to stay home.  For thousands of women and children across Ireland, home has become a place of violence and fear.  There is a ‘perfect storm’ of circumstances which is leading to a major increase in the number and the severity of incidents of domestic abuse.Women’s Aid are doing all we can to support women experiencing domestic abuse, at this time of increased need. In the days and months ahead we need even more support to keep our vital services going and we are delighted to partner with TG4 to bring Meitheal na mBan to screen and to all the incredible artists for so generously donating their time and talents.’

The series will be presented by Ciara Ní É, a spoken word poet, and broadcaster. As well as acting as Bean an Tí, Ciara will also perform a specially commissioned spoken word piece entitled Céim ar Chéim about the impact of domestic violence during lockdown. Several select performances from the series will also be broadcast as a one-off TV special to air on TG4 later in the Summer.

1 in 4 women in Ireland experience domestic abuse with the problem surging globally during lockdown. An Garda Síochána has seen an increase of 25% of call outs during Covid19 and Women’s Aid has experienced an increase of 60% in calls to the National Freephone Helpline in recent weeks. Now the services of Women’s Aid are needed more than ever.

Thu May 14 , 2020
MEP for Ireland South and Leader of Fine Gael, in the European Parliament, Seán Kelly, has called on the European Commission to come forward with a financial instrument aimed at facilitating easier access to finance for farmers to support their activities as the COVID-19 pandemic continues to impact upon incomes. […] 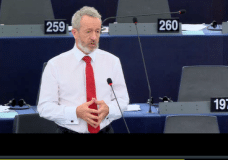