In 1972, British paratroopers stationed in Northern Ireland, opened fired on the Civil Rights marchers, murdering 14 civilians. Images of carnage that occurred that day in Derry on January 30, ‘72, were flashed around world, highlighting the apartheid system that existed in the north. Not only that, it was a major catalyst for IRA recruitment, as many despaired at peaceful tools like protests and politics being crushed by the unionists, British military and the RUC. Its long shadow has never gone away, but the recent ruling in Derry has decreed that one of the paratroopers stand trial for murder. Whether you see this as a beginning or an end – it’s sad, disillusioning and in many ways disgusting to think that it has ‘only’ taken 47 years to get this far.

Historian, Dominic Carol who has featured in this article before, came to mind.  As part of our ‘History of Protest Songs’ series, we created an episode based on Irish music protest songs, which of course feature U2’s bloody Sunday. [I think there may be some readers of this article yet to check out the History of protest songs series. It well worth hearing, especially if you are a lover of music and history. You’ll find it in the listen back section on line on westcorkfm.ie or atlanticradio.ie]

We start the episode looking at the significance and, meaning of U2’s Bloody Sunday. Dominic feels it carries a message of ‘plague on both houses’ mentality rather than an all-out condemnation of the events of the day. Perhaps Bono was protesting more against violence than the politics. He sings, ‘I can’t believe the news today…how long, how long must we sing this song?’ Bono famously sang the song in concert in 1987, on the same day of the Enniskillen IRA bombings which was one of the saddest day of the troubles.  One policeman and eleven civilians across the religious divide were blown up at a First World War public memorial service in the town square.

There is no doubting the sentiment of the next song on our playlist that day. We examined the lyrics and emotion of the Wolfe Tones ‘Men behind the wire’. It was written in protest to internment in the North – arrest for a period without trial or due process – a dangerous power wielded by the British government. The Wolf Tones bleat out the words, ‘Not for them a jury, being Irish meant they’re guilty’, with a catchy chorus and hook, ‘Armed tanks and armed guns came to take away our sons’. It became a number one hit in Ireland in 1972, a week before bloody Sunday. Dominic tells us that by 1975, 2000 men had been interned, 90 percent from the nationalist community.

Christy Moore, synonymous with great folk and traditional ballads, actually wrote protest songs too. In 1977, he had an album, which featured songs about the H-block prison in the North. However, Dominic uncovers a song, ‘The middle of the Island’, which protested against how society turned its back on young girls, pregnant out of wedlock. The haunting opening lines, ‘everybody knew, nobody said’ will haunt many of us who lived in that era.  It was based on Anne Lovett who had to conceal her pregnancy, and dies giving birth alone in a grotto, away from judging eyes. Her baby died too. Of course in 2019, we are all braver at taking stances and having pot shots at fallen institutions, but for Moore to do it 30 years ago, at a time when Irish society was still struggling with its obsession with sin, guilt and Catholic morals, makes it all the more powerful. We also look at a more modern protest song, which challenges religion – Hozier’s, ‘Take me to church’. A voice of a new generation, Hozier’s song is many ways a lament of a feeling of detachment and mistrust of the church. ‘I tell you my sins so you can sharpen your knife’. Even more powerful was the video that accompanied it, which portrayed the savagery of a group of young people when they discover two men in their community are homosexual lovers. Dominic feels the song is an expression of how there is a generation who see religion as an oppressive force rather than a positive one. Seeing that we were examining protest songs, it’s fair to say, we are looking at songs that tend to capture people’s disillusionment of events rather than a celebration. And naturally, people will have a difference of opinion, but ultimately what the show is about, is how music can be used as a tool to protest and rage against burning issues of the time.

So no better place to end it with a little known band called ‘The Rolling Tav Revenue’, who wrote a fun and poignant song about the privatisation of water in Ireland. You can find them on YouTube. ‘Enda Kenny not a penny we won’t pay at all…Irish water’s not for sale’ roars out from a kitchen full to the brim of musicians. It has the feel of a jam session in a college house but the lyrics are powerful, highlighting the most controversial issues in recent history. ‘A million people out in the street all marching to the same beat…we will strike we will fight, Irish water is a human right.’ I think those lads have said it all. The series has also examined protest songs of the American civil rights, campaign, Vietnam War, and apartheid in South Africa. Hope you can listen back to this episode and the other episodes on www.westcorkfm.ie  [or www.atlanticradio.ie – listen back]

Wed Apr 10 , 2019
Photo above : Bantry Credit Union directors, management and staff as well as farmers, representatives of farming organisations, Teagasc advisors and politicians from the Bantry area who travelled to Killarney for the launch of Cultivate. (Photo: Valerie O’Sullivan) Early milking was the order of the day on Wednesday March 20, […] 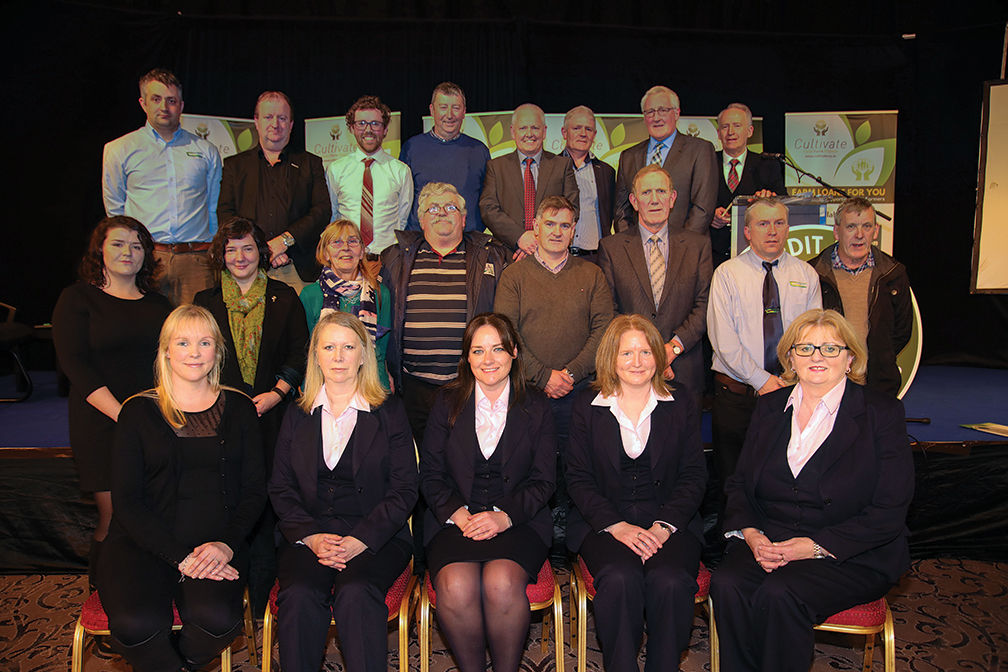