With the opening of Gormley’s Secret Sculpture Garden in Dublin and the landmark ‘Modern Irish Sculpture’ exhibition in Kenmare, it feels like a good summer for sculpture in Ireland. The latter show, which opened on June 2, brings together over 70 works by 34 of Ireland’s top sculptors, on the sprawling industrial floor of the Kenmare Butter Market. It is an ambitious show full of dynamism, synergy, beauty, conflict and incongruity, as you would expect from a large survey exhibition. Curated by John Goode (Director of Mill Cove Gallery), Ana Duncan and Jackie Ball, ‘Modern Irish Sculpture’ delivers in the Butter Market what few other spaces could manage; an art fair-style environment, which, despite the eclectic nature of the objects, manages to feel relatively spacious and harmonious.

Held on one large, open floor, its expansive view, on entry, is at once wonderful and overwhelming; the expanse keeps the viewer looking, yet makes it, at first, difficult to focus. Certain works stand out, both by their size and quality. Michael Quane’s iconic ‘Swimmers’ (‘Anthrobuoyed’ and ‘Wetsuit and Wings’), Martin O’Keefe’s ‘Crescent’, Ayelet Laylor’s ‘Deliquescent’ and Con Gent’s ‘Revealing’ all catch the eye on a first visual sweep. At front and centre, acting as a veritable lightning rod for the show, is Michael Quane’s ‘Aqualung Buoyancy’, a beast and rider carved in Kilkenny limestone. It is an extremely beautiful piece and forms a figurative corollary to the similarly sized abstract limestone carvings by Eileen MacDonagh and Richard Healy, as well as James Gannon’s marble ‘Venus’.

Lines of view through the space reveal a delicate curatorial balance between space, form, aesthetic approach and material. One can follow a limestone ‘trail’ from Quane’s ‘Aqualung Buoyancy’ to MacDonagh’s ‘House’ and ‘Balance’,  Healy’s ‘Apertura Obscura’, and further back to Quane’s ‘Diver’.  Similar threads can be found linking works in marble, steel, wood, glass, copper and bronze.

Looking past groupings of medium one also finds threads of figuration and abstraction of the modern and postmodern. The modern/postmodern binary is an interesting one, as what dominates in ‘Modern Irish Sculpture’ is a modernist language of pared back form, simplified and distilled, often to a totemic, monolithic or relic-like level, such as in Eileen MacDonagh’s pillar-like ‘King’.

Some postmodern elements peek through, however: Redmond Herrity’s marble sculptures of every day objects (such as ‘Jerry Can’), Dirk Hudson’s CO2 cylinders (‘CO2 U Later’) and Con Gent’s ‘Revealing’ play with expectations of image, object and form. They arise from a very different conceptual platform to the modernist work on show, ultimately deriving, in Hudson and Herrity’s case from Duchamp’s ‘ready-mades’, and from the postmodern program of elevating the mundane, and thus deflating sculpture’s millennia-long quest for meaning.

Gent’s ‘Revealing’ plays, in a postmodern, tongue-in-cheek way, with the idea of revelation. A hand and arm carved in wood pulls back a wood-carved curtain, revealing the open space behind it, asking us to contemplate the world rather than it, as an object, turning the idea of sculpture on its head. Herrity does something similar with his work ‘Skin Deep’, an appropriation of the head of Michaelangelo’s ‘David’, with half the head approximating the original and the other half the human skull. By juxtaposing, in carved marble, the skull and Michaelangelo’s iconic image, Herrity playfully deflates the pressure of meaning ascribed to it, whilst also teasing the idea of ‘immortality’ in art.

The presence of these works in ‘Modern Irish Sculpture’ also softly teases the exhibition title. The coexistence of modern and postmodern work on the contemporary stage – and even within individual artists’ oeuvres – is a given, a complex fact of contemporary practice. And perhaps a curatorial distinction, in this case, is not so important, though if there were more postmodern, conceptual works it would be an issue. ‘Contemporary’, rather than ‘Modern’ might then be more appropriate.

One’s experience of sculpture is unavoidably contingent on the environment in which it is placed, a factor which makes an exhibition of this nature as much an art of compromise as a platform for discovery. Seeing O’Keefe’s ‘Crescent’ in a public park or garden, for example, is a very different experience from seeing it in a large enclosed space. An organic environment softens the experience of hard steel, a built environment increases its edge. That being said, the opportunity afforded by this exhibition is a wonderful one, and one could argue the incongruities make it all the more fascinating.

As a whole ‘Modern Irish Sculpture’ provides an excellent introduction to some of Ireland’s most outstanding sculptors. The high quality of the work on show is a testament to an enduring respect for craftsmanship in contemporary practice and to the curators in Kenmare who are as passionate about the work as the artists are. The exhibition runs until July 24 at the Kenmare Butter Market, Kenmare, Co. Kerry. Open Monday – Saturday 10 – 8pm; Sunday 12- 8pm.

Mon Jul 4 , 2022
The outgoing Mayor of the County of Cork Cllr Gillian Coughlan and Chief Executive of Cork County Council Tim Lucey have signed the contract for Phase one of the Bandon Traffic and Public Realm Enhancement Plan with West Cork contractor Pat O’Driscoll Plant Hire and Civil Engineering Ltd., signalling the […] 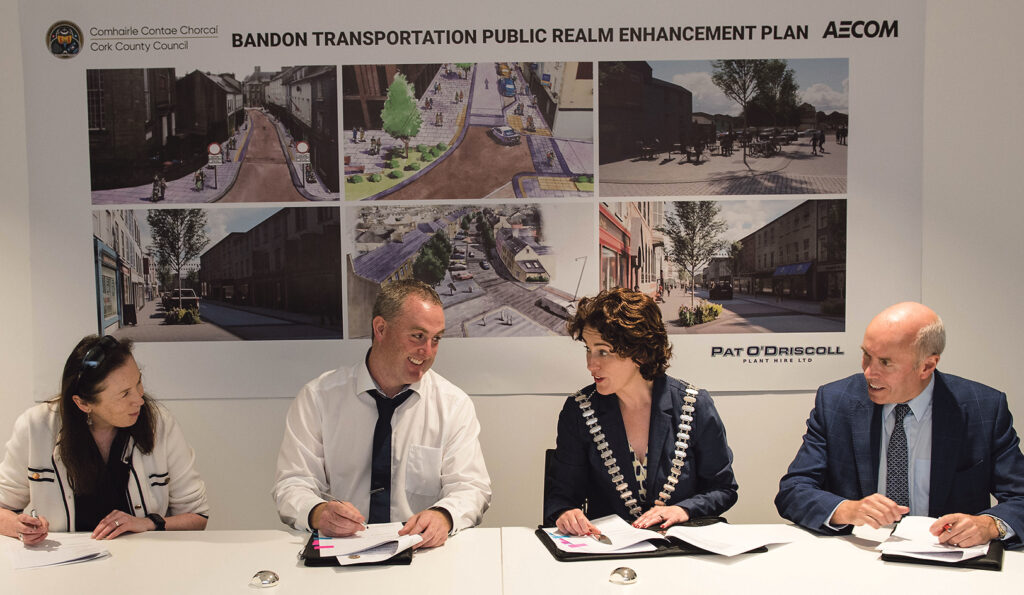