The new Michael Collins mural in Clonakilty, titled ‘Paths to Freedom’, is not only a colourful nod to the birth of the Irish Free State, but also a work which enfolds West Cork into Ireland’s street art revolution. The stencilled mural is today’s equivalent of the medieval fresco; the level of craft and creative ingenuity involved is no less, even within the content perimeters of a state commission. Indeed it is the very language of stencil art, and its appeal to youth culture, that commissioning bodies are seeking to exploit.

Over the last seven years The Walls Project art agency has spear-headed the evolution of street art in Ireland, engaging solo street artists and bringing them together with state and corporate commissioning bodies. ADW Artist was in this way approached by The Walls Project and Michael Collins House for the creation of the ‘Paths to Freedom’ mural. It is one of many projects under ADW’s creative belt, often typified by smart graphic compressions and savvy social commentary.

ADW is no stranger to historical subjects. His Ferns series in County Wexford depicts the 12th century Norman invasion of Ireland by Richard de Clare, known as Strongbow and his subsequent marriage to Aoife Mac Murrough, princess of Leinster. Also facilitated by The Walls Project agency, the Ferns series shows ADW at his finest: a delightful compression of monochrome figure, high-key colour, Celtic and Norman ornament and pattern, and multiple scenes worked into the shape of a single figure. The sprawling ‘Paths to Freedom’ mural is less cohesive in contrast, though no less full of historical detail, depicting three major Independence figures: Tadhg An Asna, Jeremiah O’Donovan Rossa and Michael Collins.

Asked about the Paths to Freedom mural, ADW writes, “I do love a project that you can really get your teeth into, and this one was right up my alley with plenty of research needed to create the correct narrative for the mural. I also worked very closely with Shane from Michael Collins House, who was involved in each stage of the visual drafts before the right one was finally agreed on. We had a great few days in Clonakilty painting the piece and there was a great vibe in the town and amazing feedback from the piece we created.”

On the flip-side of commissions such as the state-sponsored ‘Paths to Freedom’ ADW has created more subversive and witty works, such as ‘Grey Area’ (2018), in affiliation with SUBSET, which depicts grey workmen in a grey world pouring coloured paint down a grey drain. It was created in support of SUBSET’s initiative, challenging the rules governing planning regulations in Dublin, for public artworks, which they saw at the time as prohibitive.

‘Grey Area’ is the kind of smart graphic urbanites might be more familiar with; it is classic stencil-art with a social message, cleverly conveyed, one which nods to the roots of stencil art counter-culture. Asked about how such social messaging can possibly work within the framework of a commission ADW writes: “I think it depends on how brave the client is. Commissions from local councils will choose to be more sympathetic to what the public are viewing, whereas a private commission from a bar/venue or advertising agency could choose to push the boundaries of the content a little more.”

Stencil art, as an urban art form began to appear in the 70s and 80s in North America and Europe. It emerged as unsolicited acts of urban graffiti, like wildflowers of sprayed expression popping up in the proverbial concrete jungle. Legendary artists, such as John Fekner (NY), Blek le Rat (Paris) and Nick Walker (Bristol) paved the way for the likes of the contemporary artist, Banksy (UK), who has since become a household name (though, of course, not his real one).

Over the decades the work of such artists have transformed public perception and debate on the nature of urban graffiti and public art. In Melbourne the city council has designated, for a number of years now, certain city laneways for stencil artists – a legal compromise, which recognises the value of street art culture and that it actually brings in tourism.

In Ireland a major answer to street art legitimacy, for the last seven years, has been facilitated by The Walls Project, not only in the form of commissioned work, but also via its annual Waterford Walls street art festival, happening again this August (see: www.thewallsproject.ie). ADW agrees that The Walls Project has helped shift public perceptions and sees street art as becoming much more acceptable in Ireland.

Dealing with commissions is something of a sea-change for stencil artists, for whom the norm, over the decades has been to flirt with arrest, working late, under pseudonyms, on unsolicited walls, all for the beauty and thrill of it, for peer acknowledgement and the honing of one’s craft.

Business-savvy stencil artists today, such as ADW, facilitated by agencies such as The Walls Project are finally achieving commercial success, both through commissioned work and gallery exhibitions. There is, perhaps, a trade-off, in content and creative messaging. But one might say the same of Renaissance painters who were hired to paint the narratives of church and state. And within the perimeters of commissions the unique creative voice can always be heard (or in this case seen).

Mon Aug 9 , 2021
Uillinn: West Cork Arts Centre hosts ‘La Place des Grands Abysses’, an exhibition of work by Stephen Brandes that runs from now until September 4. A superlative draughtsman who has exhibited internationally, Stephen Brandes explores the interplay of word and visual language as a vehicle for storytelling with particular reference to […] 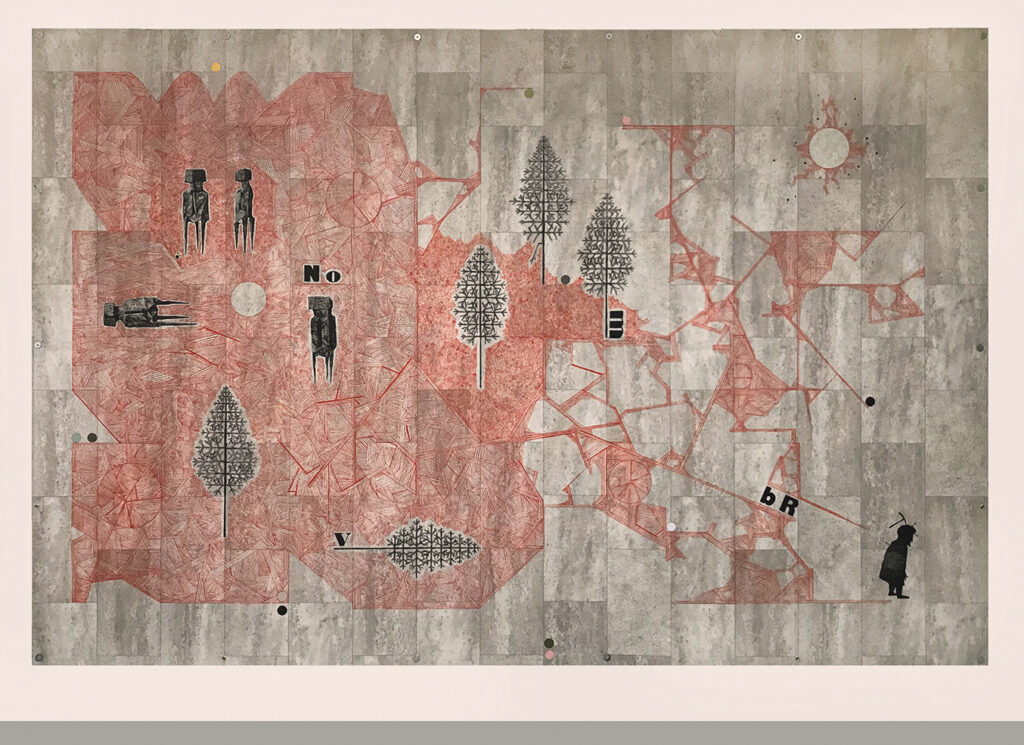