A good deal of the countryside of ancient Ireland was once covered with trees and scrub with hazel one of the most important providers of food. The nutritious nut (cnó) of this tree can be kept for up to a year and must therefore have been a valuable winter food. It is clear that there was a trade in hazelnuts. The ‘Annals of Ulster’ record that in the year 1067 nuts were very abundant. That year was known as the ‘year of the white nuts’ (bliain na cnó finn).

The wild fruit most frequently mentioned in our sources is the wild apple (fiaduball in old Irish; úll fiáin in modern Irish). Because of this the wild apple-tree is included among the ‘seven nobles of the wood’ i.e. the seven most valuable trees. The other six are oak, ash, hazel, holly, yew and pine.

Archaeological evidence confirms that many kinds of wild fruit were consumed. Blackberry and elderberry seeds, dated by radio-carbon to the eighth or ninth centuries have been excavated at Scotch Street, Armagh. An 11th century pit in Winetavern St. Dublin contained a large variety of wild fruit, including rowanberries, blackberries, wild apples, sloes, hips and haws. Acorns, normally valued as food for pigs, were consumed by humans when other more palatable food was in short supply.

The importance of bilberry is clear. Seeds from the fruit (Irish fraochán, anglicised fraughan) are common in the excavations of Viking and Anglo-Norman Dublin. The townland of Frehanes in Rosscarbery parish, West Cork, is derived from fraochán. The last Sunday in July was up to recent times known as Bilberry Sunday, Fraughan Sunday or Garland Sunday.  In Irish folklore there are vivid descriptions of people dancing, singing, making garlands, storytelling and gathering fraughans or bilberries at lakes, holy wells, or more usually on hills or mountains.  The last Sunday in July is still, of course, a day for climbing mountains or hills, the most famous being Croagh Patrick, Co. Mayo.  Another plant related to the bilberry is the cranberry, which grows in bogs; it is known in Irish as mónán or mónóg, which comes from móin, the Irish for ‘bog’.

It is likely that a wide range or wild herbs and roots were eaten in ancient Ireland, particularly in times of famine, and by landless people on the margins of society. Among these certainly were wild garlic (creamh), also known as ramsons; watercress (biolar); nettle (neantóg), and wood-sorrel (seamsóg).

The roots of a number of wild plants were eaten; of these the most prized seems to have been pignut (cúlarán in Irish, also known as cnó arcáin, cnó milis, cnó talún etc), bitter vetch (corra meille) and silverweed (brioscán). Wild garlic is a frequent plant of woods and damp shady places. It was a valuable food source and was prized for its medicinal properties. Garlic is rightly regarded as a great food and its wild variety is used today by many famous chefs. In Irish folklore wild garlic was a metaphor for sharpness or bitterness. Chomh searbh le craomh  – as bitter as wild garlic was a Donegal saying. Nevertheless, cloves of wild garlic were sometimes planted in the thatch over the door in Irish cottages for good luck. Its importance as a food can be gauged by the old Irish Brehon laws, one of which was a fine of the value of two and a half milch cows for taking wild garlic, seaweed or wild apples from private land without permission. In more recent times, in nineteenth-century Ireland, wild garlic was often used to flavour butter instead of salt. In Irish folk medicine wild garlic was highly valued as a preventative of infection, as well as a cure for coughs, cold and flu. It was also believed to clear the blood of impurities and wounds of infection, and to cure toothache.

Edible seaweeds were also collected by people along our shores and on the offshore islands. The inedible seaweeds were an important fertiliser by the sea and on the islands. On the islands of West Cork each householder had a portion of the shore designated to them, as well as offshore rocks and skerries. Seaweeds used in human diet supply iodine, iron and other trace elements. In modern times the best known edible seaweed is Carrageen Moss, full of useful medicinal and nutritional goodness. In ancient Ireland the most prized was duilesc (duileasc in modern Irish), generally anglicised ‘dulse’. It appears that it was hung up in a sheaf, from which a handful was taken as required. One verse in the tale Cath Fionntrá (The Battle of Ventry), praises the sea produce of the islands of the south-west of Ireland. One verse goes like this: Iascach mara muiride/a críchaib Baí is Béire, /medbán Faíde fírglaine. /duileasc a cuanaib Cléire (sea-fishing of the sea from the regions of Dursey and Beara, laver of truly clean Whiddy, dulse from the inlets of Cape Clear).

Remembering the victims of the Upton Ambush 100 years on

Tue Feb 9 , 2021
Shortly after 9am on February 15, 1921, a train heading westwards from Cork City, pulled in to Upton railway station, midway between Crossbarry and Innishannon. One of its carriages was carrying members of the dreaded Essex Regiment and IRA Brigade Commander Charlie Hurley was lying in wait with an ambush […] 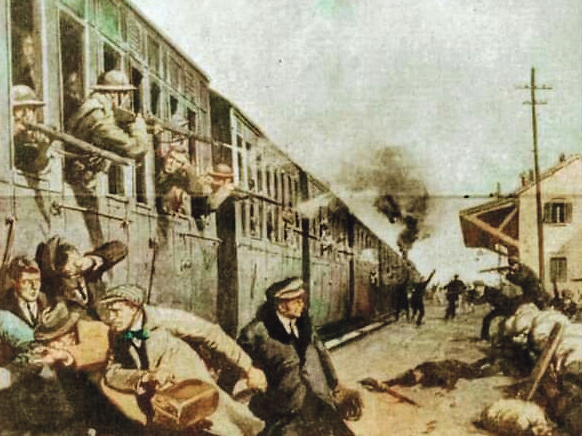