‘Ní hé lá na báistí lá na bpáistí’ (the day of rain is not the day for children). Anyone who has ever tried to entertain young children when it is too wet to go outside – especially on holidays – will appreciate the accuracy of this proverb. There is hardly anything like relentless Irish rain to achieve the twin feats of dampening people’s spirits and increasing their irritability. Talking about the weather is a constant theme when Irish people meet. In a metaphorical sense, people speak of being ‘under the weather’ when they feel unwell or of ‘making heavy weather’ of a task when it proves to be unexpectedly difficult. The misery of working in inclement weather has long been recognised in Irish folk wisdom. For example an old saying warns us of ‘the four worst things – ploughing in frost, harrowing in rain, making a ditch in summer and building a wall in winter’.

Nevertheless, climatic adversity has inspired many Irish writers. The damp tapestry of Frank McCourt’s early life is evoked in his book, ‘Angela’s Ashes’, in a vivid account of how ‘great sheets of rain gathered to drift slowly up the River Shannon and settle forever in Limerick’, thereby creating ‘a cacophony of hacking coughs, bronchial rattles, asthmatic wheezes, consumptive croaks’.

It is notable that certain Irish weather phrases are very poetic and rich in imagery. For example, a cold morning has been described as one which causes people ‘to kiss their knee-caps’ (ag pógadh na gcopán) or to curl up in bed with their knees underneath their chins. We are preoccupied with the subject because Irish weather is quite capricious and unpredictable. Supporting this view, an Irish phrase describes the many different weather conditions that one can encounter on any given day, ‘Lá na seacht síon – gaoth mhór, báisteach, sioc agus sneachta, tintreach, tóirneach agus lonrú gréine’ (On the day of seven weathers, there is high wind, rain, frost and snow, thunder, lightning and sunshine).

Some people are never happy with the weather even when it is pleasant. Consider the old Irish saying: ‘Dá mbeach soineann go Samhain, bheadh breall ar dhuine éigin’ (If fine weather lasted until November, somebody would be complaining).

In the interests of economical survival, people, especially fishermen, sailors, farmers and shepherds have tried to anticipate impending weather conditions through careful observation of a variety of natural phenomena. Long before the advent of scientific weather forecasting, changes in the appearance of the sun, moon, stars, clouds and waves were studied to forecast weather. These observations were passed down from generation to generation, often termed in rhymes and easily remembered sayings. A common weather saying, ‘Red sky at night, a shepherd’s delight, red sky in the morning, shepherd’s warning’ dates back to biblical times. The significance of red skies is echoed in several Irish phrases: Dearg anuas, fearthainn is fuacht, / Dearg anoir, fearthainn is sioc, / Dearg aníos, fearthainn is gaoth, / Dearg aniar, soineann is grian. (Red high up, rain and cold; Red in the east, rain and frost; Red low down, rain and wind; Red in the west, fine weather and sunshine).

The sun and the moon were significant omens for the ancient Irish. In the pre-Christian era, the sun was portrayed as a god of the heavens which lay down in the evening. Perceived in this way, the sun’s long rays were interpreted as its legs. Certain weather signs could be detected from the position of these ‘legs’, For example, we hear ‘Togha na haimsire chughainn – cosa na gréine suas ar maidin agus síos trathnóna’ (the best of weather is coming – the sun’s legs are up in the morning and down in the evening).

The appearance of the moon was a good indicator of the weather. For example, bad weather was likely if the moon appeared to be lying on its back. The harvest moon in September (nearest to the autumn equinox) is the brightest of the year. ‘Gealach na gcoinleach is gile sa bhliain’ (the moon of the stubble field is the brightest of the year). A similar phenomenon occurs around mid-October and is known as the ‘hunter’s moon’.

Other weather signs that feature in Irish folk sayings come from the wind, mist, the sea – the appearance of the sea and the sound it makes. The following saying distinguishes the different types of wind. ‘Trí bríos gála, trí gála feothan, trí feothan stoirm, trí stoirm airic’ (Three breezes make a gale, three gales make a winnowing wind, three winnowing winds make a storm, three storms make a hurricane). These winds were sometimes described in graphic terms. For example a harsh east wind was regarded as one that would ‘skin a dog-fish’ – ‘Gaoth a bhainfeadh an craiceann difhíogach’.

Strong winds were often attributed to the movement of the ‘sí’  (shee) or fairies. A whirlwind in summer was called a ‘sí gaoithe’ – a fairy wind, which was also known as ‘deamhain aeir’ (demons of the air). Another cause of the wind was a mythical being called ‘Beartlaí na Gaoithe’.

Many old Irish weather sayings have a solid foundation in scientific fact. In Cape Clear they used to call a moon with a halo around it, ‘súil circe ré’ (the moon of the hen’s eye). Another phrase to indicate this is, ‘Garraí na gealaí-báisteach’ (a garden around the moon means rain soon). A ring or halo around the moon indicates the presence of cirrus clouds which precede low pressure weather systems containing moisture. Also quite accurate is the old observation that low flying swallows herald the arrival of rain (Fógraíonn fainleoga ísle doineann) – low flying swallows portend bad weather.

When distant objects appear nearer than usual, or when distant sounds can be heard more clearly, are certain signs of wet weather approaching. This is evident in phrases like ‘Glór an easa i bhfad uait – dea aimsir; drochaimsir más gar duit’ – good weather is due when the sound of the waterfall is far away; a bad spell is due when the waterfall is audible. If, for example, you are looking at Cape Clear from the mainland and it appears closer than usual, this indicates the approach of bad weather. This is confirmed in a similar saying: ‘Droch-chomhartha ar mhuir an léargas a bheith go maith’ – if there is good visibility at sea, bad weather is coming.

Mist was also considered a weather sign. A particular worry was the ‘ceo sí’ or ‘ceo draiochta’ (fairy mist or magical mist), which could descend without warning, disorientating a person and perhaps signalling his or her death. Like the wind or clouds, the pattern of mist was held to foretell the weather. Thus, ‘Ceo soininne ar abhainn, ceo doininne ar chnoc’ – mist of good weather on a river, mist of bad weather on a hill.

The appearance of and sound of the sea were used to foretell weather. For example, bad weather is thought to be due when ‘white roads’ are visible in the ocean (Doineann má bhíonn cúr ar bhóithríní bána tríd an bhfarraige).  When the sea is foamy at high tide, this is a sign of bad weather – ‘Garbhadas amárach má bhíonn go leor cúir in aice an chósta, lán mara’ – rough weather tomorrow if there is a lot of foam near the coast at high tide.  The moaning or other sounds made by the sea is an accurate indicator of weather.  However, one would have to live near the sea and listen to its varied noises to be able to use it to forecast weather.

Birds and animals feature in a number of Irish weather signs. An example is the following: ‘Aimsir chrua thirim nuair a bhíonn an corr éisc suas in aghaidh srutha chun na sléibhte; fearthainn nuair a thagann sí an abhainn anuas’ (When the heron flies upstream to the mountains the weather will be dry but rough; when she goes downstream, it will rain). It is held that curlews call before rain, something I have observed myself. Wet and windy days are also regarded as imminent when oystercatchers call: ‘Fliuch gaofar is na roilligh ag éagaoin’ (wet and windy when the oystercatchers cry).

In the case of robins, however, location was important in signalling weather changes. For example, ‘Má bhíonn an spideog faoi thor ar maidin beidh sé ína lá fliuch’ (if a robin hides beneath a bush in the morning, rain is on the way). The significance of a robin sitting high up on a tree is conveyed in the expression: ‘Dea-shíon an spideog ar bharr na gcrann’ (good weather when the robin is high on the branches).

A change in the weather can also be expected if bees are busy after sunset. ‘Beach ar saothar agus an ghrian faoi – athrú aimsire’ (the bee working after sunset, a change in the weather).  When seals travel up the strand away from the water is an indication of bad weather: ‘Drochaimsir má thagann an rón isteach i mbéal an trá’. When a herd of cows lie down in the middle of a field indicates coming rain: ‘Báisteach chugainn: tréad buaibh in aice le chéile i lár páirce nach mbeach fonn orthu éirí’ (Rain coming if a herd of cows lie close together in the middle of a field).

Some weather proverbs are not meant to be indicators of weather change but are meant to have a message. The expression, ‘Tiocfaidh lá fós go mbeidh gnó ag an mbó dá heireaball’ – a day will come when the cow will have a need to use her tail. The reference to the cow’s tail comes from the fact that in warm weather, a cow will swat flies with her tail. So this proverb is intended as a riposte to people who complain too much about bad weather as it suggests that good weather may be on the way. Similar sentiments are expressed by the proverb : ‘Níl aon ghaoth ná séideann maith do duine éigin’ – There’s no wind that doesn’t blow in the right direction for somebody – which has its English equivalent in, ‘It’s an ill wind that blows nobody good’,  indicating that circumstances that are unfortunate for one person may be of benefit to another. 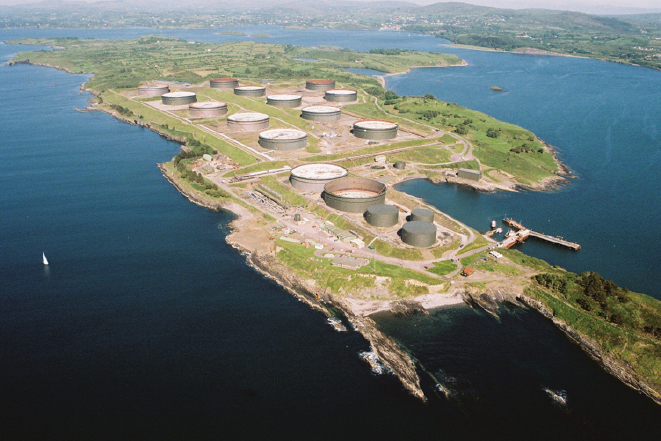