Well Brexit has finally come to pass. The knock-on effects will become clearer with time. Perhaps they would be more obvious if the UK’s time outside the EU began in a world free of Covid-19. However, with travel restricted and extra logistics already required, it’s a bit tricky to pick out the exact changes yet; so it’s a case of sit and wait to see what happens.

There are noticeable differences between the latest Covid lockdown and the first one. Last year with the closure or restaurants and takeaways, beef price took an immediate hit. As society has adapted there is less of a panic on the takeaways in particular and, as a result, meat prices have held pretty well. Indeed since the New Year, there has been a lift in prices for beef and more noticeably for sheep meat. Milk price has remained relatively stable in comparison.

Marts seem to be the main ones affected by the latest level 5 restrictions. They are strictly online only for the next number of weeks.

Over Christmas, I found recent stats for suckler cow numbers. They were broken down into herd size recently and they made for interesting reading. I’m a terrible man for being distracted by statistics and maps. Useful for quizzes but not a lot else.

What stood out for me was the fact that there is a similar number of suckler farmers with nine cows or less than there are dairy farmers. Even within the suckler herd, there is disparity.

There are almost as many suckler herds with five cows or less than there are herds of over 30 cows.

Cow numbers always come up when climate change in Ireland is mentioned and I can see the Irish cattle herd contracting organically over the next decade or so. There will be succession issues on farms across both bovine disciplines. On top of that, a rise in dairy numbers will be stymied by environmental constraints and a disparity in income with their peers will see a fall off in those running suckler herds.

The daily farm routine is relatively mundane at the moment. It’s a case of feeding and looking over stock. Preparing the sheds for calving and fence maintenance will be the main jobs for the next few weeks. All the young stock are on a diet of silage with the bull calves getting some ration. The heifer calves are on silage only with an odd treat of ration during the week. The reason for this is they will be the first going to grass and that is a cheaper than giving them purchased in feed. If weather doesn’t get too extreme, I hope to let the smaller weanling out to grass by day soon. Ration will be used as a tool then to get them in. They can be trained easily enough and become very familiar with routine.

The weekly feeding regime for the cows is currently about five days silage; and hay or straw feed once that is gone. The reason for mixing the diet up is that the cows are carrying a good bit of condition; if they are too fat, this could lead to difficulties at calving. The heifers that are due to start calving in late February will be seeing their hay intake increase to try and ensure a smooth calving.

The window for spreading slurry has opened again, so getting that out onto the fields that need it most will be a priority. The decisions on where to go will be determined by ground conditions, soil sample results, how much grass is on a paddock and how soon it will be needed for grazing. There was good grass growth through most of December so covers are strong on the paddocks that were closed earliest. Growth eased off then during the cold snap in early January. There’s a bit more to slurry than meets the eye!

On a related topic, in early December, I attended an online information meeting as part of the ASSAP programme last week. ASSAP is the Agricultural Sustainability Support and Advice Programme. It is a multi-agency programme run by the Department of Housing and it works with farmers on improving water quality. In general water quality in West Cork is in good order, however there are a number of catchments that have seen their water quality decrease. A lake in our catchment has gone from a poor standard in the 2008-2013 EPA water quality report to bad in the latest report. So there is going to be an extra effort put in to improve the situation.

The event was useful and helped get a handle on what is required and what can be done at a very local level to improve water quality.

While there are potential domestic and agricultural sources behind the deterioration of water quality, the extra focus on the catchment will go a long way to resolving the issue. There hasn’t been a dramatic increase in cow numbers and while there has been an increase in domestic dwelling over the last 20 years around here, it’s not like a town has developed at the same time. The issue for farmers is that when it comes to nitrates, 99 per cent of them are as a result of farming activity.

I think water quality will be driver of what agriculture can do in future. The results will drive policy on a macro level and farm practice on a micro level. Like other businesses when it comes to putting a business plan in place in future rather than it being a straightforward financial projection you will now have to keep a look out on which way the wind is blowing in terms of environmental policy or other developments in the locality. Some farmers will face a bigger culture change than others but it will impact us all across the sector. It doesn’t just apply to farmers either. It will impact all businesses and when it comes to water quality, everyone has a role to play.

If the blame were put at farmers’ doors without science behind it, we’d be looking for scientific results. Now, because the results will lead to a change in the status quo, we can’t just dismiss them.

Whatever happens, it will be interesting to see how water quality can be improved in the lake over the next few years.

Carbery Housing Association recognised for its work in sustainability

Tue Jan 19 , 2021
Skibbereen-based CLG, Carbery Housing Association (CHA), was awarded a commendation for its work in sustainability by Cork Environmental Forum at an online ceremony on December 10. The Mayors of Cork City and County paid tribute to the work CHA has done over the past 15 years and the award was accepted by […] 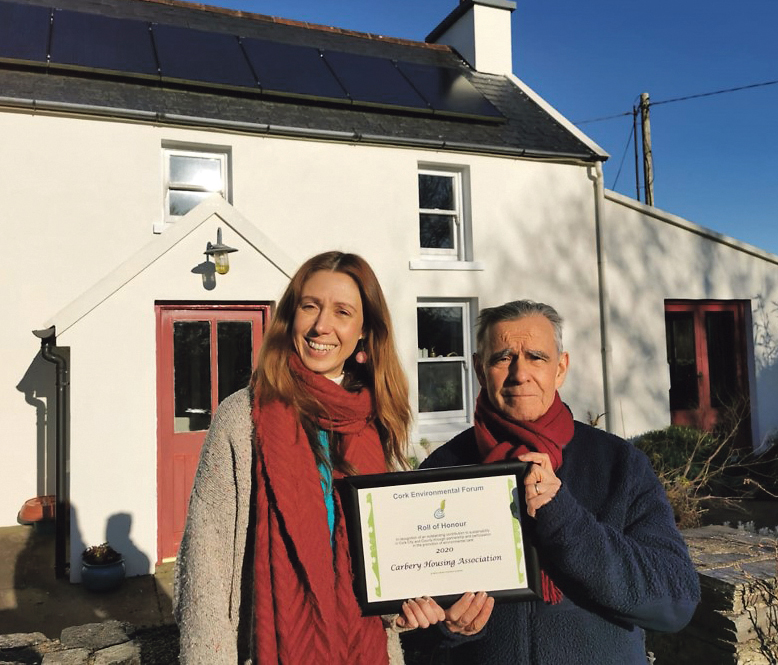