Winston Churchill said famously when speaking of Russia, it is ‘a riddle wrapped in a mystery, inside an enigma’. The same can be said about James Joyce’s ‘Ulysses’ that was published 100 years ago this year. The novel, which took seven years to write, did not garner much interest in Ireland and indeed was buried under more pressing news of the Treaty and the debate that followed the end of the War of Independence, much to Joyce’s disgust. Not uncommon for the time, much of it was serialised in a New York journal, leading to an immediate censor for immoral and inappropriate content. Much like what prohibition did for drink in the United States, trying to censor a novel with ‘dirty bits’, only created a desire or curiosity to seek it out, probably while sipping on some illegal moonshine inside a speakeasy. It took another ten years and the championing of it by top writers such as Erza Pound and T.S Eliot, for it to become legal to buy the book in mid-thirties America and Britain. Though never actually banned here, it wasn’t until the 1950s that you could find a copy on the bookshelves in Irish shops. So where do you start with a novel that some many of us have heard of, yet so few have read. Does it belong to the elite or was it meant for us all?

I’m currently on my fourth attempt, that dates back to my first failure to read it twenty years ago. Finally, I am making some headway and beginning to enjoy it. I put it chiefly down to one key difference. I am using a reader’s guide. Terence Killeen’s, ‘A Reader’s Companion to James Joyce Ulysses’ is a brilliant book in itself. It contains great summaries of chapters, explanation of key personalities, a glossary of words and a simple commentary that explores the text. If you never want to embark on Ulysses, then this book alone would make a stimulating read. But it begs the question, how can it be a great ‘novel’ if one, (outside a very small elite of scholars or bright and persistent readers) must navigate the text using a guide, or either gets lost or bamboozled by it all? I’m going to do my best and try to break down some of the worlds most-talked-about novel, all in a few hundred words!

Firstly, what is it about?

In a nutshell, the story follows a day in the life of its chief protagonist, Leopold Bloom around Dublin on June 16, 1904. [That’s where we get Bloomsday, the day Ulysses is celebrated nationally and internationally.] The first barrier to break, in my opinion, is not to look for a plot. Joyce’s book captures the conversations and characters one would find on a Dublin day in 1904. Bloom [it’s thought the first three chapters are written from Stephen Dedalus point of view] simply wanders around Dublin, meeting people, eating and drinking and conversing with the many characters he encounters during the day. It is often said the best way to enjoy Ulysses is to listen to it and I can understand that now. Reading Ulysses is the ultimate eavesdropping. You are not only privy to the private conversations, but Joyce takes you inside Bloom’s mind [and Stephen’ and Molly’s] and we get to listen to their thoughts. Central to the story is his concern about his wife Molly Bloom, an opera singer, who is having an affair with Blazes Boylan, who is also in the music business.

It’s not a plot that would get the pulses going right? So, what’s the big deal?

The genius behind Ulysses is in the structure and writing. But this is the part that also makes if difficult, inaccessible and objectionable for many people. Let me break it down. Joyce’s eighteen chapters loosely are related to Homers Odyssey, an epic Greek poem. So, if you want to unlock significant parts of the story, then one must understand the Odyssey by Homer. Perhaps a hundred years ago Greek and Latin language and literature was commonplace in schools, but certainly for several generations now, we no longer study the classics in school. Without a reader’s guide, most of us will be absolutely clueless about the comparisons, and even with a guide, we only scratch the surface of the classical tale. Ulysses [Greek name Odysseus], had not returned home after the Trojan wars and was ‘lost’. The poem chronicles the adventures he undertakes to return. In some way, Joyce was portraying that ordinary men and women can be the heroes of their own daily toils, each having to overcome obstacles and difficulties in our lives. Such as it is for Bloom, in the one day this book narrates, on his journey home to Molly. Joyce gave a publisher friend Stuart Gilbert a ‘schema’ in 1921, which helped break down his chapters. Simply put, it is a list that equates each of his chapters to an episode in the Odyssey. Also on that schema is the scenes, time of day, organ, art colour, symbol and technical style Joyce employs in each chapter of Ulysses. Perhaps Joyce realised that people would be lost without this guide. It certainly has helped scholars, uncovering the layers of meaning and symbols.

Why did he make it so damn complicated?

The paradox of Joyce’s Ulysses is what makes it famous; it is also what makes it difficult and inaccessible. Joyce, and others like him, wanted to change how novels could be written. For 100s of years, stories were weaved around plot, characters and conflict. Joyce believed a novel could be so much more than a vehicle for a story. In Ulysses, Joyce writes in a range of styles that shows his control and mastery of the English language. Some chapters are peppered with newspaper headlines, others are monologues and Molly Blooms chapter is written in a stream of consciousness that capture her thoughts and thus no punctuation is used in the whole chapter [well, two full stops!] After all, we don’t dream think or fantasise in punctuation! As well as weaving Greek mythology into it, each chapter has a link or comment about Shakespeare’s Hamlet [again problematic for most people who have not read Hamlet. This comes to boiling point in chapter ten, when his characters refer to a wide range of Shakespearian characters and plots] He employs clever conceits, by dotting his work with references to certain organs in the body. He writes in great detail about things that would never have been conceived of before like going to the toilet [I mean it] or watching people eat their food, or ramblings and thoughts that drift in and out of our heads that have no connection to each other or any story [again, what makes some chapters exceedingly difficult to follow]. Throughout the book, he pockmarks it in phrases of Greek, Latin, Italian, French, Hebrew, German, old English and some Irish. It makes for great colour, but not great comprehension unless you are a linguist or have a reader’s guide.

In my early attempts to read Ulysses, I used to wrestle with it, now I just try to ‘listen’ to it, as I read. That for me is the key. Listen into the world of Bloom, Stephen Deladeus, and the characters he creates. Take a journey with him around Dublin and let yourself be brought back to Edwardian times. Joyce’s detailed description of Dublin is genius in itself, seeing he had been in self-exile from the country from 1904 and rebuilt Dublin from his memory and correspondence with family and friends. Terrence Killeen sums it up best for me. He says, ‘Ulysses is not about making a point, but about creating an environment in each episode.’ The trick is trying to savour the environment and allowing yourself to be submerged in it. What also makes this book particularly interesting, is despite the many nationalist agendas and international crisis of the time of writing, Joyce manages to create a book where none of that influences his story. He was a pluralist and stood against the narrow parameters of church and nationalism. And though it very much is a book set in Edwardian Ireland, it is timeless because it didn’t hang its plot on the aforementioned influences that were permeating so much other literature in that period. The fact that Bloom is an Irish, Jewish man is highly unusual and not in keeping with the stereotypical Irish narrator.

Is it the greatest book ever written?

Reading is subjective, so what one person finds stimulating, could be a bore for someone else. Perhaps a tangible comparison would be the Beatles. Some loved them, some hated them, but I think we all can admit, they change how the pop song was conceived. They evolved from simple, catchy tunes to complex themed albums with orchestral music at their centre. Joyce was attempting to do a similar thing for literature and change how people conceived it. His novel has driven me mad at times, but now I am beginning to at least appreciate it, if still not understand it fully. Let me end by using something I tell my own students. Oftentimes students, when faced with a complex poem, question the validity of studying them. I say to them, if you want to read some lyrics with a simple meaning, read a nursery rhyme. If you want to read lyrics that challenge you, read a poem. Joyce certainly challenges us. It doesn’t make one form better than another, but they have different functions. Does Ulysses deserve to be called a great novel if most of us fail to read it because of its complexities? The debate I’m sure will go on.

The Winchester mansion: The house built with gun money for ghosts

Mon Mar 7 , 2022
“Do I believe in ghosts?… I am prepared to consider evidence and accept it if it satisfies me.” – M R. James The Winchester mansion in San Jose, California was built by Sarah Winchester with the proceeds of what she considered to be ‘blood money’. Its sole purpose was housing […] 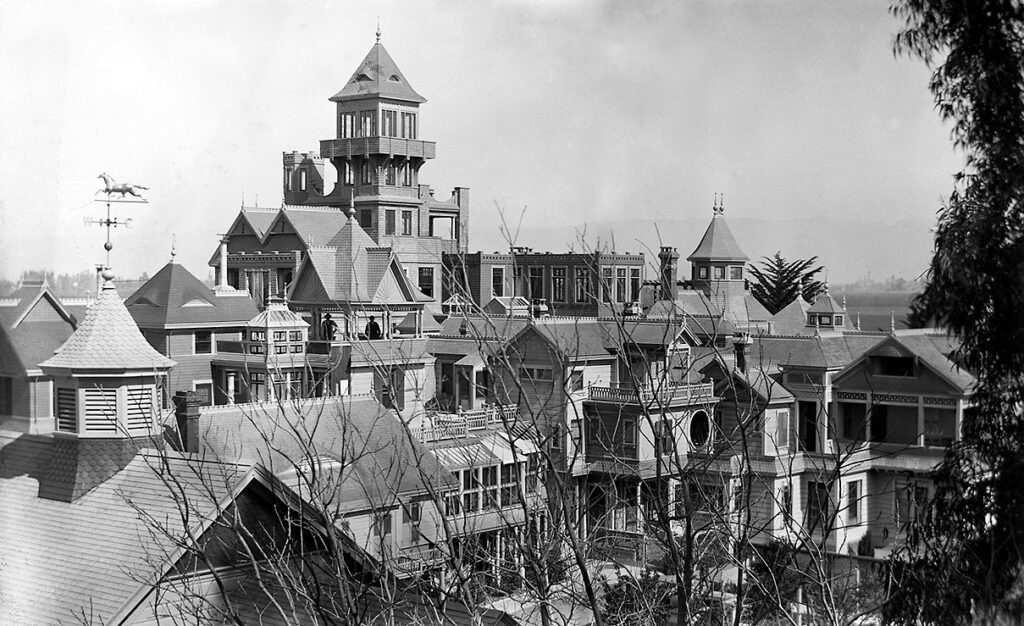