“Do I believe in ghosts?… I am prepared to consider evidence and accept it if it satisfies me.” – M R. James

The Winchester mansion in San Jose, California was built by Sarah Winchester with the proceeds of what she considered to be ‘blood money’. Its sole purpose was housing the ghosts of the dead people whom Sarah believed were haunting her.

Sarah Winchester was the wife of William Winchester, the owner of the Winchester Repeating Arms Company and producer of the famous Winchester Rifle. Due to a very peculiar series of events that happened in quick succession, Sarah, very abruptly, became heiress to the entire Winchester fortune: this meant, as well as inheriting 500 million dollars, she also held a 50 per cent shareholding in the biggest and greatest gun and ammunition manufacturing company that had ever existed.

Prior to her husband’s death however, Sarah had begun to feel uncomfortable with the way in which the family money was earned. The Winchester family had accumulated enormous wealth and benefitted greatly from the deaths of what would become millions of people throughout the world. Although Sarah never took up a position within the company, her stake afforded her an income of the equivalent of 26,000 dollars a day. This burden, as Sarah saw it, led to possibly the most bizarre and extraordinary house ever being built – the Winchester Mansion.

The famous Winchester rifle had many variations before it became the gun we know today. Still an icon in modern day, the Model 1873 was one of the most successful Winchester rifles of its day, with Winchester marketing it as ‘The Gun That Won the West’. It was manufactured between 1873 and 1923. The company made a name for themselves as one of the first to mass-produce firearms with the ability to fire multiple rounds without reloading. In particular, the 1873 model was incredibly popular with settlers but it was its use in movies featuring John Wayne that led it to becoming a huge success and  cultural icon. The Model 1873 went on to sell 720,000 units and was used in wars all over the world; at the same time making Oliver Winchester exorbitantly rich.

The only son of firearms manufacturer Oliver Winchester, William was heir to the Winchester Repeating Arms Company. His wife Sarah bore a daughter named Annie Pardee Winchester who died just 40 days after her birth from a rare disease. By some accounts, Sarah never quite recovered from the death of her infant daughter and, though she and William remained married, Sarah became increasingly distressed, often over the source of the company’s — and thus her own — wealth. In her eyes, the Winchester family business profited from death, something she couldn’t cope with. To further complicate matters, William’s father Oliver died in 1880, leaving the company in the hands of his only son. Then, just a year later, William himself suddenly fell ill and died from tuberculosis, leaving everything to Sarah.

As the majority shareholder in a company that she despised and holding a rich inheritance that was amassed through war and death; with her distress at this exacerbated over the death of her own child, Sarah began to believe that the ghosts of everyone killed by a Winchester rifle were haunting her.

Sarah visited a medium who told her she would continue to be haunted by the spirits of the dead unless she did something to appease them. His advice was to build a home for the lost souls so that they could roam freely. The alternative he told her was to be haunted forever and eternally damned. Sarah believed that the spirits would not enter the house until it was fully built, which is how the Winchester Mansion became what it is today. In 1884, she decided to purchase an unfinished farmhouse in the Santa Clara Valley and continually improve and add on annexes and different rooms to it, which meant the building was continually under construction. Before long, the house was seven stories high.

An earthquake in 1906 reduced its height to the four stories it is today. Approximately 78,000 litres of paint were required to paint this mostly wooden house, which was built using a floating foundation that is believed to have saved it from total collapse in the 1906 earthquake and the 1989 Loma Prieta earthquake. This type of construction allows the home to shift freely, as it is not completely attached to its brick base. There are 161 rooms, including 40 bedrooms and two ballrooms, as well as 47 fireplaces, over 10,000 panes of glass, 17 chimneys two basement levels and three elevators. Sarah requested the carpenters install false entrances, doors that didn’t open into a room but instead led to a four storey drop, stairways that led to nowhere and hidden rooms; the thinking behind this was that the ghosts, if they were able to enter, would be in a consistent state of confusion so unable find her.

In addition to making these strange modifications, Sarah made quite a few additions for herself. Luxury fixtures adorned the mansion, including parquet flooring, crystal chandeliers, gilded doorways, and even stained glass windows handcrafted by Tiffany and Co’s first design director Louis Comfort Tiffany. Mrs. Winchester never skimped on the many adornments she believed contributed to its architectural beauty. Many of the stained glass windows were created by the Pacific American Decorative Company. Some were designed specifically for her, and others by her, including a ‘spider web’ window that featured her favourite web design and the repetition of the number 13, another of her pre-occupations. This window was never installed but exists in the so-called ‘$25,000 storage room’ – so named because its contents were originally appraised at a value of $25,000. The value today is inestimable, but $25,000 would be equivalent to $387,000 in 2020. A second window was designed by Tiffany himself so that when sunlight strikes the prismatic crystals, a rainbow is cast across the room. The window was installed in an interior wall in a room with no light exposure, preventing the effect from being seen. Sarah Winchester made quite the name for herself thanks to her fixation with the afterlife.

In September 1922, Sarah Winchester passed away peacefully in her sleep. Immediately on her death, construction stopped at the house, which she had bequeathed to her secretary and niece, who sold it at auction. The property was subsequently leased for ten years to John and Mayme Brown, who eventually purchased the house. In February 1923, five months after Winchester’s death, the house was opened to the public, with Mayme Brown serving as the first tour guide. Today the home is owned by Winchester Investments LLC, a privately held company representing the descendants of John and Mayme Brown. The home retains the unique touches that reflect Mrs. Winchester’s beliefs and her reported preoccupation with warding off malevolent spirits: The number 13 and spider web motifs, which carried spiritual significance for Sarah, occur throughout the house. It is still open to the public as a tourist attraction.

Mon Mar 7 , 2022
Ciarán was born in 352 on Cape Clear Island off the coast of West Cork. His mother was Liadhain who was of the Corcalee tribe of West Cork (the main sept being the O’Driscolls), while his father was Lughaidh of  Ossory (Co. Offaly) which was also part of the Corcalee […] 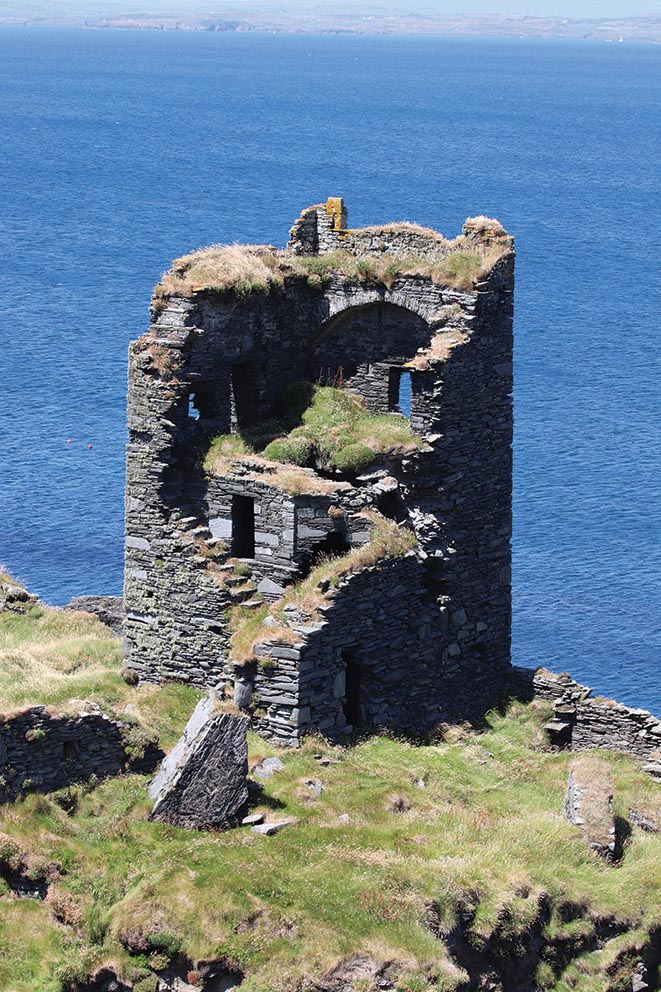